Can pig-human chimeras meet our growing demand for transplantable organs?

This article or excerpt is included in the GLP’s daily curated selection of ideologically diverse news, opinion and analysis of biotechnology innovation.
Every day in the United States, 20 people die while waiting for a kidney, liver or heart transplant. It’s sort of the twisted downside to all of the improvements our society has managed in areas of automobile safety and trauma care. More people are surviving accidents and injuries that might have killed them 10 or 20 years ago. On top of that, medical advances are helping us do a better job of keeping people with organ failure alive. So the supply of donor organs is shrinking even as the demand for transplants is growing.

With this in mind, it’s no surprise that scientists are trying to figure out how to make transplantable organs. For years, efforts have focused on human stem cells, the blank canvas cells in an embryo that differentiate into all the other cells of the body. But it turns out stem cells in petri dishes can’t be made into usable tissues and organs very well. So scientists are exploring ways to get them to grow inside the embryos of other species, creating a chimera — a term, taken from Greek mythology, meaning an animal made of different species.

Two papers show this is possible. One demonstrated that we can create chimeras using human stem cells implanted in a pig fetus. While the process was not efficient, some of the embryos survived long enough to reach a pre-determined destruction date (set for ethical reasons). Of those that survived, most had human cells incorporated into the pig fetus. A second study showed that diabetic mice could be cured by growing donor pancreases in rat-mice chimeras.

Despite 90 million years of evolution separating human and pigs from our last common ancestor, we share a remarkable amount of biology. Human-mouse and human-rat chimeras have not been successful, probably because the differences between humans and rodents are more profound. So, Jun Wu and his team at the Salk Institute in La Jolla, Calif., set out to test whether human stem cells injected into a pig embryo could create a viable embryo. It worked, although not perfectly. Only a tiny fraction of the cells in the chimera embryos were human. And they didn’t form into reliable patterns. Instead, they were scattered throughout the embryo. From Sharon Begley at STAT:

The attempts at human-pig chimeras failed more often than they succeeded. And even the successes carried very few human cells. “The overall human contribution was very low, with what we estimate is less than 1 human cell per 100,000 pig cells,” and no human cells in the chimeras’ brains, [Wu said].

The study also attempted to streamline chimera creation using more the traditional matchup of rats and mice. In those experiments, Wu showed that it was possible for a mouse-rat chimera to produce a specific organ or cell type by using CRISPR gene editing. They disabled genes in the rat fetus that are responsible for development and then injected the mouse stem cells. Although the technique wasn’t used in the human-pig chimera experiments, it showed that more focused organ-generating chimeras may be possible. That would significantly increase the chances of developing transplantable organs for patients.

The second chimera paper proved it was possible to cure diabetes in mice by growing pancreas cells from mouse stem cells in mouse-rat chimeras, and then transferring them into the diabetic mice. Because the stem cells came from the diabetic mouse, the procedure offered a workaround for the immunosuppression issues that accompany organ transplants. From Sarah Kaplan of the Washington Post:

Because the transplanted cells were grown from stem cells taken from mice, the animals required just five days of immunosuppressive drugs to keep their bodies from rejecting the new tissue. After that, they were able to live normally with healthy blood glucose levels for over a year — half a lifetime in human terms.

Further applications of both chimeric technologies could allow scientists to develop better animal models of human diseases. Most basic scientific research and pharmaceutical drug development is done on mice or rats that have been altered to simulate human diseases, such as diabetes. But the match is often not as close as scientists would like. That is an often-cited reason why many drugs never make it to market. Developing a mouse or pig that could grow human cell tissue would offer significant research advantages. There is even talk about chimeras that could grow tissue that would simulate that of newborn babies, which are never included in drug trials because of ethical considerations and who are affected by a very particular set of understudied health conditions.

But while these papers offer promise for the realm of transplants, they also bring a slew of ethical considerations related to the mingling of animal and human cells. From the Washington Post:

The technique is already the subject of a vigorous debate about the ethics of introducing human material into animals; since 2015, the National Institutes of Health has had a moratorium on funding for certain human-animal chimera research. (The new study was performed in California at the Salk Institute without federal funds.) Some argue that, since stem cells can become any kind of tissue, including parts of the nervous system, chimeras raise the specter of an animal with a human brain or reproductive organs. Others think there’s a symbolic or sacred line between human and animal genetic material that should not be crossed.

In the human-pig chimera experiment, some human neuronal progenitor cells that would become neurons where found in the embryos.  University of California at Davis stem cell scientist Paul Knoepfler, who was not involved in the study, commented on the ethical considerations in his blog:

Even with complementation (where for example a pig chimera would ideally only have human cells contributing to one organ such as a kidney or pancreas) one of the ethical dilemmas is that the chimeras would have to be taken to term in order to get a usable human pancreas. It is unclear if taking a human-animal chimera to term could be ethically permissible. In today’s paper, the team isolated the human-pig chimeras for analysis very early in development… Other ethical challenges include avoiding excessive (however one defines that) human cell contribution to chimeric brains and any human contribution to germ cells. Potential safeguards for the latter include never letting the animals be bred or always including a genetic change making them sterile or both. 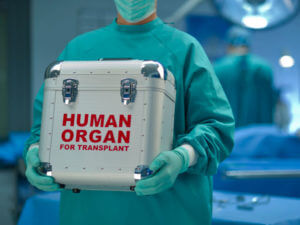 But chimeric animals are not the only technology being considered to fill the organ transplant gap. Another idea — one that is less controversial — gaining traction is bio-printing. It turns out human cells can be sprayed through 3D printers just as easily as other materials. Using this method, scientists have grown ears, noses and other tissue types. These have been implanted them into mice, where they assimilate into the circulatory system and continue to thrive. From the Economist:

The real prize of all this effort would be to be able to print entire organs. For kidneys, Roots Analysis, a medical-technology consultancy, reckons that should be possible in about six years’ time. Livers, which have a natural tendency to regenerate anyway, should also arrive reasonably soon. Hearts, with their complex internal geometries, will take longer. In all cases, though, printed organs would mean that those awaiting transplants have to wait neither for the altruism of another nor the death of a stranger to provide the means to save their own lives.

A version of this story originally appeared on the GLP on February 9, 2017.