Bangladesh’s pursuit of GM technology to expand food production and counteract the impact of climate change could serve as an inspiration for other developing nations grappling with the same issues.

Bangladesh is one of the poorest nations in the world with a per capita income of $1,400 in 2016, according to the International Monetary Fund. Most of its farmers are small landholders, who barely eke out a living. Yet it’s become a global innovator in developing GM technology. It has successfully grown insect resistant brinjal (eggplant) since 2013, and is close to rolling out a disease resistant potato, vitamin A-enhanced rice and insect resistant cotton, among other new crops.

The proliferation of GM crops in Bangladesh could have global significance by demonstrating to other poor nations the benefits of boosting crop production and farm income by increasing yields and reducing insecticide and herbicide costs.

The use of Bt brinjal, for example, could prod India into introducing the crop. India was the first country to develop Bt brinjal, and Bangladesh allowed its cultivation based on Indian bio-safety data. In response to domestic opposition, however, the Indian environmental minister imposed a moratorium on the commercialization of Bt brinjal, in 2010. Push back from anti-GMO forces has prevented its cultivation.  A 2016 editorial in the Indian Express noted:

It is ironical that Bangladesh’s farmers are today growing Bt brinjal that was originally developed in India and couldn’t be released here because of ideological opposition…It is time for our government…to strengthen its commitment towards advancement of agriculture through science and technology.  Indian farmers have equal right to scientific solutions that would help to enhance their crop productivity, incomes and livelihoods.

Neighboring Myanmar might also be prompted to become more open to biotechnology. That nation was once a major food producer before the economy languished under the former military government. Yields for many of its crops, including rice, groundnuts, pulses and sesame seeds, remain well below the levels in other major Asian nations, and below its historical potential.

According to the World Bank, “Myanmar’s unusually fertile soils and abundant water source are legendary in Southeast Asia. It is even said that Myanmar has the most favorable agricultural conditions in all of Asia. Almost anything can be grown in the country, from fruits to vegetables, from rice to pulses.”

Presently, the government maintains a cautious stance towards GMOs. After four years of field tests, commercialization of Bt cotton began in 2010. Myanmar is not a major producer of cotton, but about 88 percent of the cotton acreage is now Bt.  According to an International Service for the Acquisition of Agri-biotech Applications report on Myanmar:

Bt cotton growers are estimated to have increased cotton yield by 125%…from 2006/07 to 2012/13…The increase in income can be up to three times the income of competing crops such as beans, pulse, sugar cane and sesame, and can even be higher than the income from rice. Provisional estimates indicate that enhanced farm income from Bt cotton is $293 million for the period 2006 to 2013.

The government has also authorized the field testing of genetically modified groundnuts that can be grown in salty soil.

Many anti-GMO activists complain that GMO technology is dominated by a few agri-businesses, effectively creating a monopoly on the technology. They also argue the technology does not directly benefit consumers, but is instead dominated by large farmers in wealthy countries that grow soybeans, corn and cotton.  It’s a position undercut by Bangladesh’s application of GM technology. The cultivation of Bt brinjal is part of an international collaboration between the Alliance for Science Department of Cornell University and the Bangladesh Agricultural Research Institute (BARI), with no corporate involvement, and which directly benefits small, poor farmers, helping them boost meager incomes.  According to Cornell University:

…brinjal is a staple crop that is an important source of income and nutrition for farmers and consumers in South Asia.  Because of infestation by the fruit and shoot borer (FSB), as much as 70 percent of the eggplant crop in South Asia never makes it to market…Farmers in Asia spray hazardous insecticides as often as every other day to control FSB…Bt brinjal increases food security and reduces the use of insecticides that negatively affects human health and the environment….

The GM technology for Bt brinjal and for the other crops that are being field tested was developed by indigenous researchers and conducted by the BARI, an autonomous organization under the authority of the Ministry of Agriculture. It conducts research on all crops except rice, jute, sugarcane and tea for which there are separate institutes. 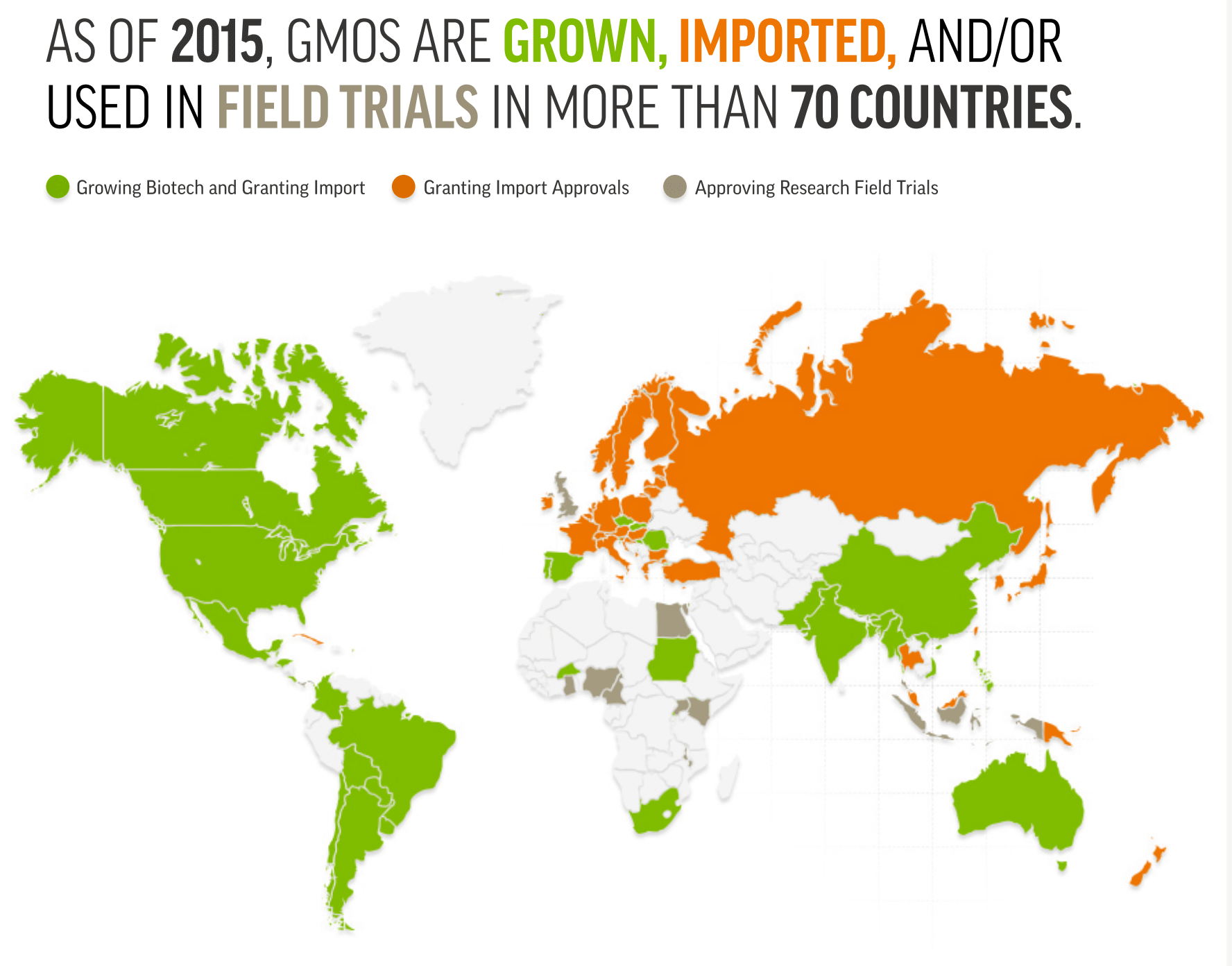 Perhaps the one application of agricultural biotechnology in Bangladesh that could have the most significant impact is the cultivation of vitamin-enhanced Golden Rice. For many GM researchers and scientists, the successful commercialization of Golden Rice is something akin to the Holy Grail. It could go a long way toward dispelling unwarranted doubts and fears about the safety of GMOs. Research on the rice began in the 1990s, but has proved devilishly difficult to perfect. Delays in bringing the rice to market have thrilled opponents, particularly Greenpeace, one of the most vocal objectors to Vitamin A rice as a means of dealing with Vitamin A Deficiency (VAD).  It has said:

GE Golden Rice is a proposed but not practically viable crop solution that has never been brought to market. The tens of millions of dollars invested in GE Golden Rice could have been better spent on practical and working VAD solutions, such as food supplements, food fortification and home gardening of natural foods rich in Vitamin A and other essential nutrients… It is irresponsible to impose GE Golden Rice on people if it is contrary to their religious beliefs, cultural heritage and sense of identity.

Greenpeace’s stance has drawn criticism from scientists, with 110 Nobel laureates writing an open letter criticizing the organization’s position on the use of GMOs:

We urge Greenpeace and its supporters to re-examine the experience of farmers and consumers worldwide with crops and foods improved through biotechnology, recognize the findings of authoritative scientific bodies and regulatory agencies, and abandon their campaign against GMOs in general and Golden Rice in particular.

After years of research, it appears that commercialization may begin in 2018. For supporters of GM technology, such a development would be an enormous victory. It would be an even greater victory though for those who will benefit from consuming Golden Rice. The World Health Organization has classified Vitamin A deficiency as a public health problem affecting about one-third of children from the age of 6 months to 59 months in 2013, with the highest rates in sub-Saharan Africa (48 per cent) and South Asia (44 percent).

The success of Vitamin A rice in Bangladesh could also offer encouragement for field trials underway in the Philippines. It will also give further impetus to researchers and scientists in Africa working on genetically modified Vitamin A-fortified bananas, sorghum and cassava.

Bangladesh’s successful application of GM technology could serve as a model. If it can develop its own GM crops, then so can other poor nations. It could open new avenues for these nations to feed their growing populations and reduce crop losses in the face of global warming.