Parents of school age-children are familiar with a new set of school warning signs. They’re at the classroom door at drop off, in the kids area of the local YMCA, even in a section of the local baseball stadium. Instead of ‘drug-free zones’ these areas are now ‘nut-free zones’ established because of a growing incidence of nut-allergies. These reactions can be so severe that one child’s peanut butter and jelly sandwich could send a classmate to the hospital… or worse.

Allergies occur when the body’s natural immunity is miscued to fight proteins that are not harmful. While our immune cells usually attack invading pathogens, sometimes they are compelled to attack neutral molecules we’re exposed to in food or the air. Pollen is another example. And once this attack has started, our immune system remembers the neutral protein as toxic, meaning the allergy never goes away.

Most parents find out about their child’s food allergies the hard way. They see an unexpected reaction in their child after she’s eaten a new food. Because of that the U.S. Academy of Pediatrics issues guidelines about when and how to introduce your child to new foods. Unfortunately there are no cures for these allergies. Parents and children must remain hyper-vigillant about what their child eats and potential environmental exposures at school or birthday parties.

But a study has opened the door to potentially identify these allergies early — at birth — and gives a potential direction for treatment. Yuxia Zhang and colleagues at the University of Melbourne examined the level of inflammation in blood taken from an infants umbilical cord at birth, then tracked those babies for a year to see who developed food allergies and who didn’t. They found that children who ultimately developed allergies already had abnormal immunity already at birth. Those children had high levels of monocytes and their monocytes were more eager to fight than those of children who didn’t develop allergies Mariss Afessenden at explained at Smithsonian:

Based on these tests, the team was able to pinpoint a type of immune cell called a monocyte, whose numbers were higher in the cord blood of kids who went on to develop food allergies. Monocytes transform into pathogen-fighting cells when they encounter an invader. In lab tests, the monocytes of children who developed allergies transformed more readily (were more eager to fight) than the monocytes from kids without allergies.

The study authors didn’t say what caused the increased activity for some kids. They could be genetically linked. Some food allergies are known to run in families. Environmental exposures during pregnancy might also be driving the heightened immune response writes Mitch Leslie at Science News:

What these results mean, Zhang suggests, is that the immune system of some children “at birth is already primed” to develop allergies. Why allergy-prone kids are born with overactive monocytes isn’t clear, Zhang says. A mother could be exposed to something during pregnancy, perhaps in her food, that alters the baby’s developing immune system. Genetic differences could also influence the sensitivity of monocytes. 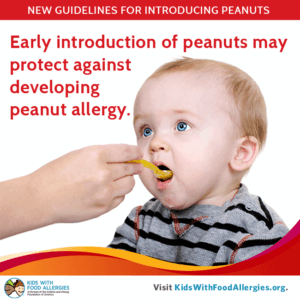 The environmental exposure theory is beset by controversy. There is little good evidence for the preventative or harmful effects of eating peanuts and peanut butter during pregnancy. While some studies have found that it might reduce the chances of having a child with allergies, others have found the opposite effect.

Identifying which kids might be more likely to develop allergies would be a great thing in and of itself. But the scientists suggested that early treatment with anti-inflammatory drugs might calm this over-active immunity could prevent allergies from developing all together. But that theory would need to be tested in animal models and undergo clinical trials before it becomes available.

Making these sorts of test widely available is also unlikely to be commonplace anytime soon. Looking for biochemical signatures of cancers using ‘liquid biopsy tests’ has been talked about for years. But companies looking to develop them have spent hundreds of millions of dollars trying to streamline a consumer product. These sophisticated allergy tests may suffer the same fate.