HIV fix: Can gene editing work alongside the virus to provide a cure?

David Warmflash | June 27, 2017
This article or excerpt is included in the GLP’s daily curated selection of ideologically diverse news, opinion and analysis of biotechnology innovation.

Gene therapy and management of human immunodeficiency virus (HIV) infection have eventful histories going back several decades. Both are saving lives today and both are innovating in ways that will lead soon to a convergence. In the years to come, gene therapy and other therapeutic genetic engineering modalities will be used against HIV. The conventional strategy for gene therapy is addition of new genes to a patient’s genome. But HIV requires new approaches — inspired by anti viral tricks from nature — if we hope to reduce the damage being done to third-world nations by the virus.

The current strategy in gene therapy is based on limiting, replacing or supplementing defective genes. This is a workable approach for recessive genetic diseases. However, right around the corner is the option of deleting genes, and subsequently line-item editing of genes that are too large to fit inside AAV, a virus that gene therapists commonly use as a carrier for genetic payloads. Both gene deletion and line-item editing of larger genes can be achieved using CRISPR genome editing carried inside an AAV. But ironically, the HIV itself could work better as a carrier for anti-HIV gene therapy. At the same time, modulating the immune response by suppressing gene activity without deleting the relevant gene is showing promise in laboratory studies. This approach utilizes a non-CRISPR genetic engineering tool, RNA interference (RNAi).

As gene therapy has evolved, scientists have anticipated its eventual use as an HIV treatment. But why consider gene therapy against an infectious disease? For inherited enzyme deficiencies like cystic fibrosis and Tay-Sachs disease, and for cancer, the potential for gene therapy seems fairly intuitive. But a well-known feature of infectious diseases is their ability to generate an immune response. When exposed to a foreign agent, our bodies launch a T-cell and antibody response. For the vast majority of diseases that impacted human mortality at the dawn of the 20th century, medical researchers were able to boost the immune response with vaccines. Polio, diphtheria, measles –all the major infectious killers that plagued our ancestors are prevented today. But a minority of microbial nemeses have evolved particularly devious tricks. Mycobacterium  tuberculosis is one of them; so is the Plasmodium parasite that causes malaria. They hide in human tissues, so vaccine development has been particularly challenging.

HIV has multiple ways to evade both the sensors and armaments of the human immune system. Once it enters human cells as a retrovirus, it normally embeds itself into the human genome through a reversal of the what’s called the genetic dogma. The latter refers to the passage of genetic information only in one direction, from DNA to RNA to proteins. In violation of the genetic dogma, an enzyme called reverse transcriptase enables HIV and other retroviruses to create DNA from RNA sequences that are carried in the viral genome. This makes removal of HIV analogous to the task of getting toothpaste back into the tube; theoretically, it’s possible, but snazzy techniques are required. 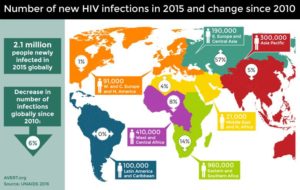 In gene therapy 1.0, only new genes can be added, so that cannot help with HIV. But the advent of CRISPR in 2012 has added the prospect of using gene therapy to delete genes, although one would still need an innovative tactic for identifying those sequences and weeding them out. RNAi is another genetic engineering modality, one that Caltech HIV researcher and Nobel laureate David Baltimore believes entails particular potential. The target for RNAi is messenger RNA (mRNA), the sub-type of RNA that carries the genetic sequence transcribed from a DNA gene. In RNAi, special molecules are slipped into cells to suppress activity of mRNA strands.

Related article:  Gene-edited animals could improve agricultural productivity. But could there be unintended consequences?

Research published recently in the online journal PLOS ONE implies a possible new strategy. The study suggests that a strain of HIV called HIV-1 works by hijacking species-specific adaptations that nature has evolved. This makes the virus infectious to some ape species, but not others. CRISPR-based gene therapy — we might call it gene therapy 2.0, or RNAi, potentially can incorporate the species-dependent mechanisms employed by HIV itself. This means either eliminating HIV from a patient’s genome, or rendering the virus neutral by blocking mRNA that is made from viral instructions.

The challenge is figuring out which genes should be targeted with this method. The answer could come from a minority of humans with a genetic deficiency that makes them resist HIV infection. To cause disease, HIV requires a certain protein on the surface of the immune system’s T-cells. People who cannot make that protein because the copy of the gene from both mother and father are defective are protected from HIV. Those who have one normal gene copy and one defective copy are partially protected. Thus, use of RNAi against the mRNA made from this gene should be protective as well.

These strategies can lead to a sea change in the fight against the HIV pandemic, particularly in developing countries. In developed countries, when diagnosed at an early stage, HIV is not a death sentence, but staying alive requires constant vigilance and treatment. Similar to diabetes, survival depends on monitoring a patient’s health, adjusting drug treatment accordingly, and managing complications aggressively. Gold standard treatment consists of drug combination therapy, which means using multiple classes of medications, each that attacks the virus through a different mechanism. 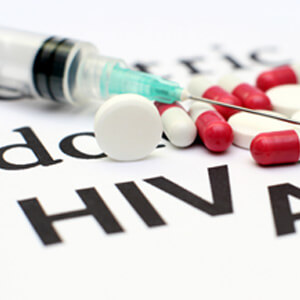 Physicians also have another drug class at their disposal, protease inhibitors, which interfere with another process that’s vital to HIV’s ability to reproduce itself. When patients are given both reverse transcriptase inhibitors (often more than one type) plus protease inhibitors, survival can continue for many years, and improves still more when an additional class of drugs is added. This is the current paradigm, but, like diabetes therapy, it keeps patients alive without curing them.

Combination therapy is extremely expensive and requires excellent patient compliance, and also societal support. All of these factors make it particularly challenging in developing countries, where HIV infection therefore has a much worse prognosis than it has here in North America, or in Europe.

The prospect of a high-tech approach like gene therapy solving a major public health issue like HIV may sound far-fetched. After all, high-tech solutions generally take hold in developed countries first. The same pattern is likely with HIV. Developed, rich countries will have the treatment first. But if it does work and eliminates the virus, it won’t require the kind of followup and constant vigilance that’s central to standard combination drug therapy.