Have the BRCA mutation? Debating a precautionary mastectomy? Your genes may provide a guide

Actress Angelina Jolie captured headlines in 2013 when she announced her decision to undergo a double mastectomy to reduce her risk of developing breast cancer. It was her answer to the revelation that she carried the well-known BRCA1 mutation that significantly increases the risk of breast and ovarian cancer

The bold move has served as inspiration for other women who find themselves facing the increased risks associated with BRCA1 and BRCA2 mutations. But for women considering the procedure, a new study offers a more detailed look at risk factors that could influence the timing of the surgery. 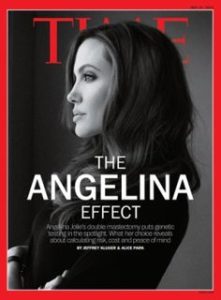 This could be critical for women who decide the risk may be low enough at younger ages to delay surgery. That may be particularly true for women under the age of 30, where the risk of developing breast cancer is 4 percent, according to the study. Risk increased to 24 percent by age 40 and 43 percent by age 50 in women with BRCA1 mutations. A similar trend with slightly lower numbers was observed for women with BRCA2 mutations.

“This gives women more guidance as to when it’s safe and when it’s time to go ahead and do the surgery,” said co-author Mary Daly, founder and director of Fox Chase Cancer Center’s Risk Assessment in Philadelphia.

Related article:  'Why did I get cancer?' We can do more to alleviate 'angst, guilt' accompanying a diagnosis

Knowing when BRCA1 and 2 mutations pose the greatest risk for developing cancer can be especially useful for women considering a preventive mastectomy, which can reduce the risk of developing breast cancer by 90 percent. Younger women who want to have children and breastfeed may want to delay this permanent procedure until after their childbearing years — if they can be reasonably assured that the risk of breast cancer is low. In an international study of over 1300 women with mutations in BRCA1 and 2, almost 20 percent of women chose to undergo a double mastectomy – before developing any signs of cancer.

While a preventive mastectomy can have positive consequences on a woman’s well-being, it can also create negative body image issues and carries the risk of infection and complications that any surgery brings.

The study is more accurate than previous reports for two reasons. First, the study recruited a large number of subjects – almost 10,000 women with BRCA1 or BRCA2 mutations. Second, the study was done prospectively, meaning that the women had no signs of cancer when the study started. Previous studies have been retrospective — they looked at women who had already developed cancer and estimated risks based on how common breast cancer was in their families. This type of analysis can be prone to bias.

This study gives doctors more personalized information regarding a patient’s risk of developing cancer. Instead of using a broad range, such as 40 percent to 90 percent, doctors may be able to look at several characteristics specific to a given patient, such as a patient’s mutation pattern and age to give a more accurate estimate of that patient’s risk.