When Scott Hamilton Kennedy visited Uganda to shoot part of his new Food Evolution movie, he wanted to see the real impact of banana bacterial wilt on ordinary farmers. Kennedy and his crew visited Frances Nanziri, a small holder banana farmer in a remote Ugandan village who was struggling with the devastating disease. Nanziri is featured in the film sharing her frustrations in battling the disease and her desire for a real solution. It’s a direct rebuke of anti-GMO activists who claim that the banana bacterial wilt is no longer a problem, and that Kennedy hyped the concern for propaganda reasons.

Recently, two years after the filming, I visited Nanziri to find out how she was faring, and if the claim that the disease was no longer an issue was true. What did I find?

How has Nanziri’s livelihood evolved?

Some responses by GMO critics to the Food Evolution film suggest Nanziri should be eating banana cake made from healthy banana plants. That’s not happening. In fact, without a GMO solution to the deadly disease, Nanziri will be having no healthy bananas left in her field that she once held so dear.

Nanziri’s late father, contrary to most African cultures, had allocated a portion of his land to be shared by Nanziri and her two sisters. Her sisters entrusted the land to Nanziri so she could farm bananas, to make a living and share in the returns. But this was not to be as banana bacterial wilt overwhelmed her farm to the point that when I visited, the once well-cared for field was full of weeds and wilted bunches.

When Nanziri’s siblings returned to assess her progress, Nanziri had nothing to share — the banana harvest was a disaster. Her siblings now want to sell off their portion of the land and invest in what they consider a more reliable enterprise. If this happens, this would leave Nanziri with only one acre, which she thinks will not sustain her. She is now leaning towards abandoning her dream and selling off her portion as well, and moving to another place where she can purchase land cheaply so she can continue with her passion of growing bananas. Nanziri also fears she will lose treasured relationships with her friends when she shifts to another village. 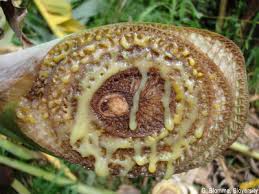 Banana wilt can be managed, but the cost of doing so is far beyond smallholder farmers who represent the majority of farmers in much of Africa. The film also focuses on another farmer, Emma Naluyima, who manages her banana plantation and trains her community to do the same. Naluyima is a veterinarian with business training representing a minority who can keep their farms wilt free. She has tool racks, disinfectants and the discipline that her science background offers her.

Related article:  Viewpoint: Why a Thanksgiving dinner using GMO ingredients is safer and healthier than an organic meal

Nanziri, on the other hand, belongs to a greater number of Ugandans, who make less than a dollar a day surviving entirely on farm produce. Asking her to manage the disease in the same way Naluyima manages hers would be unrealistic. Kennedy understood this and offered to take her to a public research center where resistant transgenic varieties are bred. The sight of healthy plants as seen in the film brought a smile to the normally frustrated look on Nanziri’s face.

For the wilt to be successfully managed, a farmer has to begin with clean planting material that goes for $1 each plant, buy a sterilizer, uproot and burn the diseased plants and remain mindful of the return on investment. When I visited Nanziri, it was clear that she could not afford these extra costs. Her bananas were still wilting and the plantation looked abandoned — not like two years before, when Kennedy had visited, and found a well tended plantation fighting the wilt challenges.

What is the real problem?

To Nanziri, her sisters who want to sell off their portion because it is no longer profitable are a serious hurdle hindering her ability to pursue her passion and livelihood. But there is an even bigger problem — anti-GMO activists in the major world cities where Food Evolution is showing, and European governments. Food Evolution captured real problems experienced by real people who need real solutions — the global forces denying millions of small holder farmers like Nanziri access to improved genetically engineered varieties may be ignorant to the fact that African smallholder farmers grow their own food crops and have no capacity to import food from other continents when their crops fail.

Isaac Ongu is an agriculturist, science writer and an advocate for science based interventions in solving agricultural challenges in Africa. Follow him on Twitter @onguisaac.