Orthorexia nervosa: Do anti-GMO activists have this ‘eating disorder’?

The idea that strict devotion to “eating pure” can be a feature of mental illness, or even a specific psychiatric diagnosis, has made the news several times. Coined by Steve Bratman in 1997, the term “orthorexia nervosa” (ON) refers to a preoccupation with eating foods perceived to be healthy, and avoiding foods perceived to be unhealthy, to a psychopathological extreme.

Today, the term orthorexia is recognized by mental health professionals but there is continuous debate within the American Psychiatric Association on whether to add ON to the Diagnostic and Statistical Manual of Mental Disorders (DSM), the comprehensive guideline used for making and classifying psychiatric diagnoses. The current DSM, the 5th Edition, incorporates significant changes in the eating disorder section, including the addition of a new diagnosis called binge eating disorder, but it’s too early to guess whether the DSM-6 will make ON part of the diagnostic mix.

The GLP has discussed this condition previously in an analysis by Ben Locwin here.

While the fate of ON hangs in the balance, one thing is clear: the discussions about it are causing symptoms of anxiety among the elites of perceived healthy eating, those who promote exclusive purchase and consumption of foods lacking “chemicals,” gluten, or even a molecule derived from plants produced via transgenic technologies, gene editing, or intervention with post-translational processes (commonly referred to as GMOs). This suggests that whatever the eventual outcome of the ON diagnosis, at least some fraction of natural food advocates, may have at least one trait that generally is not considered to be in-line with perfect mental health.

In psychiatry and clinical psychology that trait is called splitting.

Jumping to conclusions: Nuances of the orthorexia discussion are tossed into the gutter

One example of the thinking of some natural food advocates comes from the online magazine Natural Society, which last February reported on various discussions concerning ON in an article titled: “Officials Declare “Eating Healthy’ a Mental Disorder“.

The author did not say who those officials were, but this is is how he summed up ON:

In short, if you turn your back on low quality, corporate food containing known cancer causing toxic additives and a rich history of dishonesty rooted in a continuous “profits over people” modus operandi, then you may suffer from a mental illness. The cherry on top is that if you have the pseudo-science labeled disorder of orthorexia nervosa, you will be prescribed known toxic, pharmaceutical drugs from some of the same conglomerate corporations that you are trying to avoid by eating healthy in the first place. 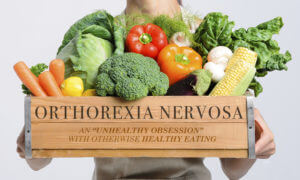 Forget that discussions by natural food advocates regarding toxicity and carcinogenicity of various additives are typically wonderful examples of pseudoscience, since they tend to be ignorant of the concept of study, reproducibility, the importance of the concentration (dose) of a substance, and a host of other concepts. Forget that they have their own cherry on top, in that to appear scientific to their readers, they cherry-pick studies, (often older or discredited) and ignore studies that support conclusions opposite to their own.

Instead, let’s just focus on the author’s perception of the ON issue. The reality is that psychiatrists and psychologists are still reviewing the evidence to determine if ON is a class of eating disorder. ON was not included in the DSM-5 — the “Natural Society” author even admitted this in his article — and here’s the reason why:

There was not enough evidence for it at the time that the DSM-5 was put together — something the author of the Natural Society article neglected to mention.

The number of published studies at that time was small and data were few; in short, the American Psychiatric Association did not want to jump to conclusions. They wanted to wait and see how the science progresses over the years and will revisit the issue later. That’s being scientific. In contrast, pseudoscience does the opposite, jumping to conclusions with no sound rationale or evidence.

The website “Natural News” also has covered the topic of ON. After going back and forth from a more objective stance of maybe ON is a disease, or maybe not, the author, then summarized it like this:

We could boil down [the message from a 2013 study associating orthorexia with impaired executive functioning based on self-reporting] as follows: Hey, we’re busy profiteering by infecting the planet and the food supply with chemicals. If you insist on avoiding our noxious faire, then you’re a mental case. Your brain has gone haywire and you should seek professional help from one of our mental health representatives. When you arrive, you will be diagnosed mentally ill, of course. But don’t worry, we have pills for that. We’ve got you covered! Soon, your brain will be corrected and you’ll have no problem eating our crap.

So much for the attempt at objectivity in the rest of the article. Essentially, the perspective of the second author is the same as that of the first. It’s all or nothing. “They” (the drug companies and scientists studying ON, all working together) are wrong to label a trait as abnormal, even if the trait leads someone to avoid a chemical agent at concentrations that cannot possibly have a negative health effect. Soybean oil is a good an example. Why do anti-GMO people want to avoid it? Genetic modification changes gene products, meaning the soy protein. It has nothing to do with the lipid component of the soy plant, so the oil from GM soy is identical to the oil from conventionally grown. In other words,

Related article:  Did Cargill ruin its reputation with scientists, farmers with one #NonGMO tweet?

Splitting and what it means in psychiatry

In psychopathology, the term splitting refers to an inability by certain patients to appreciate a middle ground between two extremes.It’s a feature typical of what are called “Cluster B” personality disorders, characterized by the patient being extremely dramatic about people and events in their lives, but it also shows up in people with a variety of other conditions, including mood disorders and psychosis. Examples of splitting include: “Person X is horrible”, “Person X hates me”, “Person Y is wonderful”, “Person Y loves me.”  The number of possible manifestations is endless and, as you can see, the term can be applied appropriately not just to psychopathology, but even to politically relevant beliefs about entire societies.

And it can apply to how groups of fanatics perceive nuanced discussions of scientists and health professionals. In the case of ON, while some mental health professionals are using it informally, it is not accepted universally as a diagnosis. Yet, because many psychiatrists have suggested that maybe it should be a diagnosis, advocates of “pure eating” somehow have taken this to mean that “officials have declared “eating healthy” as a mental disorder”. For such fanatics, there really is no middle ground, no tolerance for a few years or decades of uncertainty, debate, and reclassification, but rather one position or its opposite. Be against GMOs completely, or you’re part of the corporate conspiracy.

Where the orthorexia splitters really missed the boat

Whether it’s a personality disorder, or a more well-known condition such as a mood disorder (like major depression), or an anxiety disorder, two important concepts pervade the DSM. For one thing, to qualify for a particular diagnosis, a patient must meet a specified number of diagnostic criteria. In major depression, for example, the patient needs at least five out of nine possible symptoms. Even more importantly, to be diagnosed, the abnormal symptoms experienced and displayed by a patient must be having a negative impact on the patient’s life. It must affect their ability to function, either in school or work, or their family life, or interpersonal relations. Thus, while a person can have features of an anxiety or mood disorder, or features of a personality disorder, just having a few features is not enough to be diagnosed as mentally ill. 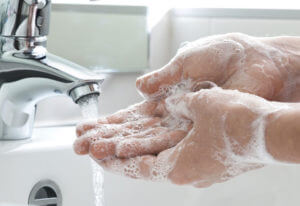 How does this play out clinically? In the case of obsessions and compulsions, there are many people with thoughts that keep intruding over and over. They may wash their hands, or perform other acts, an abnormally high number of times per day. Such people could be said to have features of obsessive compulsive disorder (OCD), but they cannot be diagnosed with OCD unless having those features causes them distress. Typically, in OCD for example, a person washes their hands or performs other tasks in an attempt overcome feelings of anxiety connected with intrusive thoughts. But rather than feeling better after washing their hands, they feel just as anxious, plus they don’t like their compulsions, yet they keep doing it anyway to the point that it interferes with their occupational and social performance.

Similarly, with the proposed ON eating disorder, simply being an extremist in avoiding  GMOs or other classes of foods perceived to be unhealthy would not be enough. Instead, as with the other conditions, it’s the full clinical picture that matters when it comes to ON. Is the person constantly focused on avoiding GMOs to the point that it’s mostly what he or she thinks about? Do they become anxious after consuming something that might have a molecule of Bt corn. Is it interfering with their job? For instance, did they refuse to eat at a business lunch because the restaurant lacked a seal from the Non-GMO Project, the anti-GMO equivalent of “hechsher” seal of rabbinic approval used to label kosher foods?

There aren’t any data on this yet but it seems reasonable to suspect that most people who shop at Whole Foods Market, or any other temples of culinary pseudoscience, are not obsessed with eating organic and avoiding GM foods to the point that they would be classified as having ON. Instead, it’s more likely that the majority of such shoppers are simply misinformed. Misinformed by all of the propaganda circulated by the anti-GMO interest groups. Misinformed by the so-called “health food industry” — Big Organic, if you will — to think that food products sold there are actually healthier than foods sold in conventional markets. Most of society has no grounding in scientific thinking, and most people are easily misled, and can’t tell the difference between the quacks and people who really know.

But in the rare cases when the goal of “eating pure” does completely dominate a person’s life, the way that major depression, OCD, AN, and a host of other conditions dominate, that’s when it’s time to recognize the traits as indicative of psychopathology. That’s when they need treatment.  And no, despite accusations by the author in the Natural Society article, pharmaceuticals are not likely to play a major role in treatment for ON. Rather psychotherapy is more likely to be the strategy, cognitive behavioral therapy in particular, which seeks to change thought patterns that are built on multiple layers of incorrect assumptions and fallacies. Just like the anti-GMO movement.