Ricki Lewis | September 26, 2017
This article or excerpt is included in the GLP’s daily curated selection of ideologically diverse news, opinion and analysis of biotechnology innovation.

The intense nausea that follows drinking alcohol for people with a certain gene variant may become the basis for a gene therapy to prevent alcohol use disorder, the new medicalized term for alcoholism. It would work much like the drug Antabuse, used for more than half a century, but on a less fleeting basis.

But if that second enzyme isn’t working well, acetaldehyde builds up, and nausea ensues. Because throwing up is so unpleasant, individuals who tend to upchuck after drinking avoid alcohol.

More than a third of people of East Asian ancestry (Japanese, Chinese, and Koreans) are likely to get sick after drinking, thanks to a variant of the ALDH2 gene that disables the enzyme. The reaction to the building acetaldehyde is swift: red face, nausea, vomiting, racing heart, dizziness, weakness, headache and anxiety. Known in those countries as the Asian flush reaction, the wretched response is also associated with increased risk of esophageal cancer. 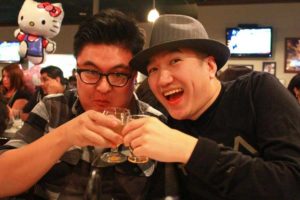 About 540 million people worldwide have the alcohol flushing reaction – about 8 percent of the population. And people who have it know it – no fancy diagnostics necessary.

Jude Samulski at the University of North Carolina Gene Therapy Center and Anamaria Sanchez of the University of Chile and their colleagues deleted a bit of the ALDH2 gene that encodes a small hairpin (sh) RNA – a short segment that loops out and can be snipped off with an enzyme, like cutting out a loop that forms in tangled thread when sewing a hem. Removing the hairpin blocks production of the ALDH2 enzyme, and the barfogenic acetaldehyde mounts, more so with more drinks. The work is available online and will be published in an October issue of Human Gene Therapy.

The researchers delivered the doctored dysfunctional ALDH2 genes in a standard gene therapy viral vector, AAV2, into human embryonic kidney (HEK-293) cells and into human liver cancer (HepG2) cells, inspired by other investigators who had shown that similar strategies elevate acetaldehyde in rats. Sure enough, a few days later, when alcohol is dumped on the human cells, acetaldehyde levels jump, from 30 to 50 percent, depending upon the alcohol dose.

Gene therapy, the investigators conclude, could be a “useful tool for the treatment of alcoholism.” But so far it’s just in disembodied cells.

It isn’t clear where the gene therapy might be delivered – viruses have “tropisms,” or favored body parts, and AAV2 beelines for cells in the eye, the kidney, and the central nervous system. The viruses hover outside cell nuclei as circles called episomes, rather than joining our chromosomes, and as a result can be diluted away as cells divide. But nerve cells don’t divide, and in fact AAV2 has been delivered intravenously in several gene therapy trials for inherited brain diseases.

Meanwhile, other genetic approaches have shown limitations. Gene silencing using nucleotides similar to those in DNA would have to be delivered continuously, which might not be safe. Long antisense molecules have the dreaded off-target effects. And an antibody meant to act like an anti-cocaine vaccine, also delivered in AAV, had effects in mice. Until the new study, gene therapy to counter an addiction hasn’t been tried in anything human.

New kid on the block

A gene therapy approach to preventing the drinking of alcohol because of an aversion to hurling most closely resembles the mechanism of the drug Antabuse (disulfiram), available since 1951 as a daily pill taken typically for weeks or months. (I had one monumental event following drinking in college and can attest that it’s possible not to wish to repeat the experience of the aftermath ever.) Taking Antabuse and then drinking recapitulates the Asian flush response.

Other drugs to squelch alcohol use disorder work in different ways. The monthly injection naltrexone (Vivitrol and Revia), approved by the FDA in 2006, blocks endorphin receptors and thereby reduces craving. But it doesn’t induce vomiting. And Acamprosate (Campral), a thrice-daily pill, is vaguely described as “neuromodulatory.”

A new entrant may be an anti-inflammatory drug used in Japan to treat asthma, Ibudilast. In a new study, 24 participants who reported drinking daily for at least three weeks each month were given either the drug at increasing dosage for six days, then waited two  weeks, then had placebo for six  days, or they had the placebo first and the drug last. On the sixth day, participants got an intravenous dose of alcohol. After the regimen, they described how they felt. The drug reportedly lowered craving, but the numbers and timeframes seemed on the short side to me. FDA is fast-tracking study of the drug to treat progressive MS.

Meanwhile, a quick look at ClinicalTrials.gov lists 283 treatments in the works for alcohol use disorder: a few old drugs like Depakote, a few familiar approaches like antioxidants and deep brain stimulation. But most listings are behavioral, including a bunch of phone apps and the obvious and futile, like counseling college freshmen not to drink. 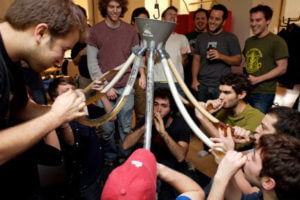 One can imagine a shot of the gene therapy being given at orientation to prevent binge-drinking. I mention this because in the summer of 2010, an unbelievably boneheaded program, Bring Your Genes to Cal, at the University of California, Berkeley, attempted to encourage incoming freshmen to take a handful of genetic tests, including one for ALDH2. Lacking the gene variant might have encouraged drinking. Fortunately it never got off the ground.

Gene therapy to keep people from drinking is not very high on my list of conditions that DNA delivery might combat.

But Terence R. Flotte, of the University of Massachusetts Medical School, writes in an editorial accompanying the article in Human Gene Therapy that the “initial proof-of-concept for a gene therapy prevention or treatment of alcoholism … could conceivably reproduce the biological basis for resistance to alcoholism seen in those harboring the less functional ALDH2 allele. Perhaps such an approach might be the key to using the immense power of gene therapy to stem the rising tide of alcohol-related substance use disorder morbidity and mortality in the United States.”

Can anyone suggest a drug name?