Tale of two brains: One from normal child, another from abused child show impact of neglect

The primary cause of the extraordinary difference between the brains of these two three-year-old children [pictured below] is the way they were treated by their mothers. The child with the much more fully developed brain was cherished by its mother, who was constantly and fully responsive to her baby.

The child with the shrivelled brain was neglected and abused. That difference in treatment explains why one child’s brain develops fully, and the other’s does not.

The damage caused by neglect and other forms of abuse comes by degrees: the more severe the neglect, the greater the damage. Eighty per cent of brain cells that a person will ever have are manufactured during the first two years after birth. If the process of building brain cells and connections between them goes wrong, the deficits are permanent.

This discovery has enormous implications for social policy. It explains two very persistent features of our society. One is the way that chronic disadvantage reproduces itself across generations of the same families. There is a cycle of deprivation – lack of educational attainment, persistent unemployment, poverty, addiction, crime – which, once a family is in it, has proved almost impossible to break. 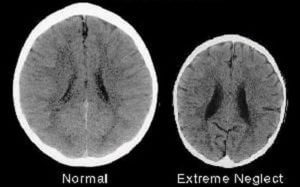 The GLP aggregated and excerpted this blog/article to reflect the diversity of news, opinion, and analysis. Read full, original post: These two brains both belong to three-year-olds, so why is one so much bigger?