Identical twins have been a source of mystery and fascination for many years. It’s easy to understand why: Two people born at the same time who look and act alike can conjure up all sorts of wild stories. In some cultures, twins have almost a mystical status.

Most people assume identical twins are basically clones of each other — carbon copies made by nature. That’s not quite the case. While they’re more alike than almost any pairs of people out there, there’s still a great deal of difference between them. This seems unbelievable to most of us. After all, we’ve all heard stories about separated identical twins who are alike down to the way they hold a glass and seem to have been made exactly alike from the beginning of their lives.

Twins are a valuable source of study for the genetic world even to this day. But they’ve also revealed that the genetic makeup of a person is even more complicated than Mendel could have dreamed of with his peas. While twins have been studied as long as they’ve existed, they’re still revealing more things about genetics to this day. Let’s look at some of them. 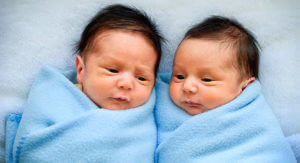 First, let’s consider that twins come in two types – identical and fraternal. Fraternal twins also are called dizygotic, coming from two separate eggs. Identical twins are also called monozygotic, coming from one egg that splits in two. Other types of twins, like “half-identical twins” (when an egg splits before conception and the halves are fertilized by different sperm) have been speculated to exist, but haven’t been proven yet.

Fraternal twins are no more similar than any other pair of siblings —  at best they will show fifty percent genetic similarity. Identical twins, by contrast, share a large portion of genes. Anything that is fixed at conception will be the same in all monozygotic twins.  (There is one exception: sexual phenotypes.  Due to a rare extra chromosome in the egg or the loss of chromosome after the split, there are a few examples of monozygotic twins of opposite sexes.  In some cases one twin will be male, the other a female with the single X condition Turner’s syndrome. In other cases the fertilized egg has an extra X chromosome, making it XXY, that goes to make a XX girl and XY boy)  They will have the same hair color, eye color and blood type.  They will always be the best match for each other in organ transplants. When grown, their height will be similar and they often share personality traits.

Monozygotic is used in medicine more often than “identical” because it’s more accurate. When 66 pairs of identical twins were analyzed for single nucleotide polymorphisms, two differences were found in the 33 million present. That’s not a lot, but it means identical twins are not merely clones.

So why will one twin get autism and one not? The answer lies in epigenetics.

Epigenetics is the study of the level of activity of genes. A genome can be turned off or on at different times of life. In some cases the environment will turn on a genome while a different one would allow it to remain inert. Environment does not always mean “parental influence,” despite its representation in popular culture. It’s a broad term referring to anything that influences an organism, from embryo to fetus to infant and beyond. Once the egg splits, the monozygotic twins will have their own environment. Most will share a placenta but have separate amniotic sacs. Even sharing a placenta can cause environmental differences: one twin may get more nourishment through the placenta, and conditions like Twin to Twin Transfusion Syndrome (TTTS) can result in drastically different environments while still sharing the womb.

Genetic development doesn’t stop after birth and is influenced by the post-uterine environment as well. Studies of monozygotic twins raised apart after birth show the greatest amount of epigenetic variation, but even in twins raised together the differences exist and increase with age. Three-year-old twins show less variation than twins of 70. That’s a clear indication that the environment around the twin is still shaping their genetic makeup long after birth. Studies of identical twins that differ in birth weight show more variance in brain structure and epigenetic difference than the ones with similar weights, indicating that the prenatal environment has a significant effect on genes. This genetic variance even extends to stem cells — induced pluripotent stem cells taken from identical twins will still show significant differences. Those differences are usually near methylation sites, indicating some difference in environment is responsible for them.

What do some of the most recent twin studies show about these differences? Let’s take a look at one of the most unusual twin studies in progress now – the Kelly twins. Astronaut Scott Kelly was sent into space for a year. His twin brother Mark has spent 54 days in space in the past. Two astronauts, with nearly identical genes (as close as a person can get) but a drastically different environment – it’s almost tailor-made for a study. The study is actually several studies rolled into one. The tests are not all related to genetics, but the ones that are study the effect of space on the genetic component of aging, a whole epigenetic genome profile before and after the trip, and a study on DNA and RNA methylation before, during, and after space travel.  The results of the tests are still being analyzed, but initial testing showed that after Scott’s extended trip in space, they each had 200,000 different RNA molecules among them.  Scott’s telomeres (the ends of chromosomes that prevent them from deterioration and fusing with other chromosomes) increased in length while he was in space.  Some of the changes to Scott’s DNA from space travel seem to have reversed themselves, like the telomeres.  Whether others will is unknown. The full data from the study will be released in 2018.

Annie Keller is a freelance medical writer in Columbus, Ohio.