Rebecca Nesbit | November 13, 2017
This article or excerpt is included in the GLP’s daily curated selection of ideologically diverse news, opinion and analysis of biotechnology innovation.

Diminishing global fish stocks are a serious concern for the environment and food security, yet our fish consumption keeps growing. Producing fish oil on land could reduce the tremendous pressure the fishing industry puts on the oceans, and this is a step closer thanks to recent research on a transgenic oilseed crop.

A team at Rothamsted Research in the UK, led by Professor Johnathan Napier, has spent nearly two decades working to meet the needs of the fish farming industry using plants. Field trials look promising, with the ultimate aim of maximizing health benefits of fish while improving the sustainability of aquaculture.

The health effects of oily fish are well known, and these come partly from long-chain omega-3 polyunsaturated fatty acids (LC-PUFAs), which help prevent heart disease and stroke, and may offer mental health benefits. Yet we are hard-pressed to meet a growing demand for fish without wreaking havoc on global fish stocks and threatening the health of our oceans. If the world’s population is going to access the health benefits of fish, we need another way to produce fish oils.

Although over half the fish we consume comes from farms, aquaculture doesn’t solve the problem of overfishing. Much of the fish caught in the wild becomes fish food, and so fish farms are reliant on exploitation of natural resources. The global aquaculture industry has continued to expand, driven by our demand for omega-3 fish oils and by the growing human population. Aquaculture now uses around 80 percent of the fish oil harvested annually from the sea, and more fish goes into the aquaculture system than comes out. 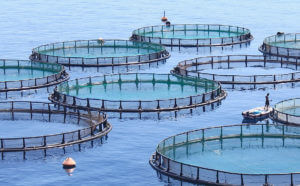 Replacing wild fish as a source of fish food is challenging because “fish oils” aren’t actually produced by fish. The oils are in fact made by microbes at the base of the marine food web. And those aren’t available to caged fish in farms. We don’t currently have the technology to produce algae on a large scale. So farmed fish are fed oil and meal made from fish caught in the wild, where omega-3 fatty acids work their way into the food chain.

It’s possible to raise fish with vegetable oil in their diets, so fish farms are turning to vegetable oil as a source of food. However, this changes the nutritional value of the farmed fish. There is emerging evidence that farmed fish now contain significantly less of the beneficial fatty acids than they did 10 years ago.

Transgenic camelina as a source of fish oil

In the search for a more sustainable source of fish oil, the team at Rothamsted used genetic modification to produce “fish oils” in plants.

The project uses camelina, a distant relative of oilseed rape and one of Europe’s oldest oilseed crops. Camelina is naturally high in omega-3, but these are the short-chain fatty acids and not the long-chain omega-3 fatty acids which bring health benefits. To change the profile of oils, the team introduced synthetic genes into the camelina, similar to those found in algae. The transgenic plants contain the biochemical pathway which produces long-chain omega-3. This oil can then be extracted from the seed and fed to fish in a pure form, as a more sustainable alternative to fish oil sourced from the sea.

Related article:  Could 2018 mark the end of the anti-GMO movement?

The advantage of GM camelina go beyond sustainability. It also sidesteps some of the other issues associated with fish oils sourced from the oceans, including contamination with heavy metals. 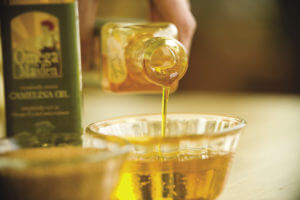 The project had already had success in the laboratory, where the team demonstrated that their camelina plants produce long-chain omega-3 oils in their seeds. The next step was small outdoor trials to see whether the same is true in the field. Results from the trials were announced in a new paper  and show positive findings from 2014 and 2015. The transgenic plants grew well in the field, and accumulated oil in their seeds in the same way they did in the greenhouse.

Compared to plants used in previous experiments, the latest variety produces oil which is closer to natural fish oil. The new plants have lower levels of omega-6 fatty acids, which are only found in low levels in marine organisms, as well as more of the beneficial omega-3 fatty acids.

A second 2017 paper reported positive results from salmon feeding trials. For 12 weeks, the salmon were fed diets containing oil from GM camelina grown in the greenhouse. At the end of the study these fish were as healthy as salmon fed on a standard mix of rapeseed and fish oil.

The most exciting result from the fish feeding trial was the potential impact on human health. The fish fed camelina oil accumulated fatty acids exactly as they would when fed fish oil – twice as much omega-3 as fish fed on the commercial mix of fish and vegetable oils.

The next step for the GM camelina project is to select the best plant lines currently being grown, to ensure the highest levels of omega-3 fish oils are produced. These plants will be used in larger field trials.

The project will then need to transition from the research phase to development and commercialization. This will involve planning how to make the crop available on a commercial scale, and determining which farm management practices are needed to prevent gene flow to other plants.

The final step will be to secure regulatory approval, although the status of the EU regulatory system means that the team will only be seeking approvals outside Europe.

Ultimately, if the GM camelina is accepted by regulators and users, the team’s vision is to see the volume of fish oils harvested from the sea matched by the amount produced on land.

Rebecca Nesbit is the author of Is that Fish in your Tomato? a popular science book covering the fact and fiction of genetically modified food. You can follow her on Twitter as @RebeccaNesbit.