I was dead tired. I was trying to work as hard as I could to keep warm as I shoveled trash in a landfill in near freezing temperature. A worker had taken pity on me and lent me his jacket as I was tragically under-dressed during an uncharacteristically cold spell in January in Texas. The window cleaner I had used in a different job had frozen to the windows of the office building I was cleaning the previous day. I was unemployed and trying to prove my worth to a labor agency. I felt as disposable as the trash I was shoveling.

During our lunch break, I only drank the coffee provided onsite instead of eating. I only had $10 to my name until the labor center cut the check for the job I working. One of the other laborers convinced me to go to the food stamp office the next time the labor center had no available jobs.

I received a little over $140 a month to help cover food expenses. Like 6.3 million other Texans, I had no health insurance. I tried to make do as best I could and spend my money wisely as possible. I tried to shop at the “outside” perimeter of the grocery store ( fresh produce and bread) and buying dried grains and beans in bulk when I could. To fit both my SNAP and “time” budget, a strategy of mine was to make stews and soups in a crockpot. I spent a lot of time poring over the weekly circulars to find deals as well as stopping by the food bank occasionally when I could get to it. Considering organic food is more expensive, it may seem surprising that I tried to buy organic produce and foods. 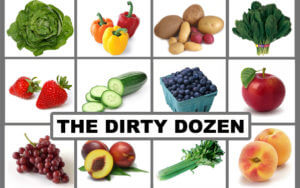 “It’s expensive, but think of organic produce as health insurance,” was the sentiment I received from my hippie mother and other people I respected. It seemed everywhere I turned, the message was clear — organic was healthier, cleaner and more nutritious.This frame of mind was and is particularly insidious on the internet. Comics, bloggers, and infographics cast scientists as villains with deadly “toxins”, “chemicals”, and “GMOs”, while organic farmers were superheroes. On the internet, organic bloggers pass themselves off as having as much insight as doctors. Organic produce was the medicine that will heal, “cleanse”, and prevent illness. I couldn’t afford to go to the doctor, so I better eat organic produce lest I succumb to the harmful toxins in conventional products. If I couldn’t buy totally organic I could at least avoid the foods on the scare-inducing “dirty dozen” list put out by the Environmental Working Group.

The organic food movement is often linked to the social justice movement. I cannot help but think there is a moral failing in promoting an organic diet when conventional food and GMOs are just as healthy and safe as organic food but cost way less. There is even a case to be made that GMOs offer ecological benefits by producing a higher yield with less resources. I could have stretched my meager benefits a lot farther had I not given into anti-GMO fear. Scare campaigns perpetuated by organic companies and bloggers hurt poor folks like myself.

A study focusing on the purchasing behavior of low-income shoppers, published in Nutrition Today found that when vegetables were labeled as grown with pesticides “shifted participants toward “less likely” to purchase any type of (fruits and vegetables) regardless whether organically or conventionally grown.” Do you blame them? That “dirty dozen” list I mentioned earlier filled me with visions of vegetables saturated with toxic chemicals that I would ingest.The potatoes, carrots, and celery that served as the “base” of my crockpot stews were often on the “dirty dozen” list. The organic versions are also listed as 27 percent, 28 percent, and 44 percent more expensive than their conventional counterparts according to the USDA. It gets even more infuriating, organic proponents often prey upon the fears of mothers trying to keep their kids healthy. Organic baby food is listed as 29-31 percent more expensive than regular baby food. Low-income mothers have enough to worry about, let alone the safety of lower cost baby food. 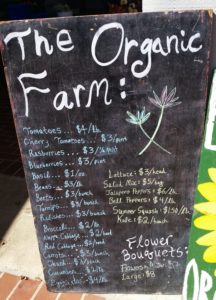 The National Institute of Health, a public institution not beholden to any corporate interests, funded a review of the “dirty dozen list.” It found : “that (1) exposures to the most commonly detected pesticides on the twelve commodities pose negligible risks to consumers, (2) substitution of organic forms of the twelve commodities for conventional forms does not result in any appreciable reduction of consumer risks, and (3) the methodology used by the environmental advocacy group to rank commodities with respect to pesticide risks lacks scientific credibility.”

These scare tactics should make anyone who proclaims to care about social justice angry!

Enrolling in a community college and now a four-year college has opened up doors and has improved my situation in life. I will be forever grateful to Dr. Stege, my Bio 101 professor, who spent the first few weeks of class going over basic scientific literacy. He had his work cut out for him as an educator in a “crunchy” city that was still very much in a red state. He introduced scientific literacy to those on the right who didn’t believe in evolution and climate change, as well as to those on the left who were fearful of GMOs and vaccines. In his class, I learned about the importance of skepticism, peer review and how to apply research to my everyday life. That knowledge has been crucial to my empowerment. Learning to understand how the world works to make informed decisions about one’s own life and future is the most basic form of personal liberation there is.

Sierra Zambrano’s background is in conservation and natural resource management. She received her bachelor’s degree from Evergreen State College. She is currently trying to bring the “good news” of skepticism, peer review, and GMOs to her “crunchy” campus that is famous for its protests and organic farm program. Follow her on Twitter @SierraZambrano

This article was originally published at Medium as “Why Any Social Justice Movement Must Include Scientific Literacy” and has been republished here with permission from the author.