A freedom of information request requesting emails from a University of California professor with “anti-chemical” views was rejected, while pro-GMO professors have their emails handed over.

Activist and journalist Paul Thacker wrote for the LA Times that:

If the public pays your salary, citizens have the right — within limits — to see what you’re doing. That’s the principle at the core of the federal Freedom of Information Act and of the many similar state freedom of information laws.

Arguing that rules for public scientists should be the same as any other civil servant, Thacker makes a strong case for the use of the Freedom of Information Act (FOIA). It was something I changed my own mind about once the evidence was presented to me.

Several years ago Organic Consumer’s Association helped fund US Right To Know (US RTK). Led by Gary Ruskin and Stacey Malkan, they began to use FOIA requests to peer into the inboxes of pro-GMO scientists. Claiming to target professors involved with an industry blog called GMO Answers, they also targeted professors that opposed Ruskin’s own GMO labeling initiative in California.

At least 10 professors in California alone were targets of Ruskin. These included Alison Van Eenennaam, Pamela Ronald, and Kent Bradford. The University of California system appears to have released the requested emails to Ruskin. Unfortunately, they recently rejected a similar request by myself for emails involving Professor Tracey Woodruff. 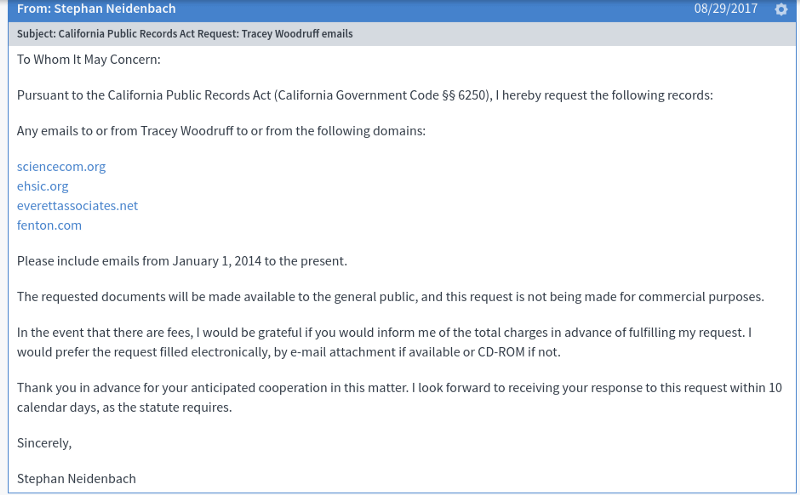 And by similar, I mean that. While early requests were very broad, I have begun to tighten up my requests to focus on specific searches. In this case, I was looking for emails between Woodruff and the public relations firm Fenton, along with their affiliated front organizations Science Communication Network and Environmental Health Sciences.

Much like the pro-GMO network developed by Ketchum, Fenton developed their own for professors that can help their own clients. Such clients include Stonyfield Organic, Ben & Jerry’s, Patagonia, and anti-GMO NGOs such as Sierra Club.

This is what industry does. Whether it’s the oil industry or the solar panel industry, they tend to find professors that already agree with them and give them a little boost in the press. This does not mean the professors are lying or are necessarily wrong. They are found because they already lean a certain way on issues, they don’t just change their mind based on funding.

The problem arises when one side attacks the other for using the same actions. Pro-GMO scientists are being called out in the press for having ties to industry (again, common in all areas of science), while those who are anti-GMO get a free pass on their own industry ties.

My request for Woodruff’s emails was rejected by the University of California based on the idea that the emails were “scholarly talk” and because the dialog involves “controversial political debate”. As a former senior scientist and policy adviser at the EPA, she certainly has impressive credentials and is often quoted in the press. Industry-funded groups, such as US RTK, in fact, use her in their campaigns to promote organic food over conventional.

This is the very reason the public has a right to communication between these groups and professors who are paid through tax dollars. Professor Woodruff appears to have devoted her life to transparency of chemicals in and around us. And yet when she is asked to be transparent herself, she declines.

Scientists who profess agreement with transparency only when its on their terms are really not for transparency at all. The public should be alarmed.

A version of this article appeared on Medium as “University releases pro-GMO professor emails, but not those of “anti-chemical” professor” and has been republished here with permission from the author.