This article or excerpt is included in the GLP’s daily curated selection of ideologically diverse news, opinion and analysis of biotechnology innovation.
Imagine a single injection into the knee vanquishing painful arthritis — forever. Gene therapies aimed at two molecular targets could make that possible, with one, Invossa,  already approved in South Korea.

“Arthritis” is a catch-all term for more than 100 varieties of joint inflammation. In the US, more than 30 million people have osteoarthritis (OA). The knee is particularly vulnerable, with arthritis there plaguing 10 percent of men and 13 percent of women aged 60 years or older.

Four events contribute to arthritis: inflammation, an increase in the volume of synovial fluid that fills joints, breakdown of the joint, and underlying bone damage. 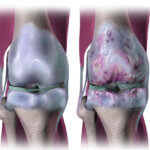 But these approaches are ephemeral — they must be taken consistently, fueling advertisements, if not lasting relief. In contrast, gene therapy gets to the root of the problem.

A challenge in treating OA is that it isn’t one disease.

“Not so long ago, many people thought it was simply the result of wear and tear — end of story. Now we appreciate more the biological changes that underlie OA,” said Christopher Evans, PhD, who heads the musculoskeletal gene therapy research lab at the Mayo Clinic. He’s lead author of a recent review article on knee gene therapy.

Evans and his colleagues are about to begin clinical trials of one gene therapy approach to treating OA. Said Evans:

Most gene therapy targets diseases, like hemophilia, cystic fibrosis, and Duchenne muscular dystrophy, that are Mendelian disorders where the therapeutic gene is obvious. In OA, there is no single obvious therapeutic target. Several pathologies are going on at once: the cartilage is breaking down, the synovium is inflamed, bone metabolism is altered and the patient feels pain. 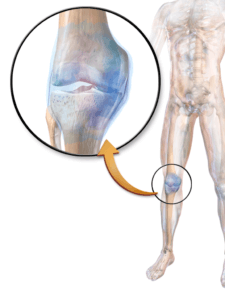 The landscape of a knee

A synovial joint is more than just a space between bones. The region between the cartilage caps on adjoining bones contains synovial fluid, which a surrounding membrane secretes. Nutrients seep into the fluid from the circulation, although the cartilage part of the joint has no direct blood supply, nerves, or lymphatic vessels. That’s why joints are notoriously slow to heal.

Many of the cells in a joint are cartilage cells, or chondrocytes, but the synovial membrane also houses a few macrophages (immune system gobblers), fibroblasts (which pump out collagens), and a smattering of mesenchymal progenitor cells, which may help surrounding injured ligaments to regenerate.

A challenge in developing drugs to treat synovial joints like that of the knee is that small molecules leave the area quickly, and large molecules must leave blood vessels and make their way through the surrounding extracellular matrix. In fact, gene therapies given systemically to treat single-gene diseases that affect joints as well as other body parts, such as hemophilia, require separate injections into the joints.

Even delivering cell-based treatments, like mesenchymal stem cells, isn’t very effective because the cells don’t stick around long enough to help. “Cells disappear from joints quite quickly, in days or at most 2 weeks after injection into joints. This may limit the duration of any beneficial effects,” Evans said.

The idea to use gene therapy to treat OA isn’t new — the first publication is from 1992. Targeting arthritic joints always had to meet a higher bar than untreatable fatal illnesses because OA affects only a few body parts and is obviously survivable.

Early gene therapy attempts were sidelined, along with many others, when retroviral vectors were found to pierce oncogenes and cause leukemia in 2003. Retroviruses have since been retooled to cut themselves out of chromosomes after they’ve delivered their cargo, while safer viruses have emerged — particularly adeno-associated viruses (AAV).

Of the eight gene therapy trials for OA listed at ClinicalTrials.gov, all but the one about to begin from the Mayo Clinic group were developed in South Korea.

TGF-beta 1 controls production of collagen and glycosaminoglycan, both key components of the noncellular material in the joint space. So boosting TGF-beta 1 should be a “disease-modifying” therapeutic.

The TGF-beta 1 genes aboard retroviruses are delivered in chondrocytes taken from a cell line cultured from finger bones of an infant born with polydactyly (extra fingers). Thirty million doctored cells were injected into one knee, one time, for 159 patients who were followed for a year, in the initial clinical trials. The phase 3 clinical trial about to begin in Baltimore will add 680 treated patients and 340 given placebo injections, and will follow them for two years.

Maryland’s TissueGene selected TGF-beta 1 because it stimulates repair of the joint cartilage, which many investigators consider central to OA, Evans said. His group chose IL-1Ra because in tackling the cytokine interleukin-1, it hits on many fronts — it’s anti-inflammatory, halts cartilage and bone damage, and may also reduce pain. “IL-1Ra is a small, naturally-occurring glycoprotein with an uncomplicated dose-response curve. It acts as a pure receptor antagonist with no agonist activity. This provides assurances against overdosing and greatly reduces the risk of adverse effects,” he said.

Evans’ group is using AAV which, unlike other vectors, can deliver its cargo straight to the affected chondrocytes in an inflamed joint – “in situ.” It’s therefore less of an intervention than cell-based gene therapy.

Their gene of choice, IL-1Ra, encodes a protein that’s already available as the drug anakinra (brand name Kineret). It’s an injectable biologic drug produced from recombinant DNA technology used since 2001 to treat rheumatoid arthritis. A study from 2009 indicates that it’s safe when injected into arthritic knees but over the 12-week course of the study, not effective. A protein-based drug isn’t the forever fix that a gene therapy might be.

So far the AAV-mediated OA gene therapy delivering IL-1Ra has had excellent results in horses. The phase 1 clinical trial at the Mayo clinic will begin in the summer on nine participants, testing three doses — 100 billion, a trillion, or 10 trillion “viral genomes.”

As more people hobble around exercise classes following knee and hip surgery, and with the 46 million people in the US aged 65 and older predicted to more than double by 2060, a single-shot treatment to help inflamed joints heal themselves can’t come too soon.