We know the placebo effect is biological. Is it also genetic?

This article or excerpt is included in the GLP’s daily curated selection of ideologically diverse news, opinion and analysis of biotechnology innovation.
Observed since the start of medical practice in ancient history, the placebo effect refers to the response people have to being treated — even though the ‘treatment’ in the placebo sense is a sham (in most cases dummy tablets, capsules, and the like made to look like an actual drug therapy).

It was first formally identified in 1955, in an article by Henry Beecher, “The Powerful Placebo”, in the Journal of the American Medical Association. According to an article by medical writer Susan Perry:

While treating wounded American soldiers during World War II, Henry Beecher ran out of pain-killing morphine. Desperate, he decided to continue telling the soldiers that he was giving them morphine, although he was actually infusing them with a saline solution. Amazingly, 40 percent of the soldiers reported that the saline treatment eased their pain.

What’s been incredibly interesting in clinical trials over the last several years and captured in excellent and groundbreaking works by Irving Kirsch and Ted Kaptchuk, is that the placebo effect has appeared to get ‘stronger,’ meaning that the magnitude of its effect has increased. What this looks like in practice is that the response of the group of subjects in a clinical trial which receives the placebo compared to the actual drug looks remarkably similar to the treatment group (getting the actual drug). This makes it very difficult in some cases to advance new drug therapies, because if the placebo ‘arm’ of the clinical trial performs so well, then the actual drug therapy has a harder time meeting the criteria for statistical significance in doing better than the placebo—which is a requirement for approval to market the drug.

As Perry explains it, the placebo effect appears to depend on a combination of verbal suggestions, observational cues and conditioning which together create expectations that activate the brain’s reward system. When people believe that a placebo is a real drug, brains produce more dopamine, a 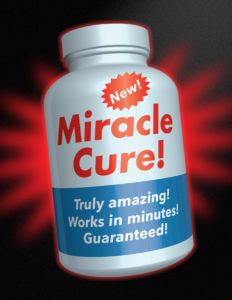 brain chemical strongly associated with reward and pleasure. So the biological effects of a placebo are similar to those of other pleasurable experiences, such as eating when hungry or drinking when thirsty.

Some new research shows an association that at least part suggests the placebo effect has a basis in human genetics as well as human biology. The researchers looked at different gene variants of a gene called ‘COMT’ which regulates the level of dopamine in the brain. They found a correlation between higher-dopamine variants of the gene and likelihood to report a placebo response. The trial groups were split in the following way:

Trial group 1: No treatment; The subjects were told that they couldn’t get treated anytime soon and were put on a waiting list

Trial group 2: Fake acupuncture was administered by an unfriendly participant

Trials group 3: Fake acupuncture was administered by a compassionate participant

The design of clinical trials is such that a drug treatment is measured against a placebo, or sometimes a comparator drug. But the placebo effect itself is very powerful–the placebo group in a trial isn’t receiving ‘no treatment,’ it’s receiving a ‘placebo treatment.’ 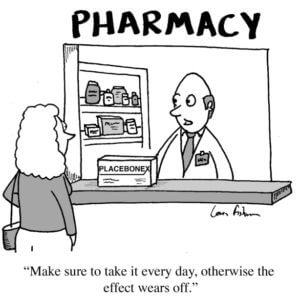 Related article:  Can genetics explain the degrees of misery inflicted by the coronavirus?

By the very etymology of the word, placebo means ‘I shall please’ in Latin. The treatment is itself the
administration of care, of listening, of the so-called ‘bedside manner’ in some cases. What clinical trials aren’t robustly measuring is the effect of drug and sham (dummy treatment) against a third baseline: no treatment. The assumption is that placebo represents the lack of treatment, but the placebo group is still receiving treatment, sham pills, check-ups, observation, etc. All of this creates something of an observer effect that changes behavior and expectancy of symptom resolution. Additionally, and not of minor importance, are the ethical practice considerations surrounding placebo and sham treatments.

This is hardly an open-and-shut topic, as finding a few genetic correlates does not tell us about the underlying causal mechanism or if the detected effect works in the same way via the same gene for any drug (though this does continue the discussion about progressing genetic screening to identify differential drug effects, placebo response, and overall better personalized medicine). Also, many tests of the power of placebo are run in non-standard ways and with ‘no treatment’ groups, and comparing results meta-analytically against actual drug clinical trials is very difficult to do–at least to draw reliable conclusions from.

To add additional gravity to the topic, it should also be mentioned that the placebo effect isn’t necessarily ‘just in the mind’; A review of arthroscopic partial meniscectomy (knee surgery) vs. sham surgery in the New England Journal of Medicine concluded that “The outcomes after arthroscopic partial meniscectomy were no better than those after a sham surgical procedure.”