Marc Brazeau | May 17, 2018
This article or excerpt is included in the GLP’s daily curated selection of ideologically diverse news, opinion and analysis of biotechnology innovation.

Can glyphosate impact gut health? The Guardian reports on a team of scientists who claim to have demonstrated that it can.

One of the report’s authors, Daniele Mandrioli, at the Ramazzini Institute in Bologna, Italy, said significant and potentially detrimental effects from glyphosate had been detected in the gut bacteria of rat pups born to mothers, who appeared to have been unaffected themselves.

“It shouldn’t be happening and it is quite remarkable that it is,” Mandrioli said. “Disruption of the microbiome has been associated with a number of negative health outcomes, such as obsesity, diabetes and immunological problems.”

Beyond that, the reporting on the study is thin to non-existent. Instead, the article mostly consists of other out of context, misleading, and incorrect factoids about potentially unknown health effects related to glyphosate. It’s standard issue Guardian reportage on glyphosate, right down to the links to everything other than the actual paper they were reporting on (always a bad sign), which could be found with a few minutes of sleuthing [PDF].

A reading of the paper finds far less dramatic results and lots of problems, which we’ll get to. Here’s one thing the Guardian reporting left out, that seems worth mentioning: 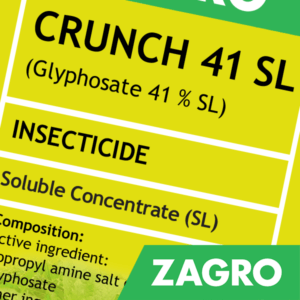 The basic story here is that they take a plausible sounding hypothesis – or at least plausible sounding to non-scientists – and conduct a statistical fishing trip through weak study design which is certain to produce “a result” which can be used as clickbait for unskilled health reporters and as agitprop by anti-biotech and anti-glyphosate activists. In this case, rather than the typical statistical fishing trip, instead, they mischaracterized and over-hyped an observation that is going to escape the notice of many health reporters.

The Ramazzini Institute has a reputation for being able to produce results that match their priors but not anyone else’s research. From Forbes contributor Trevor Butterworth:

“The problem hanging over the Splenda finding is that which hangs over the Ramazzini Institute in general: Quality control. No matter what substance the Institute tests for cancer, the results always seem to be positive, whereas other laboratories testing the same substances repeatedly fail to come up with the same findings.”

Dr. Landrigan isn’t known for his rigor of late either. Also worth noting that the Ramazzini Institute is flogging this paper prior to publication, rarely an indicator of well executed science. More often an indicator of agenda driven pseudoscience.

But is the hypothesis actually credible? Actually, not so much.

One of the reasons that glyphosate is considered to be relatively safe for humans and other mammals is that it targets a metabolic pathway in plants that mammals don’t have. The mode of action, the reason it is devastatingly toxic to plants is irrelevant to mammals. If it were toxic for mammals, it would be for a different reason than why it kills plants.

However, a new line of inquiry has popped up, that seems reasonable at first glance. That metabolic pathway – the shikimate pathway which allows plants to synthesize the aromatic amino acids phenylalanine, tyrosine and tryptophan – is also present in bacteria, including the bacteria that make up the gut flora, the microbiome that is crucial to our digestion, metabolism and other aspects of health. If residues from Roundup and other glyphosate based herbicides (GBH) are making their way into our digestive system, maybe they are inhibiting the shikimate pathway in our gut bacteria. This is what the paper aimed to test.

… exploring the effects of GBHs on the microbiota from early-life until adulthood in different windows of susceptibility, may give a more accurate portrayal of the microbial conditions that are involved in pathogenesis.

Possible alterations of the mammalian gut microbiota and its metabolites by environmental concentrations of GBHs in early development, starting from in utero, have never been explored in a controlled laboratory animal study. The present pilot study examines whether exposure to GBHs at doses of glyphosate considered to be “safe”, the US ADI of 1.75 mg/kg bw/day, defined as the chronic Reference Dose (cRfD) determined by the US EPA, affect the composition and diversity of the gut microbiome at early developmental stages in Sprague-Dawley rats.

Here’s the thing though, the shikimate pathway allows for the synthesis of aromatic amino acids, the digestive systems of humans – and rats – are chock full of aromatic amino acids. Gut bacteria have little to no need of producing their own. In fact, the shikimate hypothesis was given a much more robust workout in a paper published earlier this year. In that experiment, rats were fed doses of glyphosate or the commercial formulation Glyfonova®450 PLUS up to fifty times the established European Acceptable Daily Intake (ADI = 0.5 mg/kg body weight). They observed very small, short term effects of those very high doses suggesting that “sufficient intestinal levels of aromatic amino acids provided by the diet alleviates the need for bacterial synthesis of aromatic amino acids and thus prevents an antimicrobial effect of glyphosate in vivo.” (More here)

If you’d like to stop reading at this point, I wouldn’t blame you. For those soldiering on, we’ll look at some of the problems with the paper regardless of the fact that it wasn’t testing a credible hypothesis.

In the paper, they refer to the need to look at potential effects of GBH at “environmentally relevant doses”, but then end up testing the maximum levels considered to be safe. Whether the maximum exposure levels considered safe by the EPA are actually safe is a valid question to answer, but it’s not the same as testing environmentally relevant doses.

Related article:  Is EPA’s registration review of glyphosate being delayed for political reasons?

What are environmentally relevant doses?

If we look at the Farm Family Exposure Study data summary (part of the Agricultural Health Study), 60% of pesticide applicators in the study had detectable levels of glyphosate in their urine and the average urine level for was 3.2 parts per billion (ppb). Average urine levels for spouses and children of applicators was less than 1 part per billion with only 4% and 12%, respectively, of each group having detectable exposures.

Actual exposure levels were estimated from these urine levels in this peer reviewed paper. The average exposure of 3.2 ppb for applicators corresponds to a dose of 0.1% of the RfD. Even the highest urine level of 223 ppb reported in the Farm Family Exposure Study corresponds to be only 4% of the RfD. This is equivalent to 0.004 mg/kg/day rather than the RfD of 0.1 mg/kg/day for the most highly exposed individual who didn’t take appropriate safety precautions.

Other reports, such as this one, have measured urine levels in people whose only exposures are dietary, in an effort to gauge dietary exposure levels in non-pesticide applicators. The average urine levels in this study were 0.2 ppb, with a maximum level of 1.82 ppb. Despite methodological concerns and the fact that this report has not been published in a peer-reviewed scientific journal, the levels can be informative. Using the highest level detected, the estimated dietary exposure is only 0.1% of the EFSA RfD (equivalent to 0.5% of the EPA RfD).

Using even the highest estimates of exposures, pesticide applicators are exposed to levels of glyphosate that are a very small percentage of the safe limits. Consumers are exposed to much lower levels. Measures across other studies of agriculture and dietary exposures were consistent with these results.

So, environmentally relevant doses would be 1/1000th of the ADI rather than the full ADI.

At this point, it’s probably a bit petty to nitpick the study design after demolishing the entire premise, but there are a few issues worth noting, because they are emblematic of activist research.

The paper is poorly written. Some important things were hard, if not impossible, to figure out. Like what size are the experimental groups? There were 108 pups at post natal days 31 and 57 and 60 at day 125, the end point. As best I can tell, they were divided into six groups. But we are never told the sizes of the groups. If “N= …” appears anywhere in the paper, I can’t find it. Any way you slice it, 108 divided by 6 gives us an average group size of 18 with a 2 to 1 ratio of experimental subjects to controls, this is not an experiment with a lot of statistical power.

Asked about this paper, Alison Bernstein had this to say:

They did a metagenomic analysis of the gut microbiome using standard techniques and calculated diversity indices – also standard. Then they compared those diversity measures. This is not a case of them testing 100s of things and picking only the one. They tested things, essentially found a small change that seems to self-correct. The methods though are not reported in adequate detail, in my opinion, and I find it difficult to figure out exactly what they did. Without seeing their scripts, it’s hard to assess the methods.

Those MDS plots in Figure 2 look more like they cluster by age than anything else – in a very gestalt view, all the figures look like that to me – and remind me of this XKCD panel. 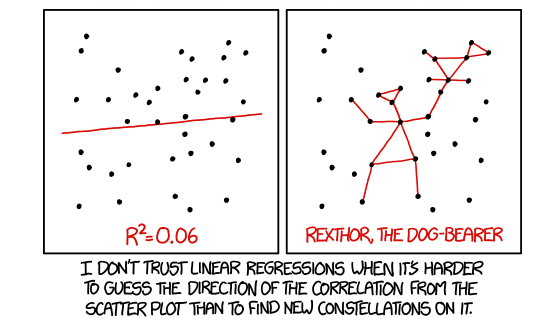 The results of this are relevant to setting an appropriate NOAEL (No-Observed-Adverse-Effect-Level) to be used to set safe limits. But whether this observed effect is “adverse” is unknown. The authors own report (quoted above) suggests it is not causing adverse effects. In addition, given that we know that real world exposures in the groups with highest exposures levels are orders of magnitude lower than the NOAEL and the RfD, the relevance to actual effects in current real life exposures is limited. This distinction between setting safety limits and modeling real life exposures is lost in the Guardian’s reporting – which is an odd PR push ahead of actual publication.

Not a Get Out of Jail Free Card

One last thing that should be addressed. It is a true fact that the science of the microbiome is an emerging field, with what we don’t know looming larger than what we do know. It’s a field where we should approach this issues with real humility regarding what we don’t know and what we might find out. There are those however that have seized on the uncertainty of microbiome research to insist that implausible ideas should be taken seriously regardless of a lack of evidence or credible mechanisms. Likewise, those people will use the uncertainty of microbiome science to dismiss strong evidence and analysis with some hand waving and chin stroking about “We just don’t know.”

This is irresponsible and dishonest. In this case, we have a lot epidemiogical evidence on the health effects of glyphosate from the Agricultural Health Study. And we have a lot of observational animal feeding trials. And it’s pretty clear that gut flora have access to plenty of amino acids without having to synthesize them. Insisting that there is some health effect that is still eluding our detection with some invocation of what we don’t yet know about the microbiome is not rigorous skepticism, it’s granting yourself a license to believe whatever you want despite the evidence or lack there of. It’s all too often used as a Get Out of Jail Free Card when the thing you want to believe isn’t supported by the evidence. That’s not science, that’s a cheap debate tactic.

Marc Brazeau is the GLP’s senior contributing writer focusing on agricultural biotechnology.  He also is the editor of Food and Farm Discussion Lab. Follow him on Twitter @eatcookwrite.