Do organic farmers really use more pesticides than conventional farmers? Not even close.

Marc Brazeau | May 21, 2018
This article or excerpt is included in the GLP’s daily curated selection of ideologically diverse news, opinion and analysis of biotechnology innovation.

This is part one of a four-part series attempting to separate fact from fiction regarding pesticide use on organic farms. In this installment, we look at the common claim that organic farms actually use more pesticides and more dangerous pesticides through the lens of a few simple observations and talking to actual organic farmers. In part two, we look at the factoids that have been taken out of context and twisted into a dishonest narrative. In part three, we look at the special cases of pest control in organic orchards and vineyards. Finally, in part four, we take a critical look at a widely circulated article purportedly busting myths about organic farming that managed to create a few myths.

As opinions about farming have become increasingly politicized and polarized, a really unfortunate trope has taken hold. In pushing back against the fear mongering about pesticide safety driven by organic marketers and the widespread consumer belief that organic farming means zero pesticides, some advocates for conventional agriculture have begun counter-mongering – claiming that, in fact, organic farms use MORE pesticides and the pesticides are MORE DANGEROUS than conventional pesticide use.

This all too common trope takes a few factoids and twists them in dishonest and unproductive ways.

We don’t have clean data on how much pesticides are used on organic farms. The vast majority of pesticides approved for organic use are used on conventional farms, and while data is collected on total sales (and amounts applied per acre, number of treatments per year, etc.), it is not broken down by whether farms are certified organic or not. We are left trying to get at the truth of the matter in a number of different ways.

First, the idea that organic farmers are secretly getting away with using more pesticides than conventional farmers can be dispensed with in a general sense by way of a few simple observations, before taking a more granular look at the issue. 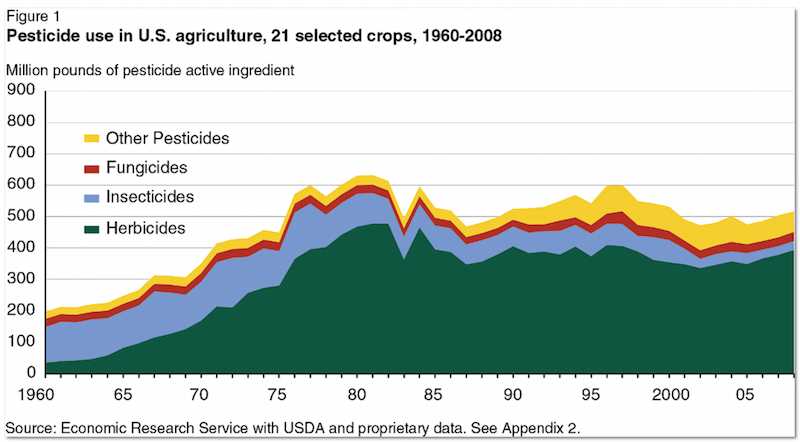 So, if you remove herbicides from the equation it’s hard to see how organic farms are going to end up using more pesticides then their conventional counterparts.

Although it’s not a perfect proxy for pesticide use or the impacts of pesticide use, measures of impacts on biodiversity, and on-farm biodiversity in particular, are a decent indicator of the impacts of pesticide use. While conventional systems consistently do better in comparisons to organic systems in terms of the environmental impacts I consider the most critical – greenhouse gas emissions, eutrophication and acidification potential, land use, and regional biodiversity – local and on-farm biodiversity is an area where organic systems consistently and significantly come out ahead of their conventional counterparts. If you are using more and more toxic pesticides, you aren’t going to have more critters: birds and bugs and bees around your farm. A 2005 meta-analysis found organic farms generally have 30% higher species richness and 50% higher abundance of organisms than conventional farms. Other studies since then have found similar effects.

Likewise, a report assembled by the Swedish Food Agency found that, while conventional was better for the environment on many metrics or found little difference, eco-toxicity was the one measure where organic systems performed consistently across the production of various crops and livestock animals.

So those are two relatively straightforward observations that have led me to be very skeptical of claims that organic farms are secretly using more pesticides than their conventional counterparts.

Next, I tried something pretty simple. I just asked some organic farmers what kinds of pesticides they used and how often. I started on the Food and Farm Discussion Lab Facebook forum that I run. Here is a sampling of answers:

Carolyn Olsen from Cottonwood, Minnesota raises organic corn, soybeans, alfalfa, wheat, and depending on year oats, barley, or triticale on 1,100 acres, and custom finishes around 7000 pigs a year (not organically certified) for a neighbor:

“Sometimes we use a foliar feed to prevent fungal issues in our small grain, but not every acre. I’d say less than 200 acres of our 1,100 acres total are treated. No pesticides are used on the corn, soy, or alfalfa.”

Adam Ornawka, who farms 4,100 acres of conventional and 640 acres of organic hemp, lentils, wheat, and oats in Saskatoon, Saskatchewan:

“I don’t use any pesticides with the exception of diatomaceous earth to keep bugs out of stored grain.”

“We use mostly foliar sprays of nutrients to boost plant health and immunity. We will use Entrust (an insecticide produced by Dow AgroSciences produced through the fermentation of a naturally occurring soil bacterium, spinosad), only with a threshold insect infestation, on organic apples and raspberries, based on field traps to monitor. Rarely more than once a year. Also PyGanic (an organic pyrethrum insecticide — derived from chrysanthemum flowers produced by Valent), only on raspberries for spotted wing Drosophila. We will use mineral and tree nut crop oils in early spring, not as an insecticide but smothering cover.

The main organic strategy is to have really healthy trees that are disease and pest resistant. Secondly use traps, pheromone disruption and barriers to discourage insect pests. Third, at last resort use products like Bt, Entrust, pyganic, lime sulfur, oxidate, crop oils to suppress insect, fungus infestations. In the last two years we have only used Entrust in early spring for apple flea weevil and crop oils on the trunks to smother plum curculio. Fruit itself was never sprayed.”

“We grow corn for silage and earlage, and a grass, alfalfa, and clover mix for silage, hay, and pasture. 180 acres of grass and 40 acres of corn. Zero pesticides used in our 6 years farming organically.”

“ Haven’t used a pesticide of any sort on our crops. Never really seen a need to. I find it amusing how much time conventional farmers spend talking about all the spraying organic farmers do since I don’t even own a sprayer. “

“Haven’t used a pesticide of any sort on our crops. Never really seen a need to. I find it amusing how much time conventional farmers spend talking about all the spraying organic farmers do since I don’t even own a sprayer.”

“We have been organic since 2006 and have never used any type of pesticides.”


“Between 1998 and 2015 we grew a few acres of organic vegetables, strawberries, and raspberries. Bt spray on cabbage, broccoli, and cauliflower (2-3 times per year) was the only pesticide that I didn’t quickly find a way to manage without. I did experiment with diatomaceous earth against striped cucumber beetle in particularly hot and dry years. I also did a trial with neem oil against Colorado potato beetle on potatoes and eggplant one year too – not that impressive. And back before the turn of the century (before it was de-registered for all agricultural use), I seem to recall dusting a few dozen melon transplants with rotenone.”

Jasen Gibbons, currently farming about 1,250 irrigated, organic acres in the Pacific Northwest. Corn, potatoes, alfalfa, buckwheat, small grains and a plethora of cover crop/beneficial mixes (and maybe a weed or two at times):

I get a kick out of my kids and their enthusiasm for wild animals and bugs. I had their preschool teacher ask me once what a “beneficial” is? It’s amazing to walk the fields and see how much life there is.”

I followed up and asked a few friends who work as organic inspectors and consultants for both conventional and organic farms to look over the comments on the thread. I wanted to know if what people were saying squared with their experiences and all three told me that it did. This was an admittedly self-selected group of farmers – they are all members of Food and Farm Discussion Lab, which has a certain culture, and they all chose to speak publicly about their pesticide use. Nor is it representative of some important aspect of organic production, notably large scale fresh produce in California’s Central Valley and vineyard production. We’ll cover those in part three. But this informal poll does reveal that it’s not at all uncommon for organic farmers to use little to no pesticide.

While plenty of conventional farms use robust integrated pest management (IPM), beneficial insects, and the cultural practices of diverse rotations, mulches, cover crops, and a focus on soil and plant health to control pests, they also have access to more effective and affordable pesticides. Organic farmers are required to use cover crops, more diverse rotations, and have to submit annual IPM plans as part of their certification. Beyond the prohibition on synthetic pesticides, whether it’s the cost and lesser effectiveness or a commitment flowing from a specific set of values, my experience is that organic farmers, by and large, turn to pesticides only as a last resort to a greater degree than conventional farmers. That trade-off affects other sets of environmental impacts. That’s a topic too large to get into in any detail for the purposes of this series. Regardless of whether you think those trade-offs are worth it or not, it’s pretty clear to me that organic farmers use pesticides very sparingly.

The exception to that rule is in citrus, vineyard, and orchard production, where many of those cultural practices are not options – you can’t rotate an apple orchard every year to break up pest cycles – so using pesticides sparingly is not an option either. We’ll take a look at the cases of orchard and vineyard pest control in part three.

Where did this idea come from?

Like most popular misconceptions, the idea that organic farming uses more pesticides and more dangerous pesticides springs from a few scraps of truth and accurate factoids. There are types of organic farms where the pesticide use is more impactful than their conventional counterparts. There was a highly toxic organic pesticide that was phased out of use around twenty years ago and a lot of people haven’t gotten the memo. And like most popular misconceptions, there was one piece of egregious reporting that became the source of misinformation for far too many people.

But to walk through all the history and nuance on this issue is going to take a few more installments.