Why are we afraid of synthetic blood?

David Warmflash | July 27, 2018
This article or excerpt is included in the GLP’s daily curated selection of ideologically diverse news, opinion and analysis of biotechnology innovation.

The idea that blood has a property of the supernatural is as old as humanity. Magical thinking about blood goes way back through ancient history, and probably far back through prehistoric times, and some aspect of that thinking seems to have persisted to modern times. Pagan human sacrifice revolved around blood. A common belief was that the blood had the properties of the person it came from. Christians believe they are consuming the blood of their savior during mass. Several TV programs dealing with vampires have been popular in recent years. Jehovah’s Witnesses, with a worldwide membership of roughly 8 million, prohibits its members from donating or receiving blood products, even when it’s a matter of life and death.

Blood is heavenly and pure—which may explain why Americans are wary about the use of emerging synthetic blood formulations to improve human performance; 63 percent of U.S. adults say they are worried about synthetic blood for enhancement. That’s according to a 2016 Pew poll, and they don’t mean because it would be unfair in athletic competition the way we might think about blood doping, rather, they think blood substitutes could do things like deliver oxygen to tissues more efficiently than natural blood would actually change human society.

That represents a pretty strong preconception, especially given that the principal application coming online for synthetic blood is not going to be enhancement of human physiology, but rather the maintenance of basic physiologic functions; in other words, to save lives, especially in trauma crisis situations.

Replacement of blood: a strange and eventful history

Even before physicians learned about the components that made up blood, they realized that blood was important. South America’s Inca civilization may have attempted blood transfusions, but documented research started in Europe in the the 1600s, after William Harvey figured out that blood circulated in the body through through arteries and veins. Since transfusion often proved fatal, physicians were looking for blood substitutes and were fairly adventurous in that area, trying a range of liquids from cow, goat, and human milk to beer. That didn’t work all that well.

Everything changed in the first decade of the 20th century with the discovery by Karl Landsteiner (University of Vienna), who discovered the ABO blood groups, and Reuben Ottenberg (Mt. Sinai Hospital, New York), who performed the first blood transfusion using cross matching based on those groups. Discoveries later in the century led to the recognition of addition ways to group blood, and ultimately to the blood banking system in use today in which donated blood is separated, and stored and administered, as red blood cells (RBCs), fresh frozen plasma (and similar types of plasma), platelets, and other components. This is called blood component therapy and it has made transfusion of whole blood obsolete, because whole blood has disadvantages. It is acidic, for instance, with too much potassium and ammonia, plus it is depleted in special proteins called clotting factors, which are needed to stop bleeding. 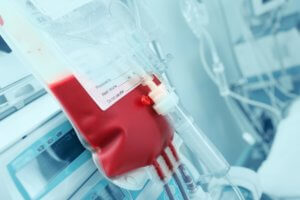 Thus, after trauma with massive blood loss, patients are infused with packed red blood cells (PRBCs), crystalloid fluids, and fresh frozen plasma (FFP), the latter being rich in clotting factors. In cases when patients’ platelet counts drop below a certain level, which happens in a variety of different medical conditions, patients are infused with platelets, but there’s no reason to give them the RBC component of donated blood, unless they are severely anemic. So essentially, blood component therapy is a mix and match system. That’s important to keep in mind as we consider synthetic blood products.

The current system is always subject to shortages. This problem is due to short shelf lives of red blood cells and other blood components and is exacerbated by the fact that not every donor is compatible with every recipient. Research is underway to convert all blood into type O-negative (the universal donor type), to create O-negative blood from stem cells, and to create it in genetically modified pigs or other non-humans. Those technologies are not completely ready, however, plus with blood donated from humans, or made in pigs, there’s also the potential for unrecognized infectious agents.

Clinical trials are underway, offering the potential for such products to be used to compensate for shortages. But beyond that, certain synthetic blood products under development could actually be better than donated products in certain clinical situations, namely situations in which the problem is not so much that they patient has lost blood, but that blood vessel obstruction prevents oxygen delivery to tissues by the usual oxygen carriers. This emerging capability for enhanced oxygen delivery concerns those who are uncomfortable with therapies that work by improving upon nature, because of their applicability to people who are not sick or injured but simply want to boost their capabilities. This could include athletes, but we might also envision military applications.

Products under development today are not synthetic blood in the literal sense, because they don’t do everything that natural blood does. Rather, they perform the blood function that the body requires most urgently, namely delivering oxygen (O2) into tissues, and removing carbon dioxide (CO2). So, technically, they are therapeutic oxygen carriers, but then so are PRBCs; consequently, they can be combined with plasma and other fluids similar to how PRBCs are combined.

There are two main categories of synthetic blood products: There are products that use hemoglobin, or variations of it, to carry O2 and CO2, and there are products that use oxygen-carrying molecules called perfluorocarbons (PFCs). Hemoglobin synthetic blood products include RBCs grown from stem cells in the laboratory. Researchers also are developing hemoglobin that can travel freely in the blood stream free rather than enclosed within RBCs. It’s challenging, because ordinary hemoglobin traveling freely in the blood is toxic to the kidneys, but the hemoglobin is altered in the synthetic products. 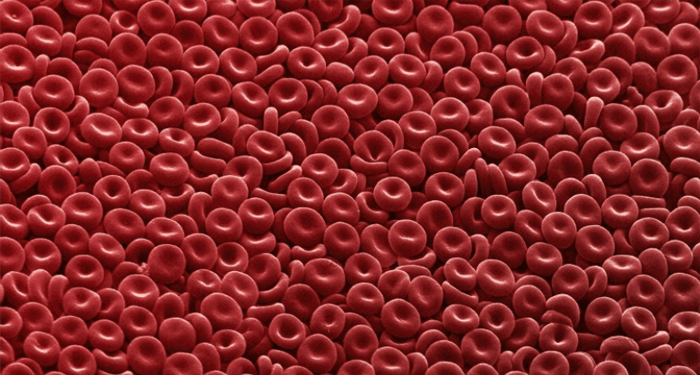 Advantages of hemoglobin-based synthetic blood is that once inside the patient it can function as normal red blood cells. Thus it can substitute for PRBCs that are given during surgery, trauma, or other settings involving  large blood loss. But there also are drawbacks. Just like natural blood, hemoglobin-based synthetic blood requires refrigeration and has a limited shelf life. Also, so far, it’s fairly difficult to produce it in large amounts.

In contrast, PFC blood substitutes have a shelf life up to a year and can be produced in large amounts. The big disadvantage is that the body removes them after just 48 hours, so PFCs are not useful to treat massive blood loss. Instead, their real potential is for treatment of acute, life-threatening conditions where the problem is not blood loss, but a deficiency of O2, or in some cases an excess of other gases. One potential application, for instance, is in ischemic stroke, where part of the brain or spinal cord is starved of O2, because of a clot, or other blockage of a blood vessel. Whereas RBCs travel in the center of blood vessels, making it hard to deliver O2 if there’s a clot, the PFCs can carry O2 through the outer parts of the vessel. Another application under study is decompression sickness (DCS). The standard treatment is hyperbaric oxygen therapy (HBO2), which requires patients to be put into a special chamber. In HBO2, the O2 helps flush out nitrogen (O2) bubbles from the blood, but in addition to carrying O2, PFCs also can take hold of N2. Thus, PFCs might be useful in cases of DCS, either as an adjunct treatment with HBO2, or as an early intervention at the site of the diving accident.

By loading body tissues with O2 and scrounging up N2, PFCs have been under study for potential diving medicine applications, so you can probably imagine that the navies of United States and other nations are major players in the research. Indeed, they are, but this raises another possibility. If a PFC blood substitute is useful for oxygenating tissues in somebody who is injured, or sick, might the military also find uses in people who are not injured?

It turns out that there are many imaginative ideas. Some form of PFC might allow for liquid breathing in which diver’s lungs can function similar to the gills of a fish. It might require some device attached to the diver’s mouth and nose, but oxygen as part of a liquid could be concentrated into much less volume than the in conventional diving tanks. Also, if a Navy SEAL, is diving shallow enough for breath-hold diving and simply needs to remain submerged for a long time, we could imagine a PFC injection used to keep his/her tissues oxygenated. In this way, the SEAL could travel light, without the burden of SCUBA, or other heavy, cumbersome diving equipment.

Then, the technology might make its way into recreational diving, and what comes next? Will mountain climbers use it as they ascend? Will swimmers take an injection, so they don’t need to breath in the midst of their strokes? That would be doping, of course. The same would be true if other land athletes were to inject PFCs, and this is what worries people. Clearly having a tank on your back when you submerge in water, or ascend a mountain, is human enhancement with technology. But for some reason, maybe remnant superstition from the Middle Ages, putting the technology inside the blood seems to freak people out — even of most of the time it will be used for saving lives.

A version of this story originally ran on the GLP on September 19, 2016.