In his article, “The Earth’s Carrying Capacity for Human Life is Not Fixed,” Ted Nordhaus, co-founder of the Breakthrough Institute, a California-based energy and environment think tank, seeks to enlist readers in his optimistic vision of the future. It’s a future in which there are many more people on the planet and each enjoys a high standard of living, while environmental impacts are reduced. It’s a cheery vision.

If only it were plausible.

Nordhaus’s argument hinges on dismissing the longstanding biological concept of “carrying capacity” — the number of organisms an environment can support without becoming degraded. “Applied to ecology, the concept [of carrying capacity] is problematic,” Nordhaus writes, arguing in a nutshell that the planet’s ability to support human civilization can be, one presumes, infinitely tweaked through a combination of social and physical engineering.

Few actual ecologists, however, would agree. Indeed, the concept of carrying capacity is useful in instance after instance — including modeling the population dynamics of nonhuman species, and in gauging the health of virtually any ecosystem, be it ocean, river, prairie, desert, or forest. While exact population numbers are sometimes difficult to predict on the basis of the carrying capacity concept, it is nevertheless clear that, wherever habitat is degraded, creatures suffer and their numbers decline.

The controversy deepens in applying the carrying capacity concept to humans. Nordhaus seems to think we are exceptions to the rules. Still, as archaeologists have affirmed, many past human societies consumed resources or polluted environments to the point of collapse. Granted, societies have failed for other reasons as well, including invasion, over-extension of empire, or natural climate change. Yet in cases where societies depleted forests, fisheries, freshwater, or topsoil, the consequences were dire.

But that was then. The core of Nordhaus’ case is that we are now living in a magical society that is immune to the ecological law of gravity. Yes, it is beyond dispute that the modern industrial world has been able to temporarily expand Earth’s carrying capacity for our species. As Nordhaus points out, population has grown dramatically (from less than a billion in 1800 to 7.6 billion today), and so has per capita consumption. No previous society was able to support so many people at such a high level of amenity. If we’ve managed to stretch carrying capacity this much already, why can’t we do so ad infinitum?

To answer the question, it’s first important to understand the basis of our success so far. Science and technology usually glean most of the credit, and they deserve their share. But sheer energy — the bulk of it from fossil fuels — has been at least as important a factor. 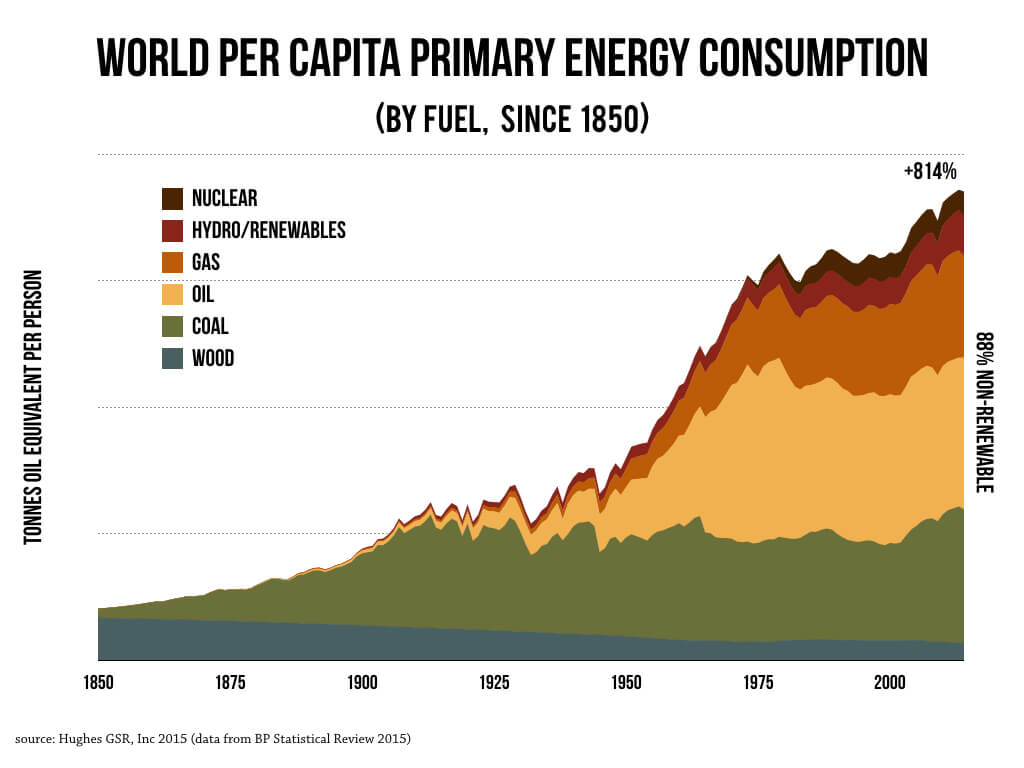 With lots of cheap energy, we were able to extract raw materials faster and in greater quantities, transport them further, and transform them through industrial processes into a breathtaking array of goods — including fertilizers, pesticides, and antibiotics, all of which tended to reduce human death rates.

But there was still another essential factor in our success: nature itself. Using science, technology, and cheap energy, we expanded farmlands, chain-sawed forests, exploited fisheries, mined minerals, pumped oil, and flattened mountains for their buried coal. And we did these things in a way that was not remotely sustainable. By harvesting renewable resources faster than they could regrow, by using non-renewable resources that could not be recycled, and by choking environments with industrial wastes, we were borrowing from future generations and from other species.

Nordhaus writes: “For decades, each increment of economic growth in developed economies has brought lower resource and energy use than the last.” This trend of severing the tie between GDP and energy/materials throughput is called “decoupling.” Many economists make big claims for past decoupling and promise much more of it in the future. But careful analysis of decoupling to date shows that most is attributable to accounting error. And to get the developing world up to the level of an average American’s energy usage would require nearly quadrupling global energy consumption, even assuming advances in efficiency. So, unless we find ways to make decoupling actually happen in the future more reliably and at higher rates, growing the global economy will require us to use more of the Earth’s depleted resources.

Related article:  No, humans haven't wiped out 60 percent of animals since 1970. But things still look ugly

It is true that some past warnings about the consequences of overpopulation and overconsumption, framed as forecasts, proved wrong. Thomas Malthus famously thought famine would engulf humanity within decades; it didn’t. He failed to foresee industrial agriculture. Paul Ehrlich thought rapid population growth would lead to catastrophe in the 1980s, but he failed to anticipate the impacts of globalization and debt — which enables us to consume now and pay later. Peak oil analysts didn’t foresee the fracking frenzy. Yet cornucopian economists who perceive no problem in the expectation of endless growth on a finite planet likewise failed to foresee climate change, the exponential increase in extinction rates primarily as a result of human-caused habitat degradation, the collapse of fisheries from overfishing, and much, much more.

How can we judge whether cornucopians, or so-called Malthusians, will be right in the long run? One way would be to keep a running account of key biophysical factors on which the prospering of our species depends. If an alarm bell sounds for any of those key factors, we should sit up and pay attention. After all, Liebig’s Law (another foundation of ecology) tells us that growth limits are set not by total resources available, but by the single scarcest necessary resource.

Fortunately, somebody is keeping those accounts. Indeed, a cottage industry of environmental scientists, led by Johan Rockström of the Stockholm Resilience Center and Will Steffen of the Australian National University, has identified nine planetary boundaries that we transgress at our peril: climate change, ocean acidification, biosphere integrity, biochemical flows, land-system change, freshwater use, stratospheric ozone depletion, atmospheric aerosol loading, and the introduction of novel entities into environments.

We are currently exceeding the “safe” marks for four of these boundaries:

Another way of keeping track is the ecological footprint, which measures human demand on nature in terms of the quantity of land and water it takes to support an economy sustainably. The Global Footprint Network calculates that humanity is currently exceeding Earth’s sustainable productivity by 60 percent. We do this, again, by drawing down resources that future generations and other species would otherwise use. So, as a result of our actions, Earth’s long-term carrying capacity for humans is actually declining. Nordhaus is right that it’s not a fixed quantity; the problem is that we’re reducing it rather than adding to it in a way that can be maintained.

Devise your own scorecard. What warning signs would you expect to see if we humans were pressing at the limits of global carrying capacity? Resource depletion? Check. Pollution? Check. Dying oceans? Check. Human populations subjected to increasing stress? Double check.

Here’s one more that we probably should be paying more attention to: Wild terrestrial mammals now represent just 4.2 percent of terrestrial mammalian biomass, the balance — 95.8 percent — being livestock and humans. Maybe we could make some inroads on that remaining 4.2 percent, but it’s pretty clear from this single statistic that we humans have already commandeered most of the biosphere.

Optimism is essential; it draws us toward the best possible futures. But when it turns into wishful thinking, it can blind us to the consequences of our present actions. In the worst potential case, the results could be collectively suicidal.

Richard Heinberg is the author of 13 books and a Senior Fellow with the Post Carbon Institute. His essays and articles have appeared in print or online at Nature, Reuters, The Wall Street Journal, The American Prospect, Public Policy Research, the Quarterly Review, Resilience, The Oil Drum, and Pacific Standard, among other publications. Follow him on Twitter @richardheinberg.

A version of this article was originally published on Undark’s website as “Ted Nordhaus Is Wrong: We Are Exceeding Earth’s Carrying Capacity” and has been republished here with permission.