This article or excerpt is included in the GLP’s daily curated selection of ideologically diverse news, opinion and analysis of biotechnology innovation.
The continuing debates over whether the herbicide glyphosate or the insecticide class of neonicotinoids (neonics) could—or should—remain available for farmers and other users has been met with simplistic arguments both pro and con:

Pro ban: These chemicals are dangerous, they may kill bees and other life and shouldn’t be allowed near our food.
Anti ban: These chemicals have been widely tested and proved safe, they are absolutely necessary and if removed from the market will force farmers to use more ineffective and dangerous chemicals.

Which answer is more accurate? Neither, because farmers take a far more nuanced approach to pest management than these two divergent views suggest.

The French government on August 31 banned five neonics from use in agriculture. The decision was hailed by beekeepers and environmentalists, and protested by farmers. Meanwhile, glyphosate is guaranteed to be up for debate at least in the European community, as temporary approvals mean another round of debates and suspense.

Do farmers answer their pesticide questions with the popular “either or” or “if not this, then that” approach? Not really, farmers and agriculture experts say.

The decision on which pesticide to use, at which time, and on what crop, and to stave off which pest, is not taken lightly. There are regulations, on the nation and state level, on how this is done. In California, farmers by law can take recommendations about commercial pesticide applications only from licensed pest control advisors, and it’s their job to keep up on current regulations and products.

Jeffrey Bradshaw, assistant professor of entomology at the University of Nebraska, detailed what goes through a farmer’s head when making these decisions:

Decisions on pesticide use (or any input cost for that matter) are strongly governed by crop value and risk perception. Generally speaking, the higher the crop value, the more risk averse the crop manager is going to be. The sensitivity to this risk is going to vary somewhat by crop, cropping system, and environment. Now seed-applied insecticides (and transgenic technologies) challenge this equation somewhat because the cost of the treatment (in the case of transgenic seed or treated and packaged seed) is masked and their use is not based on scouting decisions, but field history. Depending on the pest, field history may or may not be the most accurate “action threshold” on which to base next year’s seed purchase.

What would happen if a seed treatment like the neonics were banned? Bradshaw said:

Were seed treatments banned from use would it result in more toxic insecticide use? It’s hard to say. Upon the adoption of transgenic traits and seed treatments, many growers abandoned their in-furrow insecticide application equipment to the scrap yard. Current crop values generally do not seem to be supportive for growers to invest more in equipment. Though if there were an EPA ban on seed-applied insecticides, some growers would drag out their old granular applicator boxes or look into tank-mixing an insecticide with their lay-by fertilizer application. 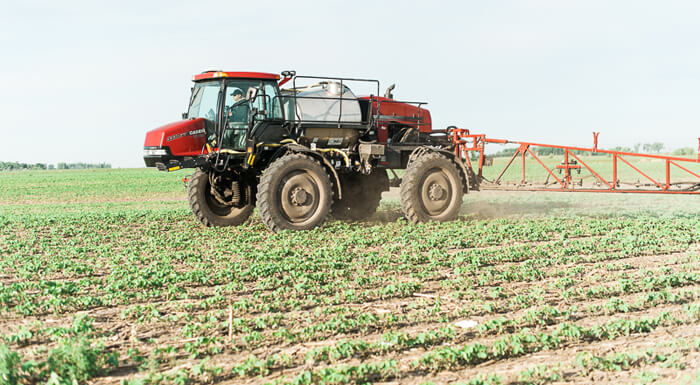 Agricultural extension agencies also provide sophisticated online tools to help farmers wade through the variety of pesticides and farming conditions to help arrive at solutions. Removing a pesticide from consideration does not mean, therefore, that a farmer will cease to use agricultural chemicals. He/she will have to use others that are available.

Some of these chemicals leave a more toxic legacy behind their use, and still more are less specific than others, meaning that they can harm beneficial insects or other crops. In an article for the Genetic Literacy Project, Food Farm Discussion Lab editor Marc Brazeau quoted farmers who reacted to a ban on the glyphosate herbicide:

Higher rates of pre-emergence control combined with 2,4D or Gamoxone (paraquat), possibly Liberty/glufosinate, but that is more costly. We do already rotate modes of action so if we burn down cover crop with glyphosate we will use gramoxone in our pre-emergent spray.

I used diquat this year as a defoliant but use glyphosate for no-till. We don’t have paraquat here and I’d not use it anyway due to the toxicity.

Brazeau also compared the No Observable Effect Level (NOEL), a dose at which animal exposure had no effect on the animal:

But glyphosate is the only chemical on this list that can be used with crops genetically modified to resist its effects, making it a target of activism. Meanwhile, all chemicals make up part of the farmer’s arsenal, and all, while closely regulated, pack some degree of danger, especially if not used correctly.

These issues are not lost on organic growers, either. Phil McGrath, an organic grower in Oxnard, California, told the Los Angeles Food Policy Council in 2013 that “Because we’re an organic farm, insects can be a problem, but using soaps and oils for insect control is still less expensive than commercial pesticides.” McGrath observed that since two soil fumigants useful for growing strawberries were banned, many farmers looked toward growing other crops (a major financial decision, since strawberries are a very high-value crop). McGrath’s farm rotates among crops, and “We started using rice hulls as an organic fumigant. Incorporating them below our strawberry plant bed to keep soil-borne diseases and pests away. Some preliminary trials have shown better results lasting up to three years.”

Variety also is important to fend off resistance to the pesticide, which has afflicted nearly every type of agricultural chemical that’s ever been used. Not using glyphosate may be an intelligent choice in this case, switching, as many farmers have, to 2,4D or dicamba, or even atrazine. Given that there hasn’t been a new herbicide designed against a novel biological target in 30 years, the need for variety is even greater.

Whatever the pesticide, anything used on a farm must have passed through approval by federal agencies, including the US Environmental Protection Agency. These approvals not only evaluate overall toxicity, but also recommend the dosages to be used on farms and, ultimately, the amounts of residues on food sold to consumers considered safe.

Any decision, such as banning glyphosate, essentially limits choice for no rational reason, which makes Integrated Pest Management less rational and therefore less ecological. IPM is a darling of environmentalists, because many believe that it is a more “natural” way to grow food without the use of pesticides. While most farmers do not adopt every rule of IPM, it is used more as a spectrum of adoption, with some practices adopted and others ignored. But even among ardent users of IPM, using agricultural chemicals is still part of the equation.

Terry Daynard is a grain farmer in Ontario who was executive vice president of the Ontario Corn Producers Association and a former University of Guelph crop science professor. In an interview, he said:

I would expect that anyone who is seriously in this business employs IPM to some degree. You can’t afford not to. For weeds you keep records of what weeds are where this year and plane your initial herbicide applications around that for next year. Then you scout the crop regularly and apply subsequent applications if needed depending on the nature of the weed problem to follow. For example, I planted glyphosate-tolerant corn this spring though the initial herbicide applied was a different chemical. My plan was to apply glyphosate if needed when the corn was about knee high. However, scouting at that time said that the weed density was low enough that further herbicide application was not needed. Hence, my glyph-tolerant corn never did see glyphosate in 2018.

So, yes, we use IPM in some manner and the pesticide application programs usually differ for each year – often each field too. When a product is removed or restricted, farmers adjust as best they can – and if they can’t control the problem, they shift to other crops. We are seeing the latter in northern Europe where, without neonic seed treatments and resulting flea beetle damage to oilseed rape, some farmers are spraying much more with other products. Other farmers have just stopped growing that crop.