Can we control our dreams through gene therapy?

We are such stuff as dreams are made on, and our little life is rounded with a sleep.

The film Total Recall features Arnold Schwarzenegger as a protagonist whose mind has been altered with uploaded memories and dreams concerning events on Mars. When the film was released in 1990, no one had any idea how any such dream manipulation could work.

Twenty-eight years later, we’re not any closer to understanding. That’s despite a fascinating new understanding of how genes seem to influence dream content, and the growing reality of genetic modification via gene therapy. Dream content modification is nowhere in sight, but not because of our inability to edit genes within the body. Instead, it’s because of the complex relationship between our genes and our dreams.

There are many factors influencing the content of dreams. For most of human history, people thought dreams were supernatural. Evidence of long-standing curiosity over dreams can be found in  centuries of literature—from the biblical story of Joseph using dreams to predict the future to the musings of William Shakespeare. In the late 19th century, however, Sigmund Freud, explained that dreams came from within a person’s own thoughts and memories. The Freudian idea placed an enormous emphasis on sexual feelings. Modern psychologists have backed away from this line of thought, somewhat, but the basic idea that we think up our own dreams hasn’t changed. The content is inside your brain. If you’re worried or excited about something, there’s a good chance that you’ll dream about it

But there are other factors—age and gender, for example—that influence dream content. In children up to age 7 or 8, the dreamer tends not to be an active character in the dream. It’s as if the child were watching a movie or cartoon. Furthermore, the ability to recall dreams improves after age 8 or
so, and both of these phenomena make sense with respect to the development of cognitive ability. 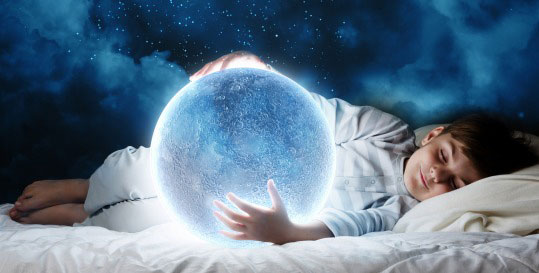 In the range of 11 to 15 years, perceived threats have a major impact on dream content. Threats might show up in a dream in which the young person is chased by a monster. Dreaming and its content also are affected by sleep quality, which is influenced in turn by whether or not one sleeps alone. Women, in particular, have better sleep quality when sleeping without a partner. Females also tend to report bright colors in their dreams, and there is some evidence that they tend to see things glowing and glittering in their dreams during the days of menstruation.

Psychiatric conditions can impact dreams. In people with obsessive-compulsive disorder, for example, there is evidence that obsessive themes can work their way into dreams. There’s a condition called REM sleep behavior disorder in which dream content tends to be more of an aggressive nature compared with dreams in people without the disorder. Breathing difficulty during sleep—along with body positions that may affect breathing—is associated with an elevated frequency of nightmares. Evidence also suggests that strong odors increase the emotional content of dreams.

A study published in the journal Nature describes genetic influences on the brain processes in mice that go along with dreaming in humans. Produced by researchers at the University of Tsukuba in Japan, the study has revealed complex molecular mechanisms affecting sleep and rapid eye movement, or REM, sleep (the part of sleep during which humans dream). But the researchers identified two key genes involved in the control of dreaming and the amount of REM and non-REM sleep.

The study, which included 8,000 mice, has been hyped for the possibility that it could lead to the end of nightmares. But is it really possible that we could learn to control dream content with some kind of gene therapy? It’s not likely, considering that sleep is affected by numerous genes. There are also the external factors discussed in the previous section. So don’t start making plans to purchase gene therapy for the hottest new dreams any time soon. You’re better off watching a good movie instead.

A version of this article originally appeared on the GLP on December 5, 2016.