“My greatest fear is this brain of mine….The worst thing imaginable is to be terrified of one’s own mind, the very matter that controls all that we are and all that we do and feel.”

These are the words of a patient suffering from schizophrenia, a tragic and severe psychiatric disorder that affects how a person thinks, feels, and behaves. This disease is often characterized by abnormal social behavior and disrupted perceptions of reality, and classic symptoms include delusions, hallucinations, and disorganized thinking. Patients also suffer disruptions in normal emotions or behaviors, such as decreased motivation, social withdrawal, and inability to make decisions or pay attention. While schizophrenia is not a particularly common disease (1.2 percent of Americans have been diagnosed), its chronic nature results in expensive and long-lasting effects, with the cost of care in the U.S. estimated to be $62.7 billion in 2002. Non-economic burdens placed on caregivers and self-esteem issues or internalized social stigmas experienced by patients 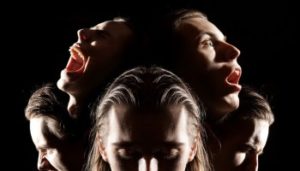 demonstrate the large humanistic repercussions of this disorder.

Given the large burden of schizophrenia on our society, it behooves us to gain a better understanding of this disorder so that more effective treatments can be developed. Because schizophrenia has been demonstrated to be highly heritable, researchers can use genetics to understand the causes of this disease and explore potential avenues for therapy. Thankfully, recent advances in our understanding of the human genome and rapidly decreasing costs of genetic sequencing are making genetic studies a viable route not just for schizophrenia, but any psychiatric disorder with a genetic component.

You inherit your DNA from your parents, a process that requires repeated copying of the genome. But sometimes, the machinery that does this can make an error, resulting in a change in the DNA sequence. Such errors (i.e. mutations), and can be either acquired or heritable. Acquired mutations are those that happen during your lifetime, often from environmental factors (like detrimental UV rays), and are only present in a subset of your cells. Unless these mutations occur in egg or sperm cells, they cannot be passed on to the next generation. Heritable mutations, on the other hand, are inherited from the parent and are therefore in all of your cells (including egg and sperm cells). Some mutations have debilitating effects that lead to diseases (cystic fibrosis and Huntington’s disease are two examples of purely genetic disorders), but many times a mutation can have an effect that is benign or not immediately detrimental.

Mutations come in many forms, with the most common being single nucleotide polymorphisms (SNPs, pronounced “snips”). As shown in Figure 1, each SNP is a difference in a single “letter” of DNA (called nucleotide bases and represented by the letters A, T, C, and G). With an average occurrence of 1 per 300 base pairs, there are about 10 million of these small differences (SNPs) in each of our genomes. SNPs often do not cause any overt phenotypes (visible characteristics), and instead have only subtle effects, such as influencing your susceptibility to certain environmental factors, responses to medications, or risk for particular disorders.

Researchers can harness the power of SNPs to determine whether genetic variants cause a particular trait (often a disease) by conducting what are known as genome-wide association studies (GWAS). These studies involve scanning individuals’ entire genome for SNPs to determine which, if any, SNPs occur more frequently in people with a particular disease than in people without this disease (Figure 2). Because we have so many SNPs in our genome, researchers must test hundreds or often thousands of individual DNA samples to be certain of a disease association.

Data from these studies can then be used to pinpoint genes or genetic locations (these physical locations of genes on our chromosomes are termed “loci”) that may contribute to a person’s risk of developing a certain disease. Such studies are made possible by the completion of the Human Genome Project in 2003 and the HapMap Project in 2005, which produced necessary resources, including a reference database of human genome sequences, a map of human genetic variation, and a set of new technologies to quickly and accurately analyze whole genomes. These resources set the stage for researchers to explore diseases with complex etiologies in a new way. Schizophrenia is one disorder in particular about which genetic and genome-wide association studies have revealed new information and potential treatment options.

The use of GWAS changed the game for researchers looking to understand the genetic underpinnings of a disorder as complicated as schizophrenia. Notably, in 2014, in what was at the time the largest-yet genetic study of mental illness, researchers identified 108 loci that are associated with schizophrenia. This study illustrates the remarkable power of such studies in several ways. First, it highlights the complexity of the genetic components of schizophrenia, which would be difficult to understand without using an equally open-ended technique.

Related article:  Dark humor memes about suicide, death and isolation may help depressed people cope with their own problems

Second, these risk loci are not scattered randomly across the genome; they converge on genes that are expressed in certain tissues and cellular types, thereby indicating potential therapeutic targets. Perhaps unsurprisingly, this GWAS implicated genes that are highly expressed in the brain and are involved in synaptic function (synapses are the connections between neurons). So while many potential gene targets were identified, common locations and mechanisms of action point researchers to where they may want to focus their research efforts.

Unfortunately, the extensive GWAS findings have not revealed a great deal about the high heritability of schizophrenia. Even though more than one hundred SNPs have been identified as risk factors, the functional implication remains unclear for most. This is largely because identifying SNPs only points to risk loci, which is not always equivalent to finding a disease-causing gene. Loci may be in regions of DNA without genes (termed “non-coding DNA”); these non-coding regions often have an impact on other genes, but it can be difficult to dissect these relationships. Additionally, several variations may occur in one region, making it difficult to know which loci are the true risk factors. Finally, disease-associated SNPs may not be directly causing the disease but instead may just be hitching a ride along with the actual causal SNPs.

Excitingly, a study conducted at the Broad Institute and Harvard Medical School identified a major gene at play in schizophrenia. The researchers analyzed the genomes of 65,000 people and 700 post-mortem brains, focusing on one specific risk locus in particular: the major histocompatibility complex (MHC) locus, located on chromosome 6. In past GWAS, this swath of the genome, known to contain several genes involved in immune function, has continued to show the strongest association with schizophrenia risk. In this study, by looking at subtle differences in the MHC locus, this research group ultimately discovered that variation in the gene complement component 4 (C4) was the culprit. Importantly, they found that C4 comes in two major forms – A and B – with form A associating with schizophrenia.

Researchers took this one step further by using mice to study what C4 might be doing in the brain, and therefore what could be going wrong and causing schizophrenia. Previously, C4 was only known for its involvement in the immune system, so what possible role could it play in schizophrenia? To this end, they discovered a previously unknown role for C4 in brain development – during postnatal brain maturation, C4 seems to be involved in synapse pruning.

Synapses are the connections between neurons, and in the pruning process, unnecessary connections are eliminated, ultimately allowing your brain to function more efficiently and normally. In humans, pruning of synapses needs to occur as the brain finishes maturing in the late teens/early twenties – right about the time schizophrenia symptoms begin to appear. Observing the post-mortem brains of schizophrenia patients has previously shown that they have decreased synapse number in the brain (Figure 3); therefore this latest finding implicates C4 as being responsible for this abnormal loss of synapses. Ultimately, this study may lead to treatments designed to suppress excessive levels of pruning by halting C4’s action in at-risk individuals. If treated early enough in the process, such treatment could possibly prevent the psychotic illness from fully developing. While many have looked for a major genetic component for schizophrenia, this is the first finding of a gene at play in so many patients that has such a dramatic effect, making it a leading player in future therapy development.

Our knowledge and treatment of psychiatric illnesses has thankfully advanced beyond archaic and disturbing practices such as trepanning and lobotomies, but we still know very little about the underlying causes of many disorders. Recent advances in understanding the role genetics may play have improved not only our understanding of such disorders, but more importantly, their treatment. As demonstrated in studies of schizophrenia, harnessing the power of GWAS can facilitate major breakthroughs in our understanding of psychiatric illnesses, leading to potential treatments. Revealing the role that genetics plays in complex mental disorders can help us better understand how such disorders arise, improve treatment regimens, and ultimately lift the social stigma surrounding mental illness.

A version of this article originally appeared on the GLP on January 16, 2017. It was first published as part of Science in the News’s April 2016 Special Edition on Neurotechnology.

Emily Kuehn is a NRC Fellow at Walter Reed Army Institute of Research. Figures were prepared by Kaitlyn Choi. Follow Science in the News on Twitter @SITNBoston