When perusing your neighborhood farmer’s market for the best head of kale, you should be cognizant of the fact that there’s something these vendors aren’t telling you: the ‘eat local’ movement is broken.

No, it’s not the fact they use pesticides or the antibiotic fed livestock, it’s because one of the central tenets of the movement — to reduce greenhouse gas and carbon emissions — is not being fulfilled. People who eat local believe that because their food doesn’t travel far from farm to plate they are doing something good for the environment. While this idea might be well meaning, for a variety of reasons it just doesn’t pan out.

An estimate that frequents many locavore websites maintains that food, on average, travels 1,500 miles to get to your plate. That’s about the distance from Dallas, Texas to Boston, Massachusetts. Another estimate says it is as high as 4,200 miles. During this distance, food mile counters assert that carbon emissions soar. However farming and food processing is not as simple as an odometer. In short, farming is a practice that can create a tremendous amount of emissions depending on a variety of factors.

One factor that can affect emissions is mode of travel. A study performed by the UK Department of Transportation found that North American cherries had the highest ratio of emissions to product of any crop. This was despite the fact that apples from New Zealand traveled a further distance. The difference? The apples traveled by sea which is much more energy efficient than the planes that carried the cherries.

On the other hand, data have shown that actual food transport to markets around the world doesn’t have a large impact on overall emissions. In Britain, yearly there is an estimated 30 billion food miles for UK-consumed food. Of that, 48 percent of those miles were from consumers driving the food home from the market.

Expert James McWilliams author of the book Just Food: Where Locavores Get It Wrong and How We Can Truly Eat Responsibly, says people need to stop thinking of crops as being transported alone. He uses an example of a tomato traveling 2,000 miles  with 2,000 other tomatoes. Much like buying in bulk is cheaper in price, transportation in bulk is much more efficient than the tens of thousands of people who will buy a single tomato and drive it home. All told, about 20 percent of total emissions from food are from consumer transportation.

Overall, supply-chain transportation contributes to an estimated 5-6 percent of all carbon emissions. While measures to reduce this impact should not be ignored, it should not be the sole focus as the eat local movement makes it out to be. What should be a major focus is farming production which contributes to about 45 percent of carbon emissions. This is where biotechnology can be of some service.

There’s a reason that certain places are known for particular crops. A number of factors like precipitation, weather and seasons combine to make a hospitable environment for a specific plant to flourish. Modern humans have found workarounds when the environment is less favorable, but the cost of these, we are now realizing, is higher emissions.

In Sweden, a study found that it was more environmentally friendly to buy tomatoes produced in Spain than purchasing them locally. The climate in Spain allows the tomatoes to grow in fields, compared to the situation in Sweden where tomatoes had to be grown indoors (i.e. greenhouses) which required the burning of fuel for energy. All told, shipping in tomatoes from Spain produced about one fifth of the total carbon emissions as the locally grown ones in Sweden. Another study found a similar story in the UK when comparing buying local tomatoes and Spanish grown ones. 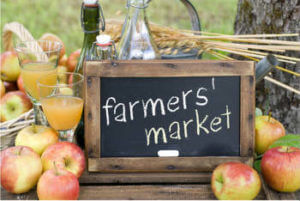 The story is not exclusive to crops though. Meat has also been wrapped up into the locavore movement myths. In New Zealand, where lamb is raised on land that’s perfect for grazing, farmers do not need to buy feed for their livestock. But in Britain the pastures are poor and the animal’s diet must be supplemented. One analysis found that for buying meat in the UK, it was four times more “green” to buy the New Zealand lamb.

Agriculture is a high-emission practice, responsible for about ten percent of all greenhouse gas emissions in America (and it’s even higher in other countries). Production costs like running tractors or other heavy equipment contribute heavily to emissions rates, as do climate control environments that allow crops to grow outside of their ideal habitat or out of season. However, genetic engineering can help address many of these problems.

Many labs and companies are developing GMOs that can withstand climates in which they don’t naturally grow in. Consider the banana which needs 80-100 inches of rainfall and an average temperature of 80 degrees during the nine to 12 month harvest. For this reason, the bananas cannot be grown far from the equator without using greenhouses that produce emissions. However, genetically engineered bananas (that already exist for nutrient enhancement and disease resistance) could produce variteities of bananas that could be grown locally in a variety of climates.

Current traits in development allow plants to survive during drought or maximize their available water use. Other traits allow crops to grow in hotter or colder environments and on farms where soil quality is poor. Some traits reduce the need for nitrogen-based fertilizers, which cuts nitrous oxide emissions. Herbicide-tolerant crops also have allowed many conventional farms to switch to no-till farming, a technique that has been shown to significantly reduce emissions.

Embracing these next generation GMOs would revolutionize the local food movement, allowing more crops to be grown locally without drastic and environmentally deleterious methods. But would the foodie movement accept them? The data show buying local does not significantly help the environment. Genetic engineering can help, but there is resistance; the movement is culturally tethered to the organic movement (even if not all local farmers grow organically), so embracing GMOs is probably out of the question for now. If this is the case, the local movement will reveal itself to be more about appearing like you are doing something good, as opposed to actually doing something good.

A version of this story originally appeared on the GLP on March 13, 2017.

Nicholas Staropoli  has an M.A. in biology from DePaul University and a B.S. in biomedical sciences from Marist College. Follow him on Twitter @NickfrmBoston