Why neonicotinoid pesticides don’t deserve a ‘deadly to bees’ label

This article or excerpt is included in the GLP’s daily curated selection of ideologically diverse news, opinion and analysis of biotechnology innovation.
In 2014, the European Union banned the use of all neonicotinoids (“neonics”) in agriculture for two years. Many environmental non-government organizations (NGOs) like the Natural Resources Defense Council have been lobbying and exhorting the US government to follow suit. The EU, NRDC and other advocates claim the class of pesticides is responsible for deaths of honeybees.

Some groups even suggest the future of the planet is at stake. According to a recent fundraising appeal from the NRDC, which included a “letter of protest” to then-EPA administrator Gina McCarthy;

I am calling on you to impose an immediate ban on all uses of neonics that pose a risk to bees and other pollinators.
Bees support a wealth of natural ecosystems, and rely on them to pollinate more than 70 percent of our leading crops. We must now allow our food supply to be jeopardized simply because your agency refuses to proper assess the risks associated with bee-killing pesticides. 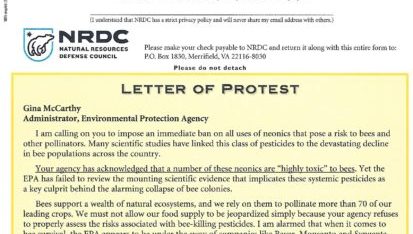 Setting aside the fact that the 70 percent figure is a gross exaggeration, other evidence also shows that neonics are not the chief culprit behind bee deaths. The EU ban on neonics, now lifted, showed no effect on bee populations in Europe (though critics are pushing for another ban.) In fact, the UN FAO pointed instead to weather and other issues for a decline in bees before 2014 (a decline that was a statistical blip, it turns out, since bee populations have been increasing worldwide since 2008).

They don’t. A study by researchers at the USDA and Mississippi State University showed that neonics do not necessarily deserve to occupy the podium of “most bee-deadly” pesticide alone, particularly when observed under realistic conditions (i.e., the way farmers would actually apply the pesticide).

The study, published in the Journal of Economic Entomology, showed the effects of 42 foliar (applied to leaves by spraying) pesticides on bees. The researchers compared field use rate per acre, and field use concentrations as well as the lethal concentration of each pesticide. Looking at one herbicide (glyphosate) and one fungicide and 40 insecticides, the researchers found 26 insecticides that killed more than 99 percent of bees exposed during spraying.

These 26 included common organophosphates as well as neonics. Three pesticides killed less than 1 percent of bees. These included glyphosate, a miticide and another neonic, acetamiprid. This neonic is worth noting because its lethal dose is well known, and far below the lethal doses of its neonic cousins, thiamethoxam and clothianidin. So, not all cousins — even neonic ones — are alike. 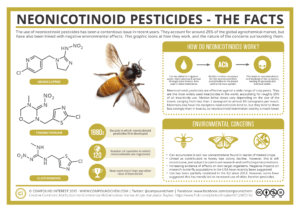 The study, because it used field applications as well as lethal doses, had a few surprises. First, four pesticides (methoxyfenozide+spinetoram, carbaryl, indoxacarb, and 1-cyhalothrin+chlorantraniliprole) had been considered moderately toxic to bees, but were found with higher risks when studied in field-realistic applications. Second, sulfoxaflor, an insecticide which had been EPA-approved but had that approval overturned by a US Appeals court, turned out less toxic than permethrin, a pyrethroid insecticide used in agriculture and household pesticide products.

In other studies, the Mississippi State team has looked at the use of neonics as they are applied to seeds, and have overall determined that this use of neonics poses a very small risk to bees. This is because “neonics are systemic, which means they move through the plant as it grows from seed into seedling. But the insecticide is not permanently present in the plant,” said Angus Catchot, a MSU entomologist. Research there also has shown that neonics are not present in nectar or pollen of the three major rows crops in Mississippi and the Deep South: Cotton, soybean and corn.

These changes in field applications from sprays to seed treatments, as well as a move away from organophosphate and carbamate sprays, have raised questions of the usefulness of regulatory exclusions focused solely on neonics. Genetic modification of soy, corn and cotton also have helped farmers direct their pesticide strategies to specific insects, reducing the need for sprays of more broadly (and deeply) toxic chemicals.

If such chemicals as neonics are broadly banned, then the remaining pesticides left for farmers to use will be the organophosphates, carbamate and pyrethrins that already are known to be deadly to pollinators.

A version of this story originally appeared on the GLP on June 14, 2017.

Andrew Porterfield is a writer, editor and communications consultant for academic institutions, companies and non-profits in the life sciences. He is based in Camarillo, California. Follow him on Twitter @AMPorterfield