Pests invade Europe after neonicotinoids ban, with no benefit to bee health

This month, more than 100 natural food brands, including Clif Bar and Stonyfield, joined together in a drive to encourage the Obama Administration to ban pesticides linked to bee deaths. The culprit, they say, is neonicotinoids, which is a class of chemicals commonly called neonics, introduced in the 1990s, that are mostly coated onto seeds to help farmers control insects.

“(Neonicotinoids) poison the whole treated plant including the nectar and pollen that bees eat – and they are persistent, lasting months or even years in the plant, soil, and waterways.” writes Jennifer Sass, a scientist with the National Resources Defense Council, which has been pressing the  Environmental Protection Agency to conduct a one-year review of neonics to determine if a ban is necessary. “Traditional best management practices for bee protection, such as not spraying during the day or on bloom, doesn’t work for neonics.” she claims.

Last November, the NRDC submitted signatures from almost 275,000 of its members urging EPA to respond to its legal petition to expedite the review of neonics.

While there are a number of factors contributing to the dramatic die-off of bees – both honey bees and native bees – there is now a wealth of science that demonstrates that pesticides are a big part of the problem. In particular, the neonic pesticides (imidacloprid, clothianidin, and others) have been linked to impaired bee health, making it more difficult for the colony to breed, to fight off disease and pathogens, and to survive winter.  What makes neonics so harmful to bees is that they are systemic — meaning they poison the whole treated plant including the nectar and pollen that bees eat — and they are persistent, lasting months or even years in the plant, soil, and waterways they contaminate. Traditional best management practices for bee protection, such as not spraying during the day or on bloom, doesn’t work for neonics.

Yet, as activists continue to campaign to get neonics banned, news from Europe, where a two-year moratorium went into effect last year, suggests that farmers are unable to control pests without them. Partly in desperation, they are replacing neonics with pesticides that are older, less effective and demonstrably more harmful to humans and social insects, and farm yields are dropping.

The European Commission banned the use of neonics despite the fact that the science community is sharply split as to whether neonics plays a significant role in bee deaths. The causes of CCD and subsequent winter-related problems have since remained a mystery—and a heated controversy.

Bees play an integral role in agriculture helping to pollinate roughly one-third of crop species in the US, including many fruits, vegetables, nuts and livestock feed such as alfalfa and clover. In 2006, as much as 80 percent of the hives in California, the center of the world almond industry, died in what was dubbed Colony Collapse Disorder (CCD). More recently, overwinter deaths of bees in the United States has hovered well above the 19 percent loss level that is common and considered acceptable, sometimes reaching as high as 30 percent. Europe has faced similar overwinter die-offs.

But there is no bee crisis, say most mainstream entomologists. Globally, beehive counts have increased by 45 percent in the last 50 years, according to a United Nations report. Neonics are widely used in Australia were there have been no mass bee deaths, and in Western Canada, where bees are thriving. Over the past past two winters, bee losses have moderated considerably throughout Europe and beehives have gone up steadily over the past two decades as the use of neonics has risen. 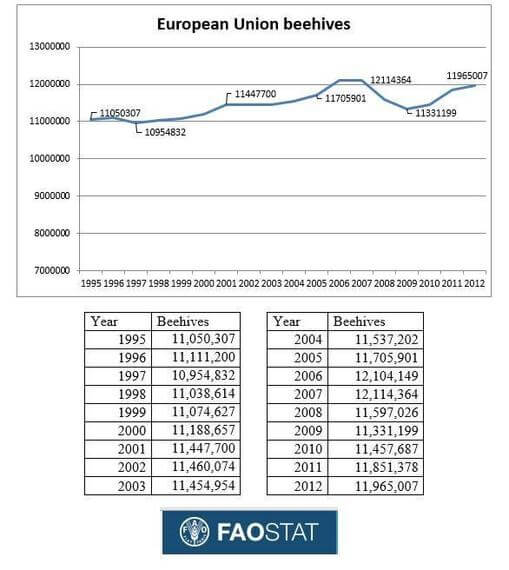 That did not stop the EU ban from being instituted. In North America, despite the 2006 CCD crisis, beehive numbers have held steady since the time neonics were introduced, challenging one of the central claims of environmental critics. 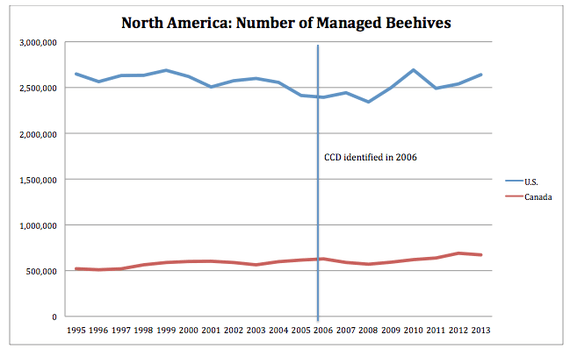 While many environmental activists, and some scientists, have coalesced around the belief that neonics as a likely culprit, most mainstream entomologists disagreed. May Berenbaum, the renowned University of Illinois entomologist and chairwoman of a major National Academy of Sciences study on the loss of pollinators, has said that she is “extremely dubious” that banning neonics, as many greens are demanding, would have any positive effect.

We know more now than we did a few years ago, but CCD has really been a 1,000-piece jigsaw puzzle, and the best I can say is that a lot of pieces have been turned over. The problem is that they have almost all been blue-sky pieces—frame but no center picture.

Last summer, President Barack Obama issued a memorandum asking agencies to address steps to protect pollinators, however, the report is not expected to be released until next year. The panel is being headed Illinois entomologist May Berenbaum. In a controversial move, the National Wildlife Refuge System announced a ban on both neonics and genetically modified organisms last August.

Related article:  Rethinking the pesticides–neonicotinoids–bee health crisis narrative: Why the media get it wrong

Cities, states and provinces in Canada, egged on by environmental activists, are beginning to act unilaterally. Ontario voted to ban the chemicals, as have several cities or counties, including Vancouver; Seattle, Thurston County, Wash.; Spokane, Wash.; Cannon Beach, Ore.; and Shorewood, MN. Oregon held a hearing recently to consider a policy that would limit neonics use.

While pressures on politicians increase, farmers in Europe say they are already seeing the fallout on crop yields from the ban–what many claim is a politically driven policy. This is the first season for growing oilseed rape following the EU ban, and there has been a noticeable rise in beetle damage. 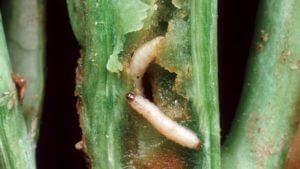 Last autumn saw beetle numbers swell in areas of eastern England and the damage from their larvae could leave crops open to other pest damage and lodging.

Ryan Hudson, agronomist with distribution group Farmacy, says that growers in the beetle hotspot areas are seeing some fields “riddled” with the larvae.

“They could do a lot of damage – arguably more than the adults because we cannot control them now and I think we will find out the true extent this season,” he explains.

Near Cambridge, England, farmer Martin Jenkins found flea beetles for the first time in almost a decade on his 750 acres of rapeseed (commonly called canola in the U.S.). He told Bloomberg:

When we remove a tool from the box, that puts even more pressure on the tools we’ve got left. More pesticides are being used, and even more ridiculous is there will be massively less rapeseed.

There is little growers can do now as the only option of tackling the larvae is an autumn spraying of pyrethroid, an older chemical phased out for multiple reasons, so they must now focus on stimulating growth.The infestation may cause a 15 percent drop canola yields in Europe this year and some areas are even worse off. Last fall, some canola fields in Germany were so damaged, farmers plowed them under and replanted winter cereals. Nick von Westenholz, chief executive of the UK’s Crop Protection Association, an industry group explained:

Farmers have had to go back to older chemistry and chemistry that is increasingly less effective. Companies would like to innovate and bring newer stuff, but the neonicotinoid example is not a tempting one.

Bringing new chemicals to market is expensive and takes time to move through the regulatory system. Meanwhile, canola farmers are spraying almost twice as much alternative chemicals from the class of pyrethroids, said Manuela Specht from the German oilseed trade group UFOP in Berlin.

This increased spraying with harsher chemicals may harm the honeybees, which the neonics ban intended to protect in the first place. . A 2014 study by researchers at the University of London found that exposure to pyrethroids can reduce bee size.

“There is a strong feeling among farmers that we are worse off and the environment is worse off,” said Kendall.