What makes something funny? Genetics almost certainly plays a role

Answer: Take down their genes.

Did you laugh at this little genetics joke? Even a little? No? Whatever your reaction, it appears safe to say that your own genes played a role.

What we find funny can differ wildly from person to person. And research on the genetics behind the sense of humor is somewhat limited. But scientists have identified at least one gene that seems to be associated with smiling and laughter in humans. And there is evidence, based on research in rats, that an individual’s reaction to tickling could have a genetic link. Still, there are clearly a lot of social and environmental factors that play an important role in how you determine what is and isn’t funny.

“There’s always an interaction between nature and nurture that shapes outcomes,” said Robert Levenson, a professor at the University of California Berkeley. 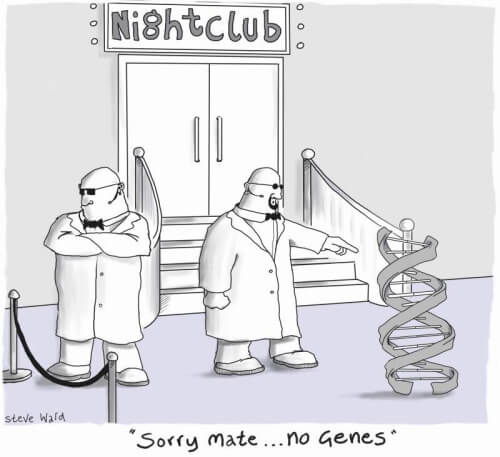 Levenson’s study linked smiling and laughing behaviors to the 5-HTTLPR gene, which is a serotonin receptor that has variants linked depression. He and his colleagues identified two distinct versions, or alleles, of this gene: short and long. The gene isn’t a “laughing gene,” but rather a gene that dictates an emotional response to different stimuli.

Study participants were asked to watch three different video clips, each with varying degrees of humor. The participants were recorded during each session and gave a DNA sample. Levenson and his colleagues found that people with the short allele had a tendency to laugh and smile more than people who had the long allele.

But they also found that people with the short allele were more likely to have a quick negative reaction – suggesting the gene plays a role in more than just a person’s sense of humor. That’s not surprising, considering that different kinds of humor — dry humor, sarcasm and slapstick routines — evoke different responses in different people.

Others suggest that sense of humor is a social tool that evolved alongside human language. Such was the argument made in a master’s thesis by Steven Légaré, an anthropology professor at Cegep Du Vieux Montreal in Montreal.

“[I]t was not until the evolution of language that verbal humor could be involved in the process of socialization. Such humor is impossible if we have little mastery of language,” Légaré said.

Genetics is intrinsically linked to evolution. So it seems safe to assume that with humor there are more genes aside from 5-HTTLPR at play that haven’t yet been identified. 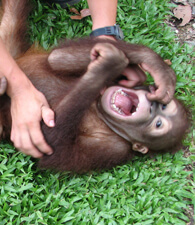 Both Levenson and Légaré agree there are many non-genetic traits involved in helping us decide when to laugh. The idea that sense of humor is tied to our social lives is backed up other research. Studies of chimps and rats, for example, found that tickling and laughter are important ways to interact and socialize with peers.

Scientists from the University of New Mexico suggest that sense of humor may have evolved as a tool in human mating. Their research shows that men who have a good sense of humor are more attractive to women, as it reveals the presence of desirable genes and good parenting traits.

The line of thought is backed up by researchers at the University of Stirling. Their study tried to determine which traits drew people into long- and short-term relationships. They recorded participants describing items they’d take to a desert island. Afterwards, a group of judges were asked to rate the video clips. The men who were deemed funny were often considered more attractive for short- and long-term relationships.

The idea was taken a step further by researchers at the Stanford University School of Medicine.

They recorded the brain activity of children, ages 6-13, who were shown video clips of funny and neutral responses. The girls’ brains showed more heightened activity when watching the funny clips than did the boys, suggesting humor might be a more important trait in the eyes of females.

But in this relatively undeveloped area of research, it seems clear that the factors influencing our sense of humor are complicated. While there is a clear genetic component, there are many things that factor into whether or not you laughed at that earlier joke.

A version of this article originally appeared on the GLP on January 30, 2017.

Elizabeth Newbern is a former contributing writer for the GLP. She has also written for GenomeWeb, Live Science, Audubon Magazine, and Scholastic. She received her MA in Journalism from New York University and a BA in Geology from Bryn Mawr College. You can follow her on twitter @liznewbern