This article or excerpt is included in the GLP’s daily curated selection of ideologically diverse news, opinion and analysis of biotechnology innovation.
The daily news reports about how agriculture is killing us are certainly alarming. However, when I carefully examine each report, the sensational headlines never seem to match reality. The claims originate usually from unpublished studies, or re-interpretations of legitimately published work where the conclusions have little to no relationship to the scandalous headline. 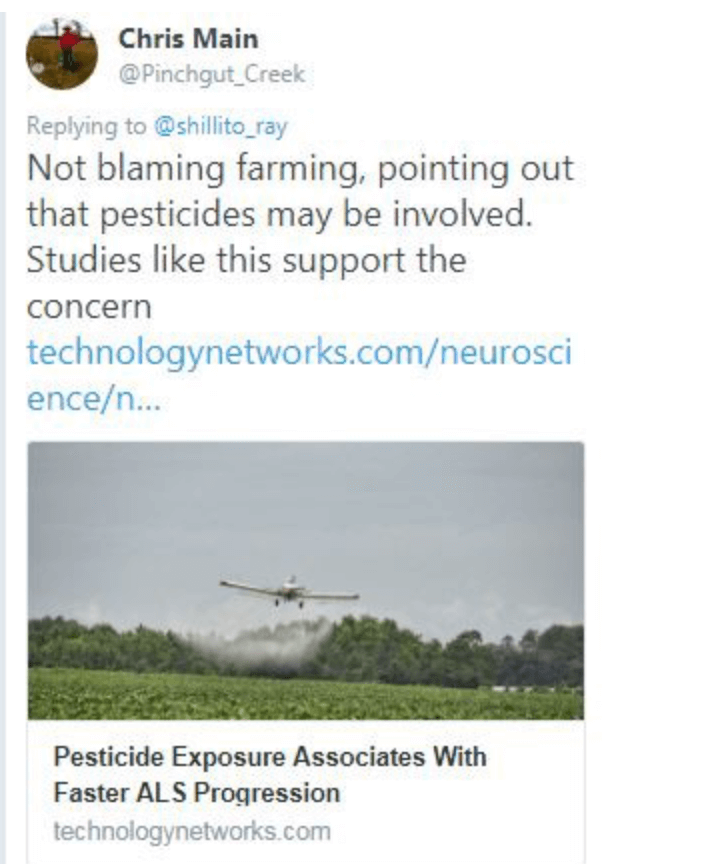 The latest example came to me via Twitter when I read the tweet to the left. [Editor’s note: the tweet referred to a University of Michigan news release that appeared on numerous media distribution sites, including Technology Networks.]

Are pesticides associated with amyotrophic lateral sclerosis (ALS; Lou Gehrig’s Disease) progression? Let’s take a look at the data and see what the authors found. The referenced study is here.

The authors analyzed 167 cases of ALS, measured blood levels of select compounds, and then monitored disease progression. The authors found associations between levels of specific organic compounds and the progression of disease.

But they were not pesticides, at least not anything used in a long, long time

In fact, the study did not even test modern-day pesticides. They examined the levels of components of chlordane (cis- and trans-nonachlor, and chlordane itself), a compound that has been banned since the 1980s. It was a reasonable idea to test for it, as it is environmentally persistent and its components are health hazards.

The researchers also examined levels of hexachlorocyclohexene (HCH) and Dichlorodiphenyldichloroethylene (DDE, the breakdown product of DDT). This made sense too, as these long-banned compounds are persistent chemicals that can be detected in those exposed, years after exposure. 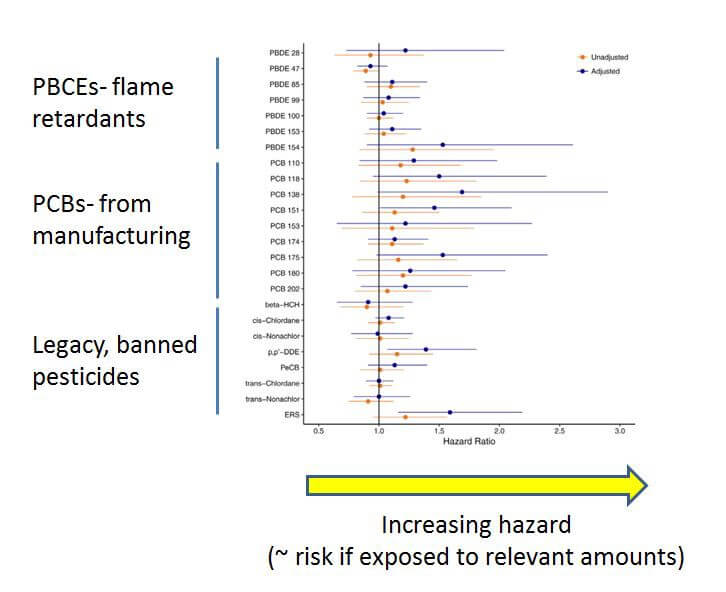 The figure above is a modification of Figure 1 from the study in question, Goutman et al. (2019). I added the classifications and description of the trend. The more potentially hazardous the compounds are, the more to the right the dot will be placed, and the x axis defines the strength of the association. For the pesticides examined, only DDT (as determined by its breakdown product p.p’ DDE) is associated with increased risk, showing a 1.39x higher mortality rate (95% CI 1.07 to 1.81). Good thing DDT has been outlawed for 50 years.

So where did the poster on Twitter get the idea that there was a relationship between currently-used pesticides and ALS? A click on the link takes you to this article: 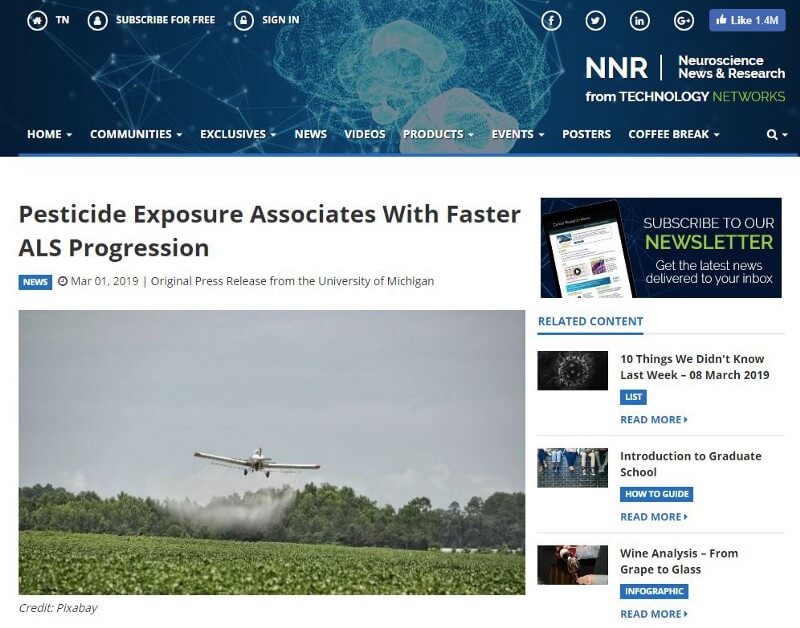 Neuroscience News and Research posted an article with a nice crop dusting picture, when the data did not support the headline. So where did this bad information come from? 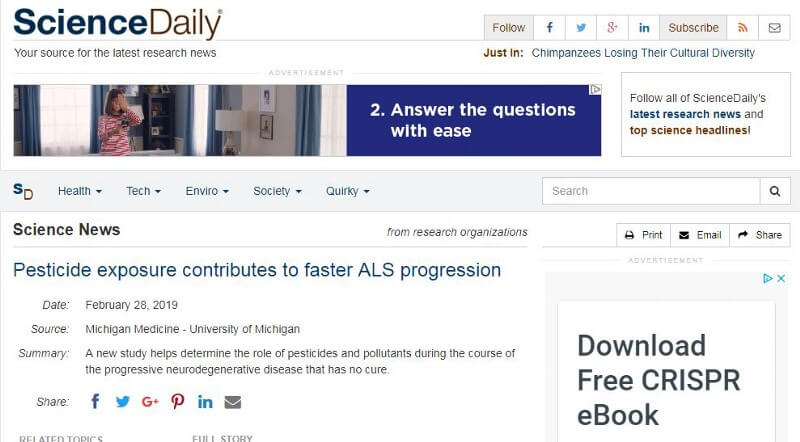 A website with “science” right in the name repeated this false information. Did anyone actually read the story before they posted it? How about Medical News Today? Did they get it right? Here’s a photo and a caption from the article. 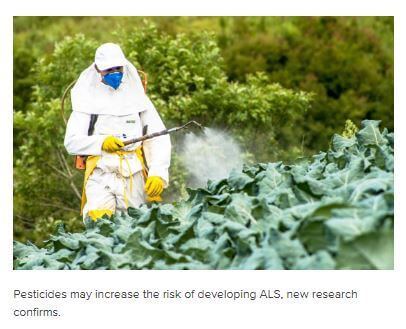 No, the caption actually contradicted what Goutman et al. (2019) reported. Did these reporters even read the article they reported on? Where could misinformation like this have possibly originated? Look no further than the university itself! 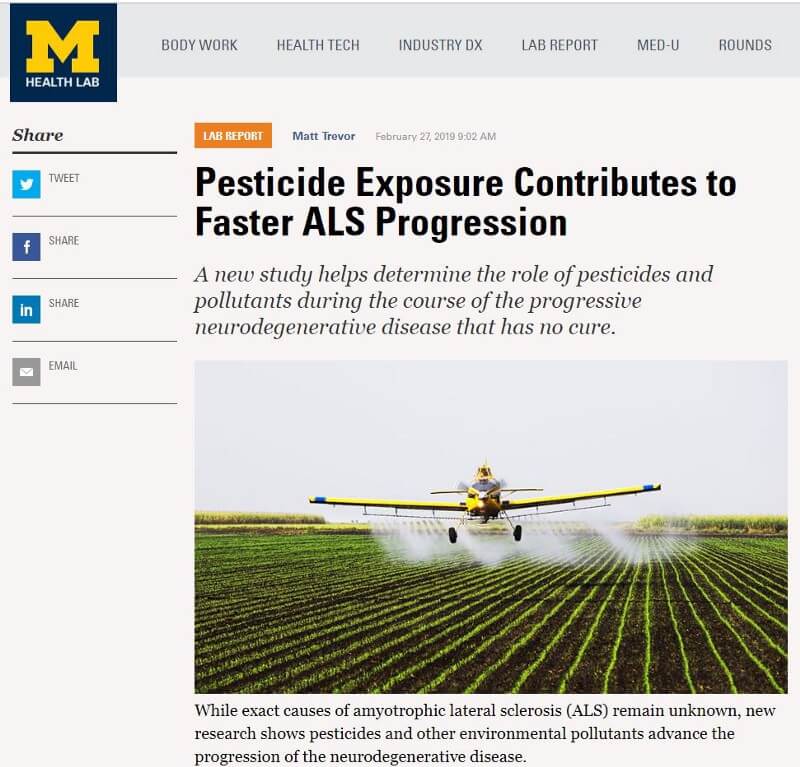 After reading the paper, it was clear that the conclusions did not match the title of the article, the photo, or the subhead. The article by University of Michigan Neurobiology Communications Director Matt Trevor did speak accurately to the findings of the study, then noted that Michigan is home to 69 Superfund sites, and that DDT was used until the middle of last century. That all made perfect sense and provided a good rationale to do the study and report the findings.

But why they say “pesticide exposure contributes to faster ALS progression” and show a picture of a modern-day aircraft spraying a field of crops? Because trashing agriculture and scaring people about their food gets clicks.

This was classic sensationalism to get traffic, and possibly lazy reporting. However, the body of the piece was reasonable—just the headline, subhead, and photo (the stuff that most people read) were completely wrong.

Science Daily and Neuroscience News and Research, then, perpetuated misinformation through trusted, scientifically vetted channels, adding a new bit of false information to the growing arsenal of activists who criticize the safety of modern farming.

And don’t think that a bogus interpretation will just go away unnoticed. 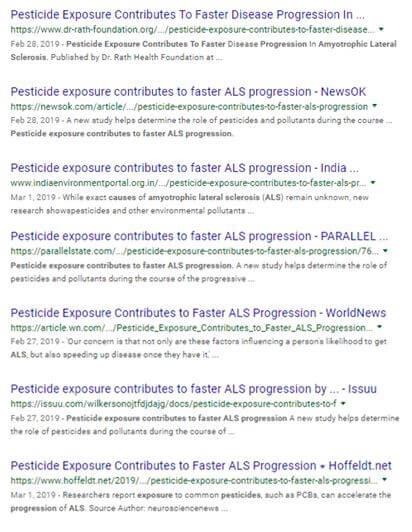 This situation reminds us again that scientists and farmers have a new role as watchdogs of the popular press and university communications offices. Oversteps and sexy headlines can be dangerous, as they misrepresent scientific research and further erode trust in safe food and farming.

[Editor’s note: As of the posting of this criticism on the GLP, the offending news organizations cited by Dr. Folta have not amended their stories or swapped out their misleading photos.]

Kevin Folta is a professor of horticulture at the University of Florida. He hosts the weekly Talking Biotech Podcast featured on the GLP. Follow him on Twitter @kevinfolta