This article or excerpt is included in the GLP’s daily curated selection of ideologically diverse news, opinion and analysis of biotechnology innovation.
The headline is not exaggeration or hyperbole. Scientific American just ran an article claiming that vegetables are becoming like sugary snacks and are toxic. And that’s not even the worst part.

The article was given the ridiculous headline “Broccoli Is Dying. Corn Is Toxic. Long Live Microbiomes!” It was co-authored by a marine biologist and a retired English teacher. As one might expect from the headline, the article makes one outrageous, unscientific claim after another.

The lies, distortions, and laugh-out-loud whoppers start early and often. Let’s dissect them:

This is the first sentence. Yes, that’s how this screed actually begins. Everything you eat is poison. How do we know? Because an organic food activist with no relevant scientific training or expertise says so.

Data going back to 1940, as reported by Eco Farming Daily, shows: “The level of every nutrient in almost every kind of food has fallen between 10 and 100 percent…”

In a Twitter thread, Dr. Elisabeth Bik commented that copper levels decreased (perhaps because copper isn’t used as much as a fungicide, anymore), but other nutrient levels are probably similar over time.

No. Thank nobody for multivitamins, which are a scam. Healthy people who eat a relatively balanced diet do not need dietary supplements of any kind. Besides, they are poorly regulated, which means just about anything can be (and is) detected in them. 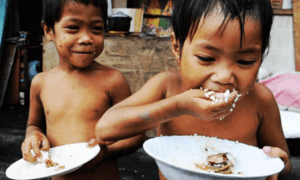 The idea that the nutrients in food will become too “dilute” is dubious to begin with. But it’s also based on two flawed assumptions: (1) Nutrient-poor crops like rice are the main nutrient source for poor people; and (2) Diets won’t change over time. #1 is untrue because, while impoverished regions do rely heavily on food like rice for calories, they rely on other things, like fish, to satisfy other nutritional needs. #2 is untrue because diets do change over time, especially as a country becomes wealthier.

Those are two dumbest sentences ever constructed in the history of the English language. Even if vegetables lost all their nutritional content, we should still eat them because they provide fiber. (I would argue that fiber is the primary reason to eat fruits and vegetables since much of our other food is fortified with vitamins.) Americans are chronically undernourished when it comes to fiber, largely because we don’t eat enough fruits and vegetables.

Plus, GMO corn is also engineered with genes that enable it to produce multiple insecticides in every cell… So, what does this mean for us? Well, because corn is in so many foods (corn syrups, oils, and products of corn-fed farm animals, etc.), we are often ingesting several toxins with each bite.

The Bt toxins engineered into corn target insects, not humans. This is well-known, well-established scientific fact. The authors’ claims are simply anti-biotech talking points with no basis in reality.

The epidemic of 20 chronic diseases—including diabetes, obesity, breast and thyroid cancers, stroke and autism—is highly correlated with the rise in production of “Roundup Ready” GMO corn and soy, both sprayed with glyphosate.

Obesity, cancer, and autism are caused by biotechnology? The authors got that claim from a paper published in the dubious Journal of Organic Systems, which according to Mark Lynas, “does not appear in PubMed, suggesting it is not taken very seriously in the scientific community.”

What’s the solution to all of these fabricated problems? Tinkering with the microbiome, of course, the latest go-to miracle solution for snake oil salesmen. Naturally, the authors quote one such snake oil salesman, Zach Bush, who peddles a supplement (for the modest monthly price of $49.95) that supposedly prevents toxins from leaking out of your gut — whatever that means. If you switch to organic, the Scientific American authors claim that you will rejuvenate your microbiome and decrease your risk of autism, cancer, infertility, and Parkinson’s disease.

It goes without saying that there isn’t a shred of evidence for any of that.

Believe it or not, those lies were just the most flagrant ones in the article. There were probably at least a dozen others. In my nine years in science writing, I’ve never before seen an article that so egregiously twisted and misrepresented a whole host of sciences — from nutrition and agriculture to biotechnology and microbiology. What an embarrassment for Scientific American.

Alex Berezow is a microbiologist and Senior Fellow of Biomedical Science at the American Council on Science and Health. Follow him on Twitter @alexberezow

This article originally ran at the American Council on Science and Health as Scientific American Says Vegetables Are Toxic, Sugary Snacks and has been republished here with permission.