Podcast: Food snobbery vs the Impossible Burger: A skeptical look at health claims about plant-based meat

Plant-based burgers have exploded in popularity over the last three years. Dozens of fast food restaurants and grocery stores around the US already offer these meat alternatives, and more are slated to hit the market in fall 2019. Because they so closely mimic the flavor and texture of ground beef and appear to exact a less severe environmental impact than animal agriculture, these products are poised to become a significant part of the American diet. But Impossible and Beyond burgers, the two most popular versions of plant-based meat, have drawn harsh criticism from anti-GMO activists, “foodies” and meat producers, who view “fake meat” as a serious threat to their interests.

Led by luminaries like ex-New York Times columnist Mark Bittman, “natural food” advocates have blasted Impossible and Beyond as “ultra processed,” and thus unhealthy. Typically harsh critics of each other, GMO opponents and meat producers have attacked the Impossible Burger because it contains “unknown” proteins that could pose a risk to human health. Moms Across America and other activist groups have also raised concerns about exposure to the weed killer glyphosate, since Impossible’s key ingredient is derived from herbicide-resistant soy. 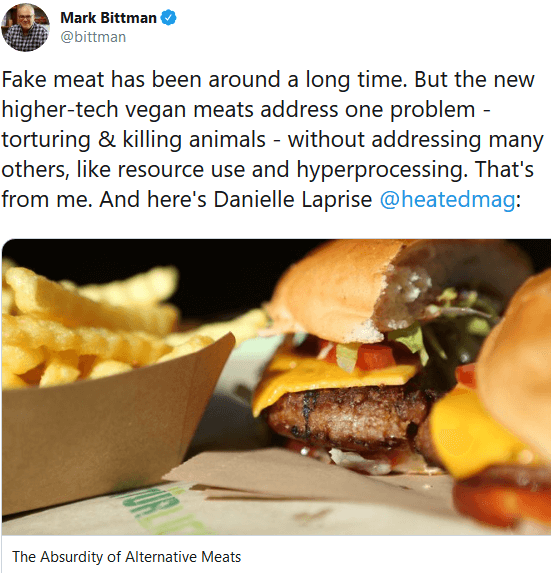 Breakthrough Institute deputy director Alex Trembath finds these complaints underwhelming. He argues that opposition to plant-based meat has no scientific basis and is rooted instead in food snobbery and distrust of corporations, with the meat industry tagging along to protect its economic interests. Critics, Trembath says, see plant-based meat as an impediment to remaking the entire food system:

I can’t help but notice that when fake meat was the purview of food utopians and visionary chefs, thought leaders were enthusiastically in favor of it. But as soon as fake meat hit the plastic trays at Burger King, they were fretting about how over-processed it was ….

If we can simply replace livestock production and its heavy environmental footprint with a technological alternative …. then all sorts of critiques of the system collapse …. Representatives from both the factory farming and organic beef sectors also …. fall back in some way on …. the idea that unprocessed, or unmodified, or pasture-raised (or not) are the more natural form of beef production and therefore the superior one. (That and, presumably, because it stands to eat away at their market share over time.)

On this episode of Biotech Facts and Fallacies, Trembath joins GLP editor Cameron English to examine the case against so-called “fake meat,” challenging critics to be honest about their motivations and offer a more substantive analysis of the nutritional and environmental impacts of these products.

Alex Trembath is Deputy Director at the Breakthrough Institute, a California-based think tank advancing technological solutions to environmental challenges. His writing has been published by Slate, the San Francisco Chronicle, Forbes, Politico and Bloomberg. Follow him on Twitter @atrembath

Podcast: Epidemiologist Geoffrey Kabat explains how junk science gets published—and how to spot it in the headlines

Podcast: How technology keeps cancer-causing mycotoxins out of our food

Podcast: What Doctor Who can teach us about protecting California’s grape industry from ‘alien’ bugs