This article or excerpt is included in the GLP’s daily curated selection of ideologically diverse news, opinion and analysis of biotechnology innovation.
The increasing popularity of organic food is driven largely by consumers hoping to avoid pesticide exposure. When the Soil Association, a UK-based organic advocacy group, asked consumers why they didn’t buy conventional foods, 95 percent of them said they did so because of pesticides. Despite the fact that organic growers do indeed utilize pesticides — some of which can be very harmful to human health and wildlife — the organic food movement has done its utmost to promote the myth of chemical-free “natural” agriculture, contrasting it with the idea that conventional farmers rely on a bevy of “toxic” substances to grow their crops. Organic Consumers Association (OCA) International Director Ronnie Cummins summed up this false dichotomy in a 2014 article for EcoWatch:

[Editor’s note: This article is part three of a four-part series on the organic food industry’s reaction to the introduction of gene-edited crops. Read part one, part two and part four.]

Although synthetic pesticides are generally not allowed in organic farming, “natural” substances that control pests are not only permitted but required, because bugs will eat organic and conventional crops without hesitation. Cummins doesn’t include that important clarification, though the problem with his argument isn’t so much the sleight of hand but that it’s at complete odds with reality. 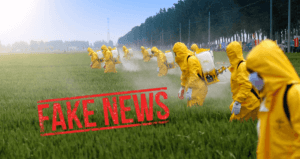 As crop biotechnology continues to advance, conventional farmers are gaining access to new tools that drastically cut pesticide use. This downward trend in chemical dependency goes back to the introduction of genetically modified (GM) crops in the 1990s, and will only accelerate as more gene-edited crops and animals reach the market in the near future. The organic industry, meanwhile, continues to sit out this sustainability revolution for ideological and economic reasons, which ultimately encourages pesticide use.

There is a common misconception that natural substances are inherently safer than the chemicals scientists synthesize in the lab, leading to the belief that synthetic pesticides used in conventional agriculture must pose an elevated threat to human health. The organic movement has found this misconception helpful in its crusade against modern farming techniques, even in the face of evidence that both synthetic and natural pesticides can be toxic. According to Charlotte Vallaeys, food and farm policy director at the Cornucopia Institute, a non-profit organic activist group:

There was just no way that truly independent scientists …. would ignore the vast and growing body of scientific literature pointing to serious health risks from eating foods produced with synthetic chemicals.

What the Cornucopia Institute seems less eager to discuss is the long list of USDA-approved substances that can be used in organic farming. Some of the products would surprise many organic food consumers, since these chemicals can be dangerous. Lime sulfur, for instance, is used to control fungi, bacteria and insects living in or dormant on the surface of bark of deciduous trees, which lose their leaves seasonally.

Lime sulfur solutions are highly alkaline and corrosive to living things; they can cause blindness through eye contact. Organic farmers growing apples and pears whose orchards are infected with fire blight can use peracetic acid to control infestation. Exposure to peracetic acid can cause irritation to the skin, eyes and respiratory system; high acute and long-term exposure can cause permanent lung damage. There have been cases of occupational asthma resulting from the use of peracetic acid. Boric acid powder can also be used in organic farming for pest control, as long as it does not come into direct contact with crops. It is poisonous if ingested and long-term exposure can cause kidney damage.

Copper sulfate can also be used in organic farming as a fungicide, and is extensively utilized in grape orchards. According to the EPA, “DANGER” must appear on the labels of all copper sulfate products that contain 99% active ingredient in crystalline form. Cornell University’s Toxicology Network summary of copper sulfate poisoning explains why that is:

Some of the signs of poisoning, which occur after 1-12 grams of copper sulfate are swallowed, include a metallic taste in the mouth, burning pain in the chest and abdomen, intense nausea, vomiting, diarrhea, headache, sweating and shock…Injury to the brain, liver, kidneys and stomach and intestinal linings may also occur in copper sulfate poisoning. Copper sulfate can be corrosive to the skin and eyes…Copper sulfate is very toxic to fish…Direct application of copper sulfate to water may cause a significant decrease in populations of aquatic invertebrates, plants and fish.

Copper compounds, including copper sulfate, are authorized in the EU as bactericides and fungicides, even though it is a substance of particular concern to public health or the environment, according to the European Food Safety Authority (EFSA). Copper compounds are candidates for substitution and their use is being phased out and replaced.

The organic food movement has a bigger problem than the obvious double standard it relies on to attack synthetic chemicals. Biotechnology has drastically cut pesticide use over the past 25 years. But since activists like OCA’s Cummins also oppose crop biotech, they have twisted themselves in knots trying to justify two clearly contradictory positions.

For example, one of the most common insecticides used in organic farming is Bacilllus thuringiensis (Bt), a natural bacterium found in the soil. Yet when Bt is spliced into a seed to create genetically modified corn, soybean, cotton and brinjal (a type of eggplant), the organic movement vehemently objects, claiming that these insect-resistant crops are dangerous to human health and the environment. Both claims have been thoroughly debunked by years of research.

Instead of criticizing GM Bt crops, the organic movement should be applauding their cultivation, which has led to a substantial reduction in the use of pesticides. Farmers in India who grow Bt cotton, for example, have seen their use of pesticides decline by more than 60 percent. A June 2019 study on the introduction of Bt brinjal in Bangladesh similarly noted the crop “provides essentially complete control of the eggplant fruit and shoot borer, dramatically reduces insecticide sprays, provides a six fold increase in grower profit, and does not affect non-target arthropod biodiversity.” Overall, GM crops are responsible for a 37 percent decline in pesticide use worldwide, and the widespread adoption of Bt technology has been an enormous part of that development.

Other biotech innovations are poised to cut agricultural pesticide use even more. New gene-editing technologies such as CRISPR may enable researchers to manipulate the genetics of insect populations to provide a chemical-free pest control method. University of California, San Diego researchers explored one possible approach in a January 2019 study:

Using the CRISPR gene-editing tool, researchers have developed a new way to control and suppress populations of insects, potentially including those that ravage agricultural crops and transmit deadly diseases. The precision-guided sterile insect technique (PGSIT) alters key genes that control insect sex determination and fertility. When PGSIT eggs are introduced into targeted populations, only adult sterile males emerge resulting in a novel, environmentally friendly and relatively low-cost method of controlling pest populations in the future.

Editing the genome of insects that damage important crops and fortifying the natural defenses of plants could allow farmers to markedly reduce pesticide use. CRISPR-edited apples can be protected against fire blight disease, for instance, without the use of peracetic acid. The organic food movement should welcome such developments, but it continues to oppose them because of scientifically unwarranted concerns that crop biotechnology might be hazardous to human health and the environment.

Ideological considerations, like extreme distrust of corporations, partially explain why anti-GM activists continue to perpetuate unfounded fears of genetic modification and mislead the public about the use of pesticides in organic farming. But economics offers some insight as well, as the organic food movement needs to justify the high cost of organically grown food. It does so by disparaging conventionally grown and genetically engineered crops by raising non-existent health and environmental concerns.

According to former Secretary of Agriculture Dan Glickman, “the organic label is a marketing tool. It is not a statement about food safety. Nor is organic a value judgment about nutrition or quality.” Such a fact is clear to anyone who takes the time to look at the evidence. Molecular biologist Louis Hom offers an important explanation of why many in the organic movement are so reluctant to acknowledge the veracity of Glickman’s uncontroversial statement:

For obvious reasons, organic farmers have done little, if anything, to dispel the myth that organic = chemical/pesticide-free. They would only stand to lose business by making such a disclosure.