Henry Miller | December 12, 2019
This article or excerpt is included in the GLP’s daily curated selection of ideologically diverse news, opinion and analysis of biotechnology innovation.

Did you catch the story about the swarm of 25,000 bees that had to be captured and removed (by a special police unit, no less) from the Staten Island Ferry Station in New York City?

After many years of media reports about honeybees and wild bees dying off, you’d think they were nearly extinct — so what were 25,000 of them doing at a ferry terminal in one of the world’s most densely populated cities?

Maybe they heard that New York was “all the buzz.”

Seriously, as I will explain, wild bee populations, like their honeybee cousins, are not endangered.

[Editor’s note: This is part two of a three-part series on pollinator health and pesticides. Read part one here.]

In the previous installment, I discussed the Pseudo-Scientific Method pursued by zealous environmental activists and their scientist enablers to promote the myth of a “honeybee-pocalypse.” I also analyzed how that campaign, which specifically targets state-of-the-art neonicotinoid pesticides (“neonics,” for short), misleads the public, corrupts science, and leads to flawed regulatory decisions.

Well, much the same is true for claims about the decline or imminent extinction of wild bees. Once again, disingenuous activists intent on banning neonics are wrong on the facts and, therefore, also on the policy.

Claims that wild bee populations are in peril and declining — specifically, due to the widespread use of neonics — have emerged over the last several years, as “progress” toward a ban on neonics, which seemed to be moving ahead in the European Union, stalled. The two-year “partial ban” adopted by the EU in 2013, though still in place despite its ostensibly temporary nature, had still not yielded the definitive, permanent prohibition sought by the activists.

The anti-neonic crowd had hinged its initial condemnation of neonics on their supposed dire threat to honeybees, but that presented a host of problems.

First, because honeybees are commercially raised, similar to livestock, and their hives have commercial value for honey production and pollination services, there was abundant information about their populations, as well as mechanisms for regularly collecting additional data. It’s hard to prove that a species is plummeting toward extinction when actual counts show that their numbers are rising.

Second, honeybees exist in hives, which function like “super-organisms” that collectively are able to achieve feats such as detoxification from limited pesticide exposures, whereas individual honeybees cannot. Consequently, laboratory experiments showing that neonic pesticides can poison individual honeybees tell us little about their actual, real-world effects on honeybee hives and colonies (groups of hives), which may contain 50,000 or more honeybees. These are the units that count — both in terms of commercial output and species survival.

Therefore, large-scale field studies were undertaken to determine the effects of field-realistic neonic exposures on honeybee colonies. They consistently showed no observable adverse effects at the colony level from field-realistic honeybee exposures to neonics. Those findings hardly support a catastrophe-in-the-making.

Further confounding basing the anti-neonic “narrative” on honeybees was the existence of more than two decades of research and experience, which demonstrated that the principal threat to honeybee colonies was well known, long before the introduction of neonic pesticides: Varroa destructor mites, which is a vector for at least five debilitating diseases, including RNA viruses such as the deformed wing virus (DWV).

It’s hard to convince even the most gullible and pliant regulators that the particular pesticide class you’re out to ban is causing imminent honeybee extinction when there’s ample evidence that the real cause is something else.  And then there’s the example of Australia, the only continent on Earth still free of the Varroa mite, but where neonic pesticides are widely used: Honeybees thrive there.

With complications such as these stalling the hoped-for, permanent neonic ban, something had to be done, so the activists went to Rule No. 8 of Saul Alinsky’s 1971 book, “Rules for Radicals”: “Keep the pressure on. Never let up.”  In other words, attack from all sides, never letting your target regroup or recover.

Cue the new scare: wild bees. They’re bees, after all, the anti-pesticide activists reasoned, so they must play some role in crop pollination. And if honeybees were supposedly in danger from neonic pesticides, wild bees must be, too, and scientific evidence of their state of health would be harder to come by. (That last point illustrates another of Alinsky’s rules: “Whenever possible, go outside the expertise of the enemy” — the point here being that it’s hard to prove a negative.)

Such deft reasoning was able to circumvent some of the limitations of the “neonics are decimating honeybees” narrative:

Thus, almost anything could be claimed about supposed harm to wild bees from neonic exposure. Who could demonstrate otherwise?

However, had the doomsayers cared to look more carefully into wild bees, they might have realized that what we do know about these species thoroughly undercuts their theory.

First of all, the vast majority of wild bee species, at least in North America, live in habitats — mostly deserts — where they never come near agricultural crops and risk appreciable neonic exposure. Most wild bees are “specialists” that feed on and pollinate a single wild plant species or a handful of wild (desert) plant types that bloom only once annually. The short annual lifecycle of these bees — hatching, foraging, mating, egg-laying, dying — is dictated by the typically short blooming season of the plant(s) on which they specialize. And their geographical range is typically very narrow — centered on the locale in which their target plants are found. For most wild bee species, in North America anyway, realistic scenarios for neonic exposure just don’t exist. 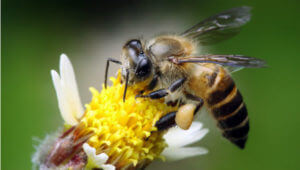 It’s small wonder, then, that a three-year study conducted by 58 scientists across five continents published in the journal Nature Communications in 2015 found that the wild bee species “that are the dominant crop pollinators are the most widespread and abundant species in agricultural landscapes in general.”  Significantly, those dominant crop pollinators, which represent only 2% of wild bee species, account for 80% of all crop visits by wild bees. And these wild bee species — which obviously face the greatest neonic exposure — are thriving.

Likewise, a 2013 study in the Proceedings of the National Academy of Sciences that analyzed U.S. native bee populations over a 140-year period found that of the 187 U.S. native bee species analyzed individually, only three experienced steep declines. All three of these were of the genus Bombus (bumblebees). Otherwise, “despite marked increases in human population density and large changes in anthropogenic land use, aggregate native species richness declines were modest outside of the genus Bombus.” Also, the genus Bombus is known to have suffered from pathogens introduced, in all likelihood, from managed bumblebee or honeybee operations.

The declines observed in individual wild bee species have been ascribed to three causes: disease, habitat loss and climate change — not pesticides (including neonics).

Various studies and articles — ranging from a study published in the Journal of Applied Ecology to a Sierra Club essay and a study published last June by researchers at the University of Vermont — have shown that there is spread, or “spillover,” of viral diseases from managed honeybees to wild bee populations. The University of Vermont researchers demonstrated that this comes from bumblebees foraging among flowers previously visited by infected honeybees.

Similarly, a 2015 article in Science determined that climate change is contributing to wild bees’ habitat loss — specifically for various bumblebee species in North America — but that the “effects are independent of changing land uses or pesticide applications.” Urbanization and other human development may also contribute to the loss of wild bee habitat.

There is further evidence that the “wild bee decline” narrative is just as flawed as the earlier “honeybee-pocalypse” claims. Evidence from studies in the United Kingdom and the Netherlands indicate that populations of particular wild bee species once considered to be in decline are now rebounding; at least up to a certain point, it appears that changing conditions can reverse adverse trajectories for wild bee populations.

Also, as a recently published analysis by Jon Entine shows, yields of agricultural crops that are the most dependent on wild pollinators are not declining, contrary to what would be expected if the wild bees that pollinate them were themselves becoming scarce. He underscores the illegitimacy of the wild bee scare:

“We can’t be simultaneously in the midst of a pollinator crisis threatening our ability to grow food and see continually rising yield productivity among those crops most sensitive to pollination.”

Entine gets the last word:

The real reason many advocacy groups stir the crisis pot on pollinators is to embolden their attacks on the use of pesticides, which farmers utilize to manage harmful insect infestations. … It is precisely the pesticides which the catastrophists are urging us to ban that, along with the many other tools in the modern farmer’s kit, have enabled us grow more of these nutritious foods, at lower prices, than ever before in human history.

Henry I. Miller, a physician and molecular biologist, is a senior fellow at the Pacific Research Institute. He was the founding director of the FDA’s Office of Biotechnology. Follow him on Twitter at @henryimiller

This article originally ran at Issues & Insights as No, There’s No Wild Bee-pocalypse, Either! and has been republished here with permission.