Viewpoint: GMO crops should become a bigger part of the food system if we want a sustainable society

Decades have passed since genetic engineering and agriculture were linked positively—in the media at least. We love the idea of a sustainable society but we detest the idea that leads to it. We talk of creating life on other planets but the lives on our own planet are suffering miserably.

Food insecurity and malnutrition are serious concerns across the globe. Over 796 million people out of a total 7.3 billion population are suffering from chronic undernourishment. And millions lose their lives due to inadequate consumption of basic nutrients. One of the major challenges before the food and agricultural industry is to develop and implement a sustainable system.

Our crops need to be genetically improved to withstand conditions like climate change, low water availability, rising soil salinity, and attacks by pathogens and insects.

We produce enough food for the entire planet. But over 800 million people still suffer from hunger. Why?

About 2.9 trillion pounds of food is lost per year. Let’s consider the “Non-GM, Conventional Potato”. Browning and bruising are common issues that lead to crop spoilage. They also affect its taste. Farmers discard these crops as they know supermarkets and other buyers won’t accept damaged crops. Other fruits and vegetables including apples and mushrooms go into waste because of their browning properties and not looking beautiful aesthetically.

If GMOs become a bigger part of our food system, we would be reducing the amount of food that goes into the waste. We would also save on water and reduce greenhouse gas emissions.

GMOs’ role in the agricultural industry has been an age-old debate and we haven’t been able to make much out of it. But the masses remain unaware of what GMOs are, their applications, and their advantages and disadvantages. So let’s begin with a small introduction.

All crops are genetically modified. We have been consuming them since humans started agriculture. Moreover, here’s the extent of genetic engineering present in our lives. 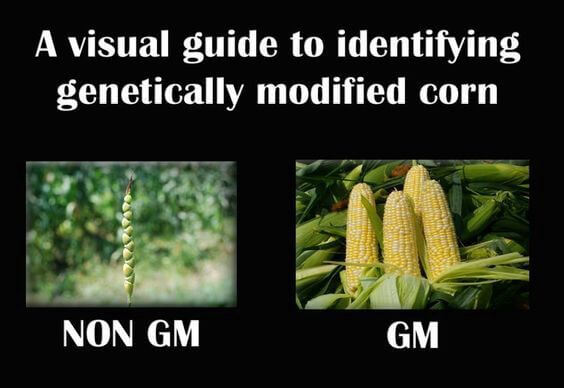 The only difference between a GM and Non-GM crop lies in the gene transfer technology used to create them. Both the methods involve changes in the DNA sequence or the order of genes. GM crops contain small and specific changes. But, the Non-GM crops contain thousands of uncharacterized genes.

The conventional breeding method involves mixing of both desirable and undesirable genes. The genes are then rearranged randomly in the genome of the offspring. Some genes are often lost in the offspring with this method of breeding. It is a long process taking up to 15 years to finally get a new variety of crop.

A genetically modified species is created using recombinant DNA technology. In other words, DNA molecules of different species are joined together and are then put into a host organism to either express a gene that doesn’t belong to the plant or to modify endogenous genes.The technology is employed to make crops drought-resistant, increase their resistance to extreme climatic conditions and towards insects and pathogens. New genetic combinations also add value to pharmaceutical, agricultural, food, and various other industrial sectors. 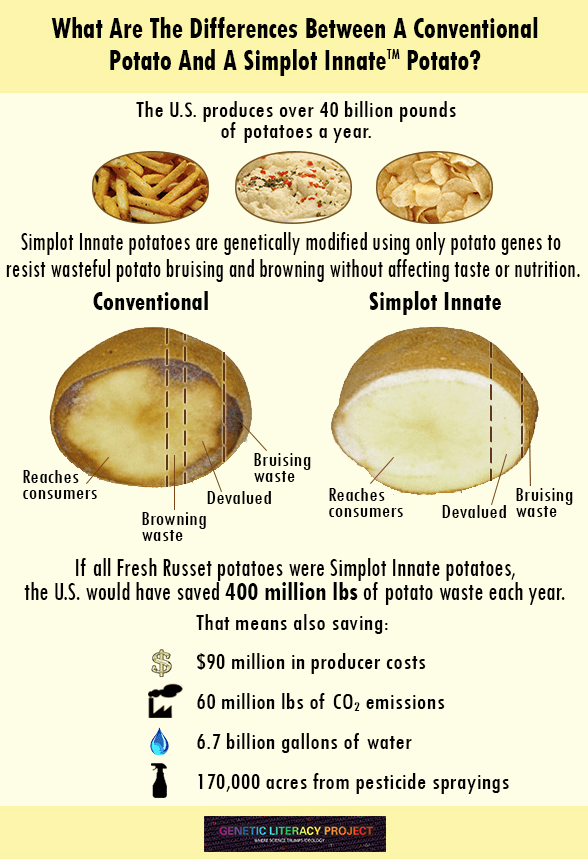 Take a second to realize how quickly the world is changing

What we fail to understand is that as the human population is growing, the quality of our surroundings is also changing. Upon comparing our lifestyle to that of our parents’ and grandparents’, all I see is a different form of surroundings. It is necessary to understand that we are using science to still have the things the older generations had and maybe better versions. And no it can’t be called “unnatural.”

Soil, salinity, extreme temperatures, water availability, the fertility of the land, everything that contributes to growing a crop is changing. While we are continuously updating ourselves to match today’s world, how can we leave out our crops? Do they not need an upgrade to withstand all these changes we often speak about?

Do we really have time to wait for 40 years to finally have a strain of wheat or strawberries or grapes or melons that can withstand powdery mildew, a fungal disease that affects these crops every year leading to acres of spoilage?

In the 1990s, Hawaii’s papaya industry almost collapsed as the papaya ringspot virus affected the crop population. Today, 80% of Hawaiian papaya available is genetically engineered to be ringspot virus-resistant. Until now, no organic or conventional breeding method has been identified to control the viral attack on papaya.

Herbicide-tolerant sugar beets are approved in Australia, EU, Japan, Korea, New Zealand. The products obtained from sugar beets are mainly refined sugar and molasses. The sugar produced from these GM beets is sucrose and it has the same chemical structure as the one that comes from non-GM sugar beets. 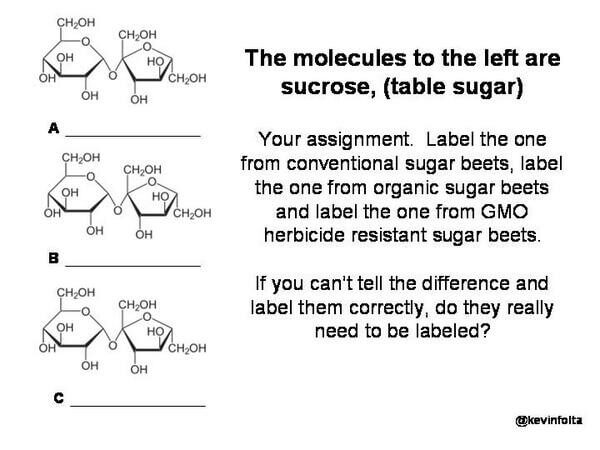 Genetic engineering reduces the time span of getting a specific trait into a crop. It means the farmers don’t have to wait for a decade or more to make their crops resistant to pathogens. Then again wait for the offsprings to have those desired traits. GM plants also give us higher crop yield and increased productivity to feed the ever-increasing population which in turn means more profits for the farmers too.

GM technology could help in producing crops that can combat malnutrition. People in developing countries rely on a single food crop for their entire energy intake and these often don’t meet the nutritional needs.

The Golden Rice Project is one such example. It was undertaken to reduce Vitamin A deficiency in kids, especially in poor countries. The aim of the project was to have rice enriched with β-carotene as humans can synthesize Vitamin A from it. But, Golden rice was attacked by the opposition for its taste instead of seeing it as a source of nutrition for already suffering kids.

A lot of claims made by anti-GMO organizations have little to no documentation to prove the toxic effects of GMOs on human life or on animals. Speaking of allergies, well if the crops are bred by the traditional method there could still be a possibility of it to be an allergen.

Examples often cited about GMOs causing certain allergies were a result of tests on the level of animal models. Well, if you don’t test it, how would you know? Why do we keep forgetting that only the products that have undergone several trials and phases get introduced to the general public? If a product is not working well on animal models, is it possible to introduce it to the masses? Do you think, regulatory bodies would pass off overlooking the results? 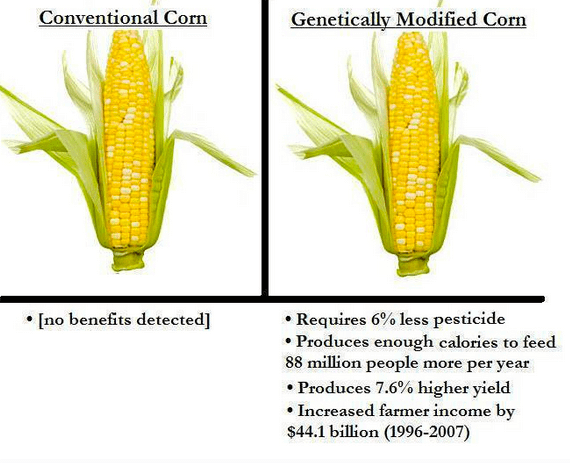 Give it a thought

If the same allergens were produced from conventional breeding, would they be going through tests before being introduced in the market?

With the aid of GM technology, we can reduce the level of allergens. For example, an allergen was identified in soybean and it was removed using genetic engineering.

We need to prepare ourselves to be in a position to feed the billions that are yet to be welcomed in our society. By introducing GM crops we are easing the load on our natural resources. If the crops are modified to grow on non-arable land we would be saving land to accommodate our growing needs.

Crop yields around the globe are affected by pathogens and insects. In developing countries, farmers cannot afford to have a proper irrigation system for their crops or buy chemicals to protect them. This often leads to poor crop growth and yield. Drought and salinity are expected to affect arable land. Thus, we need new technologies to secure our crops and make them stress-resistant.

For over 20 years humans and animals have been consuming GM food in one form or another. Whether it’s fructose syrup or canola oil, we are all doing fine. Let’s welcome it as an alternative for people who can’t afford high end labeled products. At least they can get the essential nutrition. We are not speaking of growing food for 100,000 people. We are speaking of the entire population, from cattle to our pets to humans. If this isn’t a step towards a sustainable future, what is?

Science is not a myth and if we all work towards understanding science rather than being scared of it, we can actually build a world where all of us have access to basic needs for survival.

This article appeared on the GLP on Oct. 30, 2017, after publication at Medium as “GMOs: Road to sustainable agriculture” and has been republished here with permission.

Eshna Gogia is a Business Developer at Helixworks, a synthetic biology company in Cork, Ireland. She holds a master’s degree in resource recovery and sustainable engineering and a bachelor’s degree in chemical engineering. Follow her on Twitter @eshna_gogia