Viewpoint: We can sustainably feed 10 billion people. Here’s how CRISPR and GMO crops can help

This article or excerpt is included in the GLP’s daily curated selection of ideologically diverse news, opinion and analysis of biotechnology innovation.
Agriculture is responsible for the production of a quarter of the total human-generated greenhouse gases. Growing food also uses about 70 percent of the water available to us. Moreover, agriculture (especially meat production) is the single most significant driver of deforestation and biodiversity loss. Food production is detrimental to the health of the planet — but it doesn’t end there. Once the food reaches plates, poor-quality diets cause malnutrition, claiming more lives than tobacco, drug and alcohol combined.

Search for malnutrition online and you will see pictures of frail and sick children. But along with stunting, wasting, vitamin and mineral deficiency, malnutrition also includes overweight, obesity and other diet-related illnesses. Yes, 1 in 9 people around the world go to sleep hungry, but nearly 2 billion adults are also overweight or obese. As such, more than one-third of the world population suffers from at least one form of malnutrition.

With the climate and biodiversity crises, and the global public-health crisis in the form of malnutrition, we must find a healthy and environmentally sustainable diet to feed the growing population. In 2019, the EAT-Lancet Commission brought together leading experts in nutrition, health, sustainability and policy to recommend ways to transform the global food system to achieve a healthy and sustainable diet. 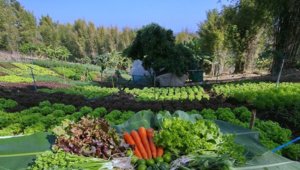 The EAT-Lancet report recommends that “planetary health diets” to feed 10 billion people by 2050 requires cutting down meat consumption by half and eating twice as much as fruits, vegetables, beans and nuts. Despite recognizing the need to make healthy food affordable for the poor, the EAT-Lancet Commission didn’t review the cost and affordability of the ideal diet. Therefore, in a recent global study, scientists reviewed prices for nearly 750 food items to calculate the value of healthy and sustainable diets in 159 countries.

The research, published in Lancet Global Health, shows that many people in low and lower-middle-income countries are too poor to afford EAT-Lancet’s ideal diet. EAT-Lancet says that we would need to eat twice as much as many fruits and vegetables, and get more protein and fats from plant-source foods. However, the new study found that fruits, vegetables, beans and nuts are the most expensive items of the ideal diet accounting for half of its total price.

A key challenge of the 21st-century is to change our food system to produce a healthy diet that is both economically and environmentally sustainable. As EAT-Lancet’s ideal diet isn’t affordable for much of the world’s low-income population, authorities must make several parallel interventions to tackle global food inequality.

Lower food prices and higher earnings would give poor people more purchasing power. We must also find cheaper, nutritious food alternatives that are affordable and accessible to people living in low-income areas. I believe that biotechnology has the power to lower the cost of locally and globally grown food, making the ideal diet economically viable to those that need it the most.

One problem is the lack of available, affordable options, which partly stems from decreasing agrobiodiversity. Just three crops (rice, wheat and corn) provide over half of the plant-derived calories worldwide. Shifting calories away from the starchy staple foods towards more nutritious fruits, vegetables and other protein-sourced food remains a significant challenge in meeting EAT-Lancet targets. Grand challenges require great technological solutions, and genetic engineering technology is among the most powerful tools at our disposal.

Biotechnology can improve agrobiodiversity and provide more locally-grown food options for people in low-income areas. One way to do this would be to make inedible plants into a good source of nutrition and calories. Take cottonseed, for example, which has the potential to be a cheaper alternative to nuts. Cottonseeds are highly nutritious, containing oils and proteins in abundance, but many low-income cotton farmers can’t eat cottonseeds because they produce toxins called gossypol.

Now, scientists have engineered cotton plants to remove the toxin, making cottonseeds safe for us to eat. And recently, the U.S. Food and Drug Administration approved genetically modified (GM) cottonseed for human consumption. Biotech cottonseed can act as an excellent alternative dietary source in low-income regions, where people struggle to meet the costs of the ideal diet recommended by EAT-Lancet.

Genetic engineering can also enable widespread cultivation of local plants. The groundcherry plant in its native form has a wild, sprawling growth habit which causes its fruits to drop to the ground while still small. Difficulties in cultivating the wildcherry mean it’s an orphan plant. However, scientists used genetic engineering to improve wildcherry’s undesirable traits, including the plant’s weedy shape, flower production and fruit size. Now there are hopes for large-scale cultivation of genetically engineered groundcherry, which is native to Central and South America.

Millions of children and adults around the world suffer from micronutrient deficiencies, and biotechnology can also help fortify current crops to improve their vitamin and micronutrient contents. For example, scientists have recently developed biofortified cassava, which has higher zinc and iron contents than regular cassava. The biofortified cassava may one day prevent illnesses related to iron and zinc deficiencies.

Golden Rice  is perhaps the prime example of a biofortified crop— conventional rice that is genetically engineered to produce the vitamin A precursor beta-carotene. Golden Rice, acting as a source of vitamin A, can address vitamin A deficiency that blinds and kills hundreds of thousands of children every year. After a rigorous biosafety assessment in the Philippines, the Department of Agriculture-Bureau of Plant Industry found Golden Rice “to be safe as conventional rice”. Golden Rice regulation application is under review in Bangladesh, as well. This biofortified crop can provide much-needed micronutrients, taking the everyday staple food further to meet people’s dietary requirements in the poorest regions of the world.

Improved agrobiodiversity and availability of local food varieties, enabled by biotechnology, will bring down the cost of the ideal diet, reducing food inequality. But GM technology also has the power to lift people out of poverty and increase the spending power of the low-income communities in developing regions.

Higher farm productivity, especially in low-income areas, can lower food prices. A meta-analysis of studies published after 1995 found that adopting GM technology has widespread benefits, including economic gains for farmers that grow GM crops. The meta-analysis found that GM technology increases crop yields by 21 percent. Some GM crops are engineered to be more resistant to pest damage, which helps achieve higher yields, for example.

The meta-study also found that GM crops require 37 percent less pesticide, which reduces pesticide costs by 39 percent and helps spare the environment. Even though GM seeds are more expensive than non-GM seeds, savings in pest control and pesticide use mean that farmers adopting GM crops enjoy 68 percent more profit. Therefore, GM crops can increase farmers’ spending power, which is excellent news for the quarter of the world’s working population employed in agriculture . More importantly, the yield and profit from GM crops are higher in developing countries than in developed countries.

If adopted widely, genetic engineering technology will bring us closer to meeting the EAT-Lancet dietary targets, which will help us protect the environment, public health, and reduce inequality.

Rupesh Paudyal holds a PhD in plant science and covers agriculture and the environment as a freelance writer. Visit his website and follow him on Twitter @TalkPlant