This article or excerpt is included in the GLP’s daily curated selection of ideologically diverse news, opinion and analysis of biotechnology innovation.
Protein powder made from thin air? We’ve heard of animal-based proteins, plant-based proteins and cell-based proteins, but now it’s time for air-based proteins! Solar Foods found a way to reverse carbon emissions by pioneering a protein with carbon dioxide and renewable electricity. This is a feat with potential to address sustainability and world hunger concerns alike. But how feasible is this protein?

Wait, what is Solein, you may ask? Well, to put it in its most basic terms, it’s a protein-rich powder made from carbon dioxide-eating bacteria, and with just a touch of space dust. Put it all together, and poof, you have a bland compound that can be mixed with practically anything to give it substantive nutritional value – and with all essential amino acids, to boot! But that’s just the beginning.

A Stellar Feat for Protein

We know most good things come from the land, but the idea for this protein began in space! Based in Finland and founded by CEO, Dr. Pasi Vainikka and his colleagues, Solar Foods got its start in 2017 from VTT, a Finnish research institute. 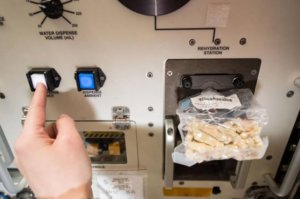 The original intent of the project was to provide a continuous supply of protein for astronauts en route to Mars in the NASA space program. From there, the founders further refined their process at VTT and the Lappeenranta University of Technology. Completely disconnected from agriculture, Solar Foods plans to feed the world while also reducing carbon dioxide emissions.

Solar Foods has a vision to solve the world’s food crisis beyond agricultural limitations. Dr. Vainikka and his team found a way for bacteria to eat CO2 instead of sugar, thus completely changing the dynamic of protein conversion. Another factor that makes Solein wholly unique? This protein source is devoid of any agriculture involvement – no arable land, no irrigation…no problem!

Solein, a complete protein, is created from the combination of a proprietary bacteria, CO2, water, and electricity. The fermentation process is entirely natural and similar to the production of yeast. But instead of sugars, their unique microbes consume CO2 and hydrogen for energy via water electrolysis, a process of splitting water cells using electricity. Other nutrients are added, too, such as potassium, sodium, and phosphorus. 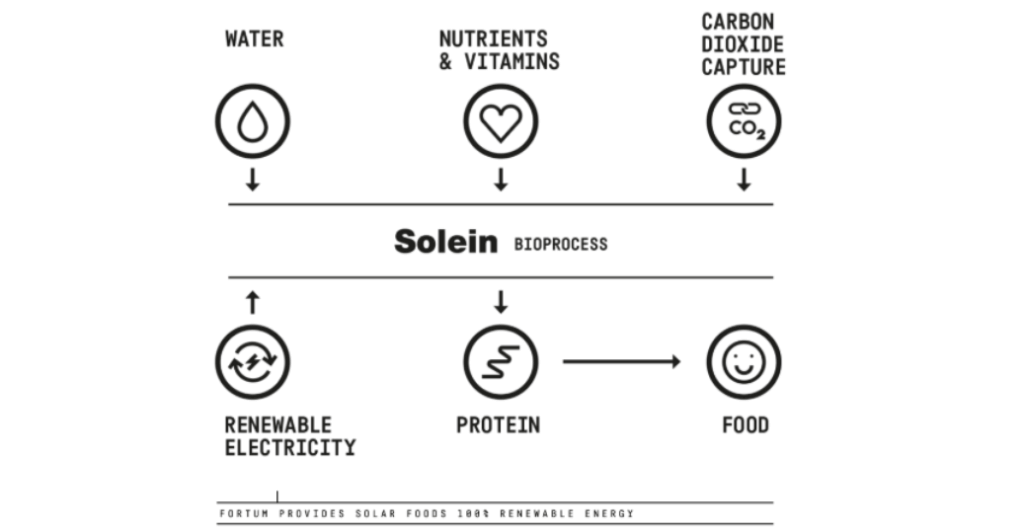 All this occurs in a bioreactor, from which the team must continually remove the liquid that the process creates. Once the liquid dries, what remains is the elusive Solein powder. Currently, Solar Foods produces about one kilogram, or 2.2 pounds, of Solein per day.

You may be wondering what this airy powder might look like. Well, it looks like wheat flour – quite a nondescript ingredient. But with its nutritional profile of 50% protein, 20-25% carbs, and 5-10% fat, it has a slightly savory taste that’s similar to eggs. Despite this unctuousness, the product is also vegan.

With a versatile texture and profile, you can expect this product to be in almost anything and everything, from shakes to cultured meat in the coming years. Given its malleable consistency, Solein protein powder can be used as an added ingredient in yogurts, breads, drinks, and pasta. Not much different than a protein powder we may use in our shakes, but with fewer ingredients and demanding fewer natural resources.

Solein can also contribute to the dizzying array of alternative meats, making these products even more protein-dense while keeping the mouthfeel intact. It can even be 3D-printed to give it a more textured look and feel. And because Solein has all of the essential amino acids, it can feed cultured meat cells in lab-grown environments.

Perhaps the most compelling part of Solein is that there’s no limit to the supply. Solein can even be produced anywhere a lab can be sustainably built, including on land where conventional protein production has never been possible – like deserts and the Arctic.

Also compelling? Instead of adding to greenhouse gases, Solein actually consumes carbon dioxide. Moreover, Solein is produced by using renewable electricity such as hydropower. And given its lower energy demand, this process can be adapted for other alternative energy sources, such as solar or wind power.

And there’s no need for arable land or irrigation, either. Dr. Vannika states that Solein is “completely” disconnected from agriculture. The soil microbes used for their proprietary bacteria only require collection from natural land just once. From there, the microbes are grown in a lab, and the inorganic nutrients they use are obtained from mineral deposits that don’t require the use of fertile land.

Solein is reported to be at least 100 times more climate-friendly than any animal or plant-based alternative. And unlike conventional protein production, which can use over 2,000 gallons of water to produce 1 pound of meat, Solein only needs just over a gallon of water.

Furthermore, Solein is 10 times more efficient than soy when measured by protein yield per acre.

With a pilot lab already underway, Solar Foods appears to have an aggressive roadmap for their planned global commercial launch in 2021. The first factory producing Solein is scheduled to open at the end of 2021, producing 50 million meals per year, scaling up to two billion meals by the end of 2022.  Their picture on their slide show would be good here.

Solar Foods plans to price Solein powder between $8 and $11 per kilogram, which Dr. Vainikka hopes will compete with current plant- and animal-based proteins. Though this price seems reasonable to us consumers, keep in mind this pricing is for food producers that will integrate Solein into their product line. They will then sell their end product to consumers, so the price by that point will most likely be higher than conventional protein sources, or at least initially.

Can this really work?

But our tastes and purchase patterns have everything to do with the long-term success of a product like this. With all the hype and media attention, it’s easy to see Solein as an answer to many of our global woes. But some consumers may have a hard time eating a lab-grown protein like this, as we don’t like the thought of our food coming from anything other than a farm or garden, no matter how eco-friendly the product.

And some critics find the scalability of this powder unachievable:

“This is a technological marvel, perhaps, but it’s not a food system,”

At one kilogram per day, Solar Foods’ low production yield concerns food expert Peter Tyedmers, a professor in the School for Resource and Environmental Studies at Dalhousie University in Nova Scotia. He doesn’t believe Solar Foods can even begin to dent the production yields of our current agricultural system. And even if yields were impactful, the price for Solein would still be too high to decrease global hunger levels.

But should large-scale production be feasible, a product like Solein would be a feat for humankind. And it will take all kinds of protein sources to feed our growing population: plant, cell-based, air-based and animal proteins alike. Ingenuity, technology, and innovation are the key to our future. The key component will be getting consumers on board with eating alternative protein whether it is made in a lab or grow in a feedlot.

This “miracle” protein powder has the potential to significantly impact our efforts to feed a growing population. However, scalability and affordability concerns will need to be assessed before we can extrapolate its effect on world hunger. Furthermore, its effect on our global food system also depends on consumer tastes and adoption, no matter how incredibly eco-friendly the product is. But Solar Foods’ game-changing technology will surely change the future of protein production.

Hillary Kaufman covers food trends and technological advances in health for Dirt-to-Dinner, a site dedicated to helping you better understand how your food is grown