Agricultural abundance is a pillar of the California dream. In 2016 the state turned out more than US$45 billion worth of meat, milk and crops. Long before nutritionists agreed that fresh fruits and vegetables should be the center of American diets, California farmers had planted much of their land in these products, and today they produce half of the nation’s fruits, vegetables and nuts. ut although fruits and vegetables are vaunted as healthy foods, their impact as crops is quite different. On many California produce farms wages are low, working conditions are poor, and farmers use enormous quantities of pesticides and precious water. This is the central contradiction of California agriculture.

For the past five years I have been studying California’s strawberry industry, which currently is the state’s sixth most important commodity in terms of the value of crops sold. Strawberries are attractive, reasonably nutritious and occasionally tasty fruits and can be grown and eaten within California nearly year-round. But the industry’s growth has relied on heavy use of toxic chemicals and now growers face heightened restrictions on some of their most favored chemicals: soil fumigants. Unfortunately, less toxic or non-chemical strategies that would allow strawberries to be grown for a mass market, maintaining affordable prices, are elusive and likely to remain so. 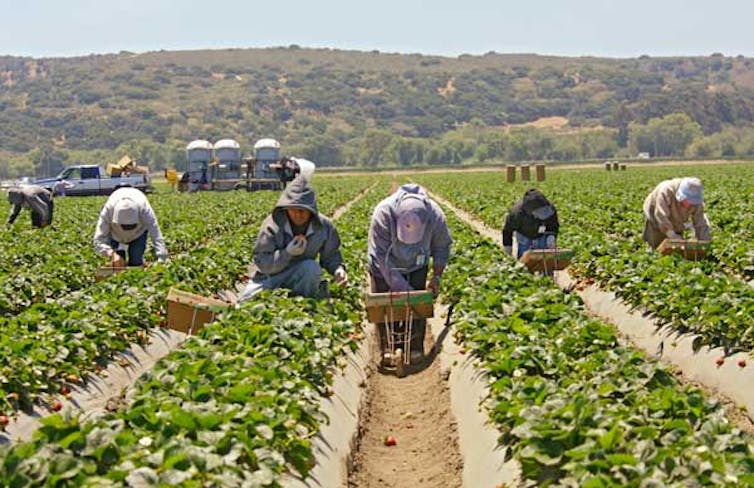 Although strawberry production once was scattered throughout the state, by the 1960s it had concentrated in coastal zones to take advantage of sandy soils and mild temperatures. Thereafter, the industry saw tremendous growth in productivity. In Monterey and Santa Cruz counties alone, acreage more than tripled and production increased tenfold from 1960 to 2014. Much of this growth was enabled by advances in plant breeding and use of plastic tarps to absorb heat, allowing growers to increase the length of strawberry seasons.

But the main driver of growth has been the use of pre-plant chemical fumigants. Growers hire pest control companies to fumigate soils before planting strawberries in order to kill soil-borne pests – most importantly, plant pathogens such as Verticillium dahliae and Macrophomina phaseolina. Without such treatment, these pathogens cause strawberry plants to wilt and die.

Now, however, the industry’s fumigant of choice – methyl bromide – can no longer be used in strawberry fruit production. In 1991 methyl bromide was banned under the Montreal Protocol on Substances that Deplete the Ozone Layer. The United States was supposed to phase out use by 2005, a deadline that was extended to 2015 and didn’t really take effect until two years later. Even so, this toxic chemical can still be used in nursery production to ensure that starter plants are virus- and pathogen-free. 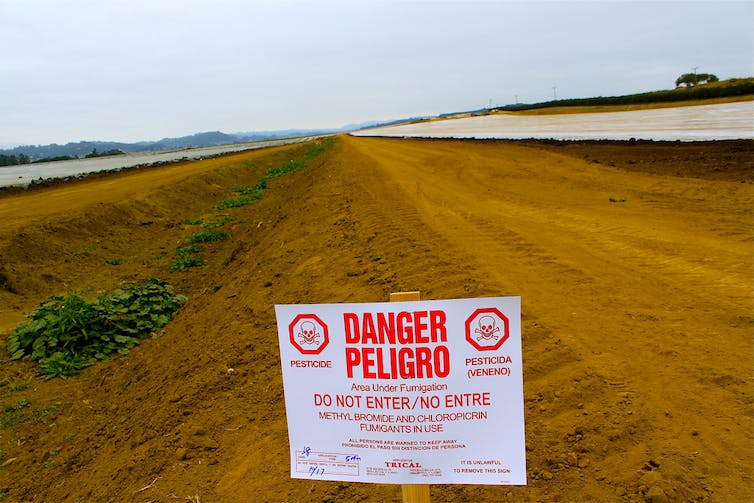 One potential replacement, methyl iodide, was approved for use in late 2010. But it was withdrawn from the market in 2012, following an activist campaign and lawsuit that accused California regulators of performing an inadequate review of potential health risks to workers and the general public. Among other things, the chemical is a known neurotoxin and carcinogen.

Other fumigants are still allowed, but their use is increasingly restricted by buffer zones and township quotas. Consequently, growers are contending with heightened levels of plant disease, some from pathogens that had never before been evident in California strawberry fields.

Can California find a less toxic way to raise 90 percent of the nation’s fresh strawberries? Although the strawberry industry is investing significant resources into non-chemical alternatives to manage soil-borne disease, the obstacles are formidable. The entire production system, including reliance on fumigants, is embedded into the cost of land.

Related article:  Viewpoint: Here's why we don't have to worry about a world without insects

Fumigation has allowed growers to plant on the same blocks of land, year after year, and not worry about soil disease. With fumigation available to control pathogens, strawberry breeders have emphasized productivity, beauty and durability rather than pathogen resistance. Meanwhile, nursery production has shifted away from prime fruit growing regions along the coast to take advantage of different environments for plant propagation, enabling coastal land to be used solely for growing fruit.

Together these innovations have allowed growers to keep prime strawberry land in production every year for much of the year, yielding exceptional amounts of fruit. High land prices reflect these expectations and make it unprofitable to grow strawberries using less intensive methods. The Pacific Ocean’s natural summer air-conditioning is attractive to suburbanites as well as strawberries, so coastal development is putting additional pressure on the cost of strawberry land while at the same time increasing public pressure to control use of fumigants. 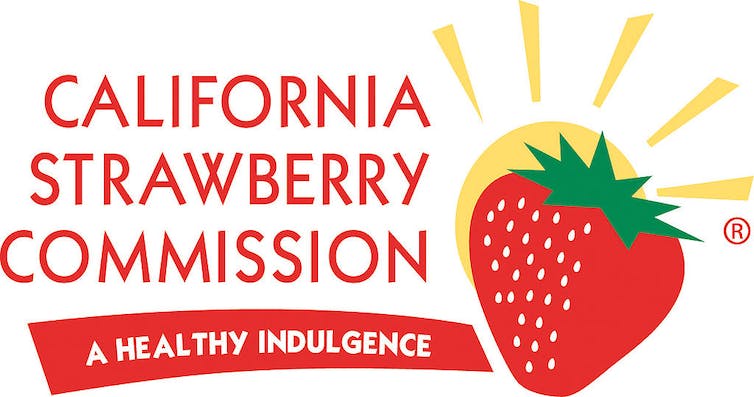 Chemical-free strawberries for the few

Informed and concerned consumers ingrained with California’s deep culture of environmentalism have turned to organic strawberries, which they see as a more sustainable option. As conventional growers took note of this vibrant market, organic strawberry production rose fivefold between 2000 and 2012, to reach about 3,300 acres planted in 2017, which represents 12 percent of all strawberry acreage.

But although organic growers use non-chemical soil fumigation methods or rotate strawberries with crops that have a mild disease-suppressing effect, such as broccoli, few of them fundamentally alter the production system in other ways. In my research, I have observed that some growers are finding land away from prime areas that can be quickly certified for organic production, but have no long-term plans to manage soil diseases when they inevitably arise – a practice that is not in the spirit of organic production.

A small but dedicated set of growers have learned how to raise strawberries for the long haul without fumigants. However, even they use starter plants produced on fumigated soil, since no nurseries produce organic plants. Crucially, for these growers strawberries are a minor crop in what are otherwise highly diversified systems. And most of these producers are located outside of prime strawberry growing regions, where land is cheaper. Their approach therefore is not nearly replicable for growers producing for the mass market.

These exceptions tell us as much about the limits of California strawberry production as does mainstream production. Consumers who want organic strawberries must be willing to live with compromises, pay premium prices – and eat their broccoli. For others, the dream of affordable year-round strawberries grown without toxic chemicals is already an impossible one.

Julie Guthman is a professor of social sciences at the University of California, Santa Cruz

This article originally ran at the Conversation and has been republished here with permission.