One of the more popular claims by critics of GMOs is that only a few countries grow genetically engineered crops, led by the United States, Canada, Brazil and Argentina. That’s just not true. It’s a worldwide phenomenon, and breakthroughs continued this year with the introduction of GMO crops in Kenya and Nigeria, and the anticipated rollout of Golden Rice in the Philippines.

To set the record straight, the Genetic Literacy Project has released “Where GMO Crops are Grown,” a combination of two linked infographics that illustrate the explosive growth worldwide in the use of transgenic seeds over the past three decades. [click on infographic to display pdf] 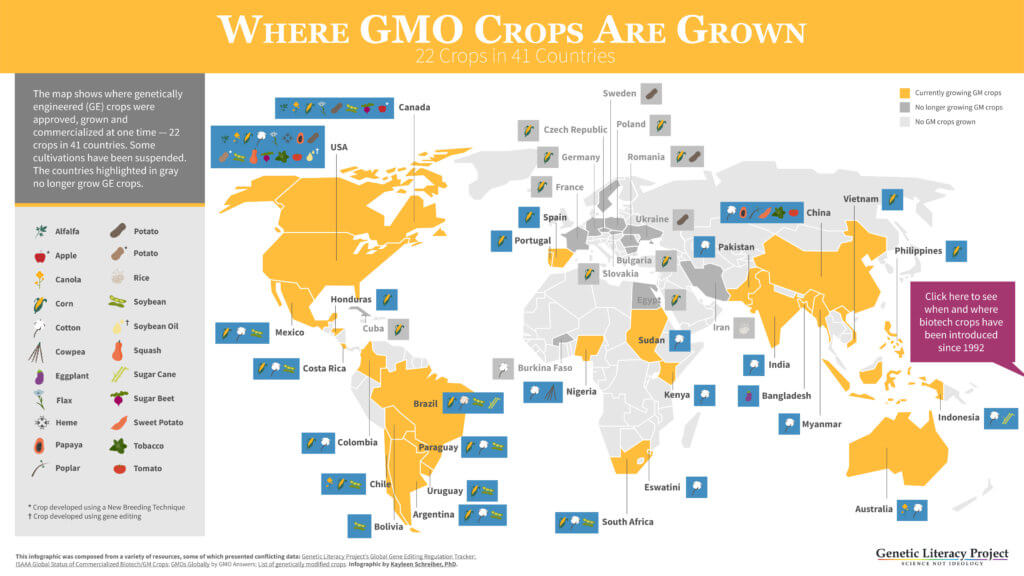 Designed by GLP data visualization specialist Kayleen Schreiber, the graphics document the introduction of 22 different crops developed in 41 different countries through transgenics (GMO), gene editing or other New Breeding Techniques. As the first of the two infographics illustrate, not all the countries that have introduced genetically modified crops over the past 28 years are still growing them, and some countries that still grow them have discontinued various crops for political or economic reasons.

For example, the first GMO crop commercialized in the US was the FLAVR SAVR tomato, engineered to extend its shelf life and minimize fruit softening. It fell short of expectations and its producer, Calgene, discontinued sales. Currently, 28 nations grow nearly 200 million hectares of genetically engineered plants every year, a roughly 113-fold increase from 1.7 million hectares in 1996. Biotech crops are the fastest-adopted technology in the history of modern agriculture.

The second infographic can be accessed by clicking on the purple box on the right side of the map, which launches an animation documenting when each of the 41 countries commercialized its first biotech crop. [click on infographic to display pdf]

Related article:  'Wild and frightening possibilities': How AI and genomics could affect reproduction

The two graphics can be downloaded together here, or you can download each graphic separately: Where GMO Crops are Grown or 41 Countries Planted Their First Genetically Altered Crop, 1992-2020.

An evolving story emerges from these infographics. While many nations have embraced genetic engineering and never looked back, 13 of 41 countries have stopped cultivating biotech crops altogether. Burkina Faso, for example, under huge political pressure, halted the cultivation of GMO insect-resistant Bt cotton in 2015, leaving its farmers to face increased pesticide exposure and higher production costs.

Meanwhile, other nations, like China, are close to green-lighting many different plant varieties, and import many GMO crops, but currently only allow their farmers to grow a limited number of genetically engineered crops. Because of this tangled regulatory web, just five nations—the US, Canada, Brazil, Argentina and India—cultivate roughly 90 percent of the world’s total biotech crop acreage.

ADVERTISEMENT
ADVERTISEMENT
Nonetheless, the spread of crop biotechnology is a worldwide phenomenon, contra the rhetoric of many anti-GMO groups. Activist organizations like Greenpeace allege that biotech crops have been a flop throughout most of the world. This narrative is misleading since so many countries continue to approve and cultivate GMO and gene-edited crops, including developing nations such as Kenya and Nigeria, which joined the GMO club in 2020. Both countries recently approved insect-resistant Bt cotton, while Nigeria also gave farmers the go ahead to plant an insect-resistant cowpea.

Kayleen Schreiber, neuroscientist and science communicator, is director of the GLP’s gene-editing tracker and index. Follow her on Twitter @KSPHD.