How do we pick apart an organ as complex as the brain and gain a better understanding of what goes wrong in diseases like Alzheimer’s or Parkinson’s? A piece of technology that has gained considerable traction over the last decade may have the answer.

The human brain is likely the single most complex biological system known to man. It is comprised of billions of cells that create an immense electrical network with trillions of connections, all of which play their own roles in how you think, learn and behave. Despite all our great advancements in computer technology, we have yet to create something that comes close to the raw processing power of our neural circuitry.

What is ‘brain-on-a-chip’ technology?

One of the reasons the brain is difficult to study is there are a lot of moving pieces to the puzzle. The billions of cells that make up the vast network within the brain are not identical to one another and there are several distinct cell types, each with their own job to do.  Picking apart this complex picture is no small task but the emergence of ‘on-a-chip’ technologies has provided scientists with a platform for analyzing how individual cells interact and contribute to brain function. As a result, numerous groups across the globe are exploring such models to gain a greater understanding of how the human brain works and what mechanisms are in play when a person develops diseases such as Alzheimer’s and Parkinson’s. 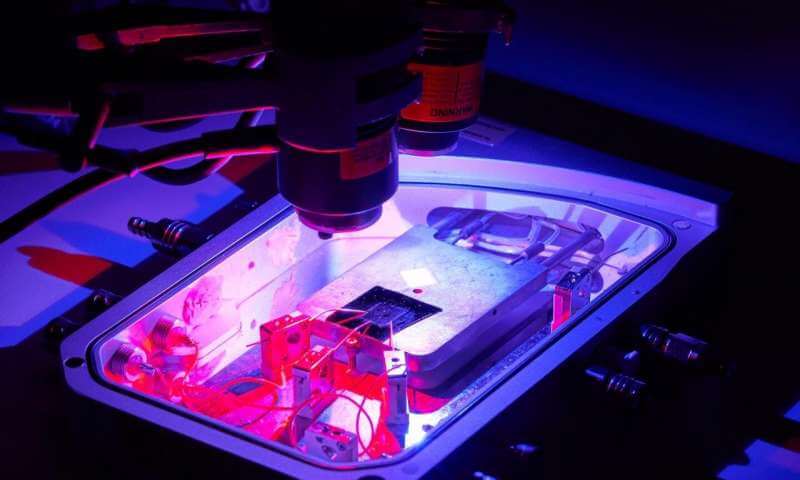 Dr. Paul Roach runs a research lab at the University of Loughborough and he had the following to say about brain-on-a-chip devices:

Brain-on-a-chip tech brings together advances across a wide range of disciplines in a single platform. Many have visions to use this tech to better our understanding of a living brain, or more specifically regions or discrete circuits with the brain.

In short, brain-on-a-chip devices give researchers the opportunity to build ‘circuits’ using the electrically active cells of the brain. A standard device is normally around the size of a microscope slide (25 mm x 75 mm/ ~1 inch x 3 inches). The device is segregated into discrete compartments which can be used to support the growth of different cells. Each compartment is usually connected to each other to allow scientists to study how cells in one compartment communicate and signal cells in the other. Channels within the device allow a constant flow of nutrients to create an artificial blood supply for the cells and each compartment can be modified to contain micro-sized electrodes for recording the electrical signals that pulse throughout our nervous system. The potential of such devices for studying the brain is huge and Dr Roach’s lab works actively in optimising them for getting the most useful data:

Other researchers have looked towards modelling disease or applying the tech to push the investigation of drugs/cellular therapies for neurological diseases. In our lab we have recent work addressing all of these points, but have really focused on ways to improve the model biologically, as well as better monitor the function and handle the data obtained.

The latter point is perhaps best demonstrated in Dr Roach’s latest contribution to the field. In a recent study, his research group utilized a specially tailored brain-on-a-chip device to recreate a neuronal circuit that is known to degenerate in conditions such as Huntington’s and Parkinson’s disease. The team designed a device with 5 compartments, each recreating a different region of the brain and were able to demonstrate electrical signalling between neural cells across the different regions.

Dr Roach’s group is not the only one making progress in this active field. In one study, researchers at the Israel Institute of Technology created a device that allowed them to study the delivery of a potential preventative for Alzheimer’s to the brain. Using specially designed chips, the group was able to treat brain cells with neural growth factor and study the crossing of the notoriously impenetrable blood brain barrier. This is a key step in developing drugs to treat brain conditions with many candidates failing clinical trials due to an inability to cross from the blood supply and into the brain. In another development, a research group in the University of Houston developed a brain-on-a-chip device for screening of multiple drug candidates to treat glioblastoma. What is perhaps more exciting is the fact studies like this are not few and far between. Research groups across the globe continue to innovate and expand on these platforms, thus shaping brain-on-a-chip devices into serious contenders for finding that next big break in treating neurological conditions.

Shaping the future of research?

It is easy to see why brain-on-a-chip devices are viewed with such promise. They offer advantages over many platforms that have been a staple of brain research for decades. The ability to fine tune which cellular interactions you study provides a much more controllable insight into brain function than the study of animal brains or human post-mortem tissue. Instead of trying to study the trillions of cellular interactions at once, researchers are able to choose which specific cells and circuitry they probe, allowing them to gather data that is much more specific to the issue they are trying to address.

We should not, however, look upon these devices as a ‘one size fits all’ solution to our shortcomings in understanding the brain. The brain’s complexity means we need to approach our scientific endeavors from multiple angles. What these devices give us is a means to hone in on the finer details of brain function, removing all the noise that can make interpreting data difficult when studying the brain as a whole.

They provide us with a great platform for picking apart some of the more precise mechanisms behind brain function/dysfunction and could be powerful tools for the next generation of drug discovery. As with any scientific venture, much more work will be needed to fulfill the potential of brain-on-a-chip devices. Science by its very nature is never ‘done’ and there is always room for improvement and further innovation. This is, however, definitely a space worth watching.