Rwanda has achieved astonishing results in controlling the novel coronavirus, recording just five deaths from COVID-19 even as cases continue to rise throughout Africa.

Though some foresaw problems for Rwanda — a poor, landlocked country of 12 million people with a tourist-dependent economy — its success in managing the global pandemic by implementing science-based policies has set an example for other countries to follow, especially in Africa.

“For us, what is important is to manage the science part of it…and the health part of it and also to be able to revive the economy,” said Clare Akamanzi, CEO of the Rwanda Development Board (RDB), in an interview with CNN. “We believe we have had a formula and we keep working to contain the virus.”

The question now is whether Rwanda will be able to ensure that people entering the East African nation are free of COVID-19 following the Aug. 1 reopening of its airports. Akamanzi said that Rwanda will be relying on lessons learned from science and its previous experience with diseases like HIV and tuberculosis.

“We have to learn how to safely live with the virus until the vaccine,” Akamanzi said. That means building trust between government and communities to embrace new ways of living, expanding testing capacity from 300 COVID-19 daily tests to the current daily total of 3,000, implementing a contact tracing system with 1,900 tracers working across the country and regional collaboration with its neighbors.

Akamanzi also spoke of Rwanda’s intention to further revive its economy through the new Economic Recovery Fund. The fund launched with US$100 million in support to the private sector, with the government pledging to double that figure to US$200 million.

Economic recovery is crucial to poor families that live on short-term earnings. This demographic encompasses a large portion of the African population, particularly farmers who can’t get their produce to market due to closed borders and a paralyzed hospitality industry.

The hospitality sector, a robust and booming part of the African economy, has suffered during COVID-19, virtually halting the influx of foreigners and putting huge stress on the food system. The market is currently flooded with fresh produce, making it difficult for poor farmers to earn a living. 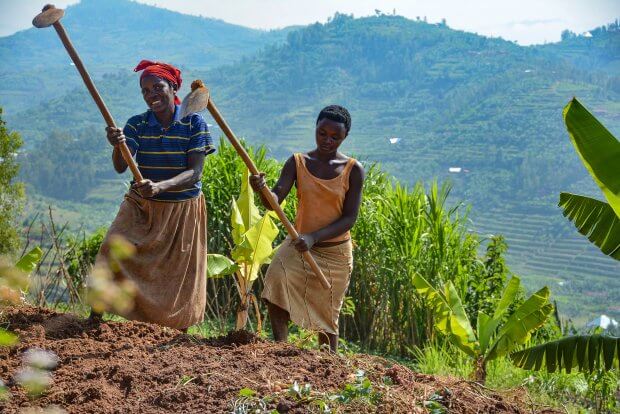 On a global scale, this scenario has been addressed by the United Nation’s Food and Agriculture Organization (FAO), which issued a report predicting a shortage  of protein-rich foods and hammering the urgent need to prioritize social and economic recovery. The total utilization of coarse grains is forecast to regain momentum in 2020/21 but remain below global production for a second consecutive season, leading to higher stock levels and keeping international prices under downward pressure (FAO 2020 Food Outlook).

Meanwhile, the crop production that feeds and employs millions of Africans is expected to require new technological inputs in response to climate change impacts and agricultural pests.  Many farmers, especially those in the region from Central Africa to the Horn of Africa where insect pest and droughts have been ravaging their fields, are pinning their hopes on science and technology.

Thanks to new agricultural inventions, more African models are emerging and standing tall, such as breeding crops that emit an odor that attracts the natural enemies of pest species. Scientists at the International Center of Insect Physiology and Ecology (ICIPE) in Nairobi, Kenya, discovered ways to isolate maize traits at the genetic marker level and breed varieties that can withstand stemborer infestations by attracting Cotesia Sesamia, a parasite native to Africa that kills cereal stemborers.

African nations face enormous burdens due to COVID-19 as governments struggle to provide alternative livelihoods for families that can’t feed themselves. They managed to keep the number of hungry nights proportionately survivable until a good number of countries were able to ease many of the draconian measures imposed during lockdown, though borders and airports remain closed in many areas.

At a time when African nations are facing an existential need to integrate science into daily life within communities, fact-informed decisions are key to bringing the continent’s economies back to life. This is particularly true in the agricultural sector, where farm productivity and crop health are paramount to both food security and economic vitality. Africa must harness scientific and technological research and innovations to fuel agriculture, the continent’s main employment sector, which is at the forefront of a successful economic recovery.

Pacifique Nshimiyimana is a young agripreneur from Rwanda. As a business person, he founded and currently runs Real Green Gold Ltd, a social enterprise which does farming of tropical fruits and vegetables and smallholder farmers’ extension services. Follow him on Twitter @Pacifiquens