COVID-19 vaccine state-by-state availability tracker: When will you be able to get the shot?

The Post is tracking how many doses are expected to be delivered in the first set of Pfizer’s newly authorized vaccine and by end of the year.

According to the official CDC guidance to the states, the first to receive the vaccine are health-care personnel — because of their exposure to the virus and their critical role of keeping the hospitals functioning — and residents and staff of nursing homes.

The next priorities may be essential workers (think of food, utilities, transportation, police and maybe teachers), then everyone with a preexisting condition like diabetes, heart problems or obesity, and older adults. These are provisional priority groups, based largely on federal recommendations. States will have the final say on who gets the shots and where they are administered. In Illinois, for instance, Gov. J.B. Pritzker (D) said he would send the first vaccines to health-care workers in the counties with the highest death rates.

The CDC advisory committee spent several months modeling allocation scenarios that would spread the disease while also offsetting health inequities. Black, Hispanic, Asian and Native American people are dying from covid-19 at a higher rate than White people because they often work in jobs that require daily interaction with the public, and they have unequal access to health services and insurance. 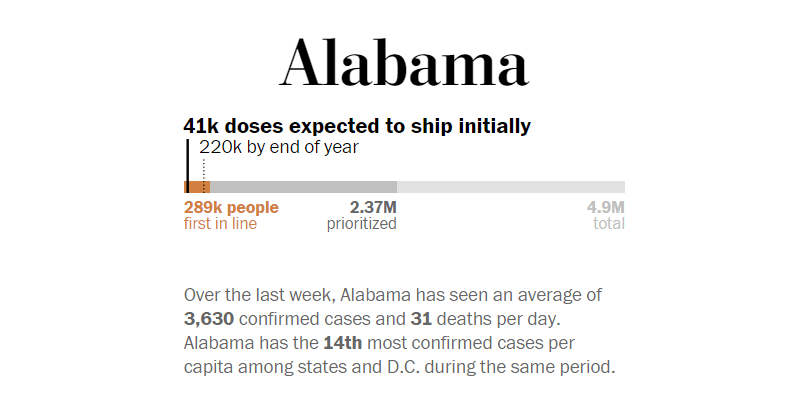 See all states here (Will continue to be updated)