Can anything be done to counter anti-vaccination activists?

This article or excerpt is included in the GLP’s daily curated selection of ideologically diverse news, opinion and analysis of biotechnology innovation.
Recently, anti-vaxxers protests shut down the mass vaccination program underway at Dodger Stadium in Los Angeles. In Israel, the global poster child for a successful vaccination program, anti-vaxxers are making vaccine appointments, then canceling them at the last moment – causing needless waste of a still precious commodity. They’re also making threatening robocalls warning parents that the vaccine causes illness and death, using false statistics to back themselves up.

What, if anything, can be done?

Much of the anti-vax message is disseminated on social media – along with death threats to pro-vaccine proponents and assaults on public health officials trying to increase vaccine uptake. Facebook and Twitter say they are restricting these messages. Youtube has taken down some anti-vax videos. But much misinformation remains. Nor is social media the only deployment vehicle. Conferences and pamphlets and robocalls are prime transmission vehicles, along with websites. So, even if we could remove Robert F Kennedy Jr. from Twitter and Facebook, as Dr. Berezow advocates, Kennedy-Jr’s website, Children’s Health Defense, for example, contains some pretty egregious stuff that would elude social media regulation. 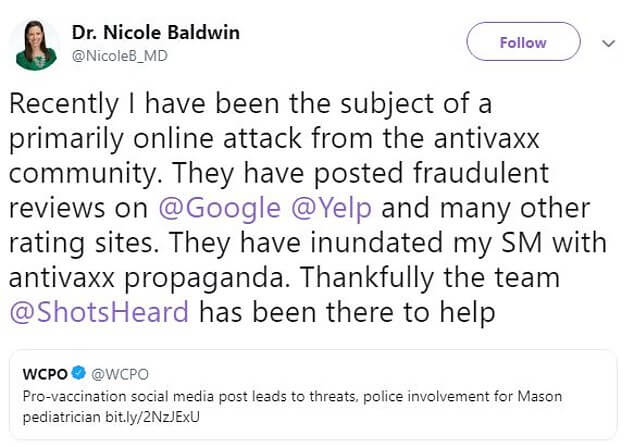 Consider the article on the website by Claire Dwoskin (a wealthy funder of the anti-vax movement) regarding the apparent effects of autism and aluminum – sometimes used as a preservative in vaccines. Dwoskin reports that “[a]breakthrough study … has been published … demonstrating that significant correlations exist between rates of Autism Spectrum Disorder (ASD) and total aluminum adjuvants given to children through vaccines in several Western countries.”  Reader, please note that this “study,” was done in mice.

According to Dwoskin, the “research” evaluated the social interaction of mice as a marker of a “key feature of Autism Spectrum Disorder” in humans — social interaction. How? By measuring rodent sniffing!  The researchers found that mice injected with aluminum spent more time sniffing an empty cage than a  “stranger mouse” in a different cage. They concluded that this showed “showed diminished social interest…” at least in the world of rodents. Nevertheless, they admitted that:

“…this study alone cannot make any substantive claims regarding the link between aluminum and ASD in humans.”

But Dwoskin doesn’t tell us this. Instead, she blithely asserts, in a leap of faith – that the study “demonstrate[es] that significant correlations exist between rates of Autism Spectrum Disorder (ASD) and total aluminum adjuvants given to children through vaccines in several Western countries, and … that aluminum adjuvants can impair social behavior if applied in the early period of postnatal development.”

Attempting to further the false aluminum-autism/social impairment narrative, the Kennedy Jr. website reports on another experiment, this one seeking to demonstrate the aluminum adjuvant caused increasing anxiety and compulsive disorders in vaccinated children. This study was done in sheep.

After observing sheep repeatedly vaccinated or administered an aluminum adjuvant, the researchers reported that the sheep suffered depression. How do you identify depression in sheep? By a “lack of response to stimuli, stupor,… and lethargy…..”

This finding, “intermixed with periods of excitement, restlessness, polyphagia, and increased aggressiveness, especially compulsive wool biting between animals. … [along with] pacing relentlessly and overeating,” lead the researchers to conclude that in addition to depression, the sheep suffered anxiety. And because the exposed sheep were more anti-social and spent less time lying down than the control sheep, the website author concluded that this “can be used to identify social stress” in these normally gregarious animals, a conclusion she then applies to human children.

Regardless of the study’s significance vis a vis sheep, there is a logical leap between comparing diagnoses of bovine depression and anxiety – even if valid – and connecting aluminum exposure to emotional disorders and autism in children.

Can this rhetoric legally be banned?

Can we legally shut down websites, social media posts, along with conferences and pamphlets that are misleading or actively spouting lies? The short answer is: no – at least not as things stand at present.

Alas, the misinformation and lies of the anti-vaxxers are not exceptions to free speech protections. In other words, for now, anti-vaxxer rhetoric -as harmful and false as it is – is protected under the First Amendment. The prescribed legal remedy is not to silence the misinformation and lies, not less speech or no speech – but more speech – counterspeech – designed to correct it.

The antidote to unfortunate speech is “counterspeech”

If there is time to expose through discussion the falsehood and fallacies to avert the evil by the processes of education, the remedy to be applied is more free speech, not enforced silence. Only an emergency can justify repression.

Justice Breyer, often considered a liberal of the Court, updated the concept of counterspeech in the 2012 decision involving lying about one’s war record in violation of a statute criminalizing this behavior, which the Court struck down as unconstitutional:

“The Government has not shown, and cannot show, why counterspeech would not suffice to achieve its interest. The facts of this case indicate that the dynamics of free speech, of counterspeech, of refutation, can overcome the lie.”

And there it is, free speech, including the right to lie, is protected – because usually there are less restrictive ways to counter a lie than to prohibit its utterance.

So, is it true – does counterspeech work?

“Misinformation is not a new problem, but it poses particular challenges for infectious disease management when public acceptance is required for prevention behaviors….”

Sadly, a recent study from the CDC’s Emerging Infectious Disease website demonstrated that counterspeech doesn’t work in the context of epidemic control, at least not today. 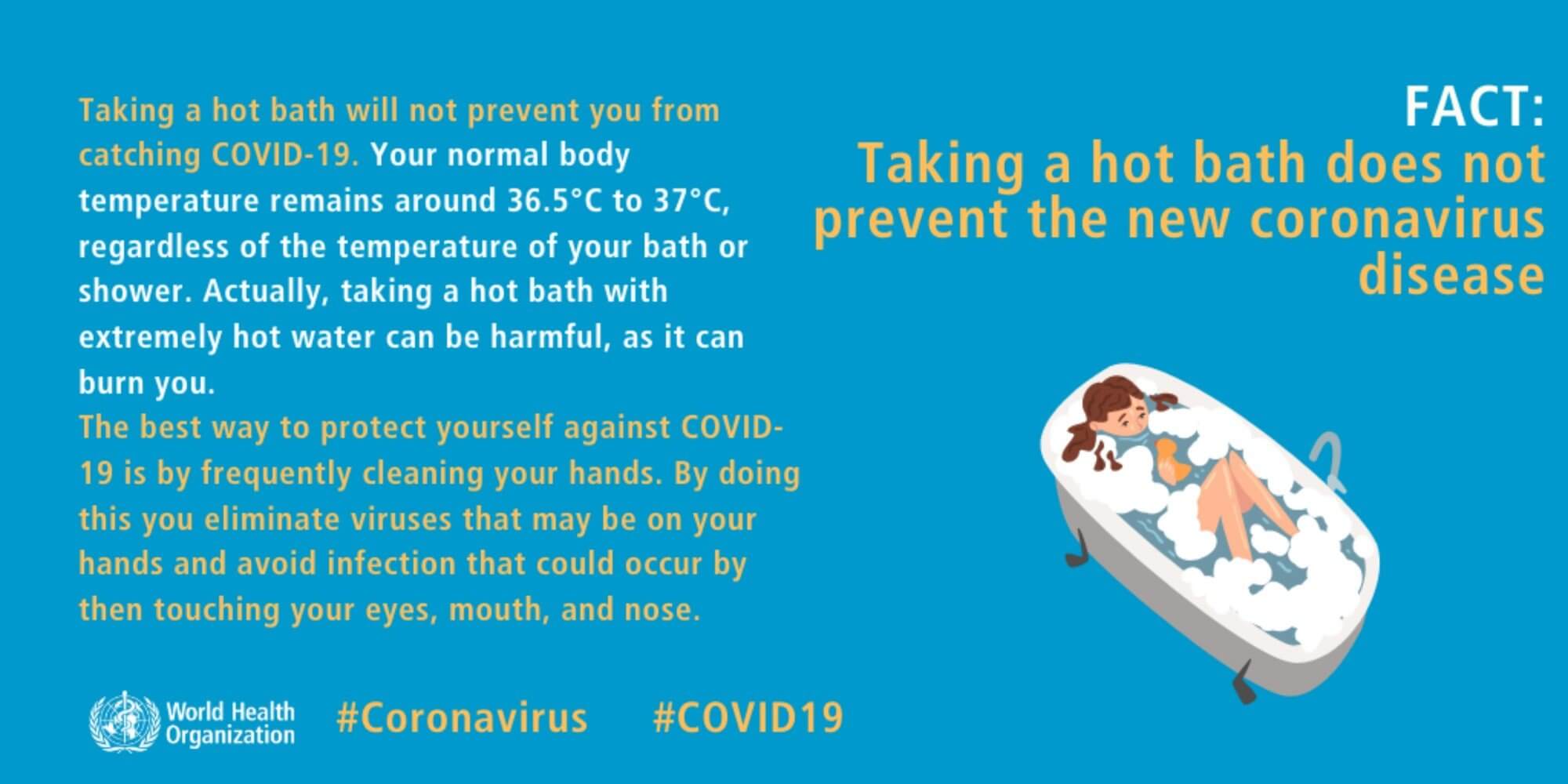 The first myth was successfully “detoxified,” – changing the participant’s minds and correcting the misinformation.

The second myth relates to preventative measures, and here the counterspeech efforts failed. Respondents persisted in their belief in idiosyncratic, non-science-based treatment modalities, even after the “science” behind it was debunked.

Belief in such “alternative” treatments, by implication, preempts uptake of vaccines and scientifically recognized measures like social distancing and masking. In fact, anti-vax conferences and websites are prime venues for selling alternative “natural” cures that appeal to anti-vax adherents.

“Some research suggests that corrections fade over time, and the myth could actually be reinforced through an illusory truth effect of seeing misinformation repeated.”

The study’s authors also suggest vaccine myths may be reinforced by the frequency of exposure to that message. Moreover, the algorithms of social media drive us towards those who share our views in a way that media, before the amplification by computers and bots, could not accomplish.

It has oft been said that the law lags behind the science. The time has come to accept the reality – the counterspeech envisioned by great jurists of our past is ineffective in today’s 24/7/365 world of social media and the internet. Perhaps we should do something about it – that is if we want to preserve public health.

Dr. Barbara Pfeffer Billauer, JD MA (Occ. Health) Ph.D. is Professor of Law and Bioethics in the International Program in Bioethics of the University of Porto and Research Professor of Scientific Statecraft at the Institute of World Politics in Washington DC. Find Barbara on Twitter @BBillauer