Viewpoint: How does the scientifically bankrupt claim glyphosate poses harm to humans remain popular? By dishonest ‘reporting,’ including from scientists who put ideology over evidence

This article or excerpt is included in the GLP’s daily curated selection of ideologically diverse news, opinion and analysis of biotechnology innovation.
The Conversation bills itself as a website designed to “Unlock the knowledge of researchers and academics to provide the public with clarity and insight into society’s biggest problems.” Their science commentary is generally very good, and I wouldn’t hesitate to recommend it to anyone—at least I wouldn’t have hesitated until I read this article: While debate rages over glyphosate-based herbicides, farmers are spraying them all over the world.

As the title suggests, the authors depicted glyphosate as a potentially deadly weedkiller, wantonly overused by farmers with little oversight from environmental regulators. “Farmers use [glyphosate] on a majority of the world’s agricultural fields,” they wrote. “Humans spray enough glyphosate to coat every acre of farmland in the world with half a pound of it every year.” This is alarming, they continued, because “scientists are still debating its health effects.”

To say that this was a misleading assessment of the science on glyphosate safety would be far too generous. Even after the editors issued a correction and removed a claim about glyphosate detection in breast milk, the story was still unfit for a site as reputable as The Conversation. Let’s take a look at some of the authors’ key claims. 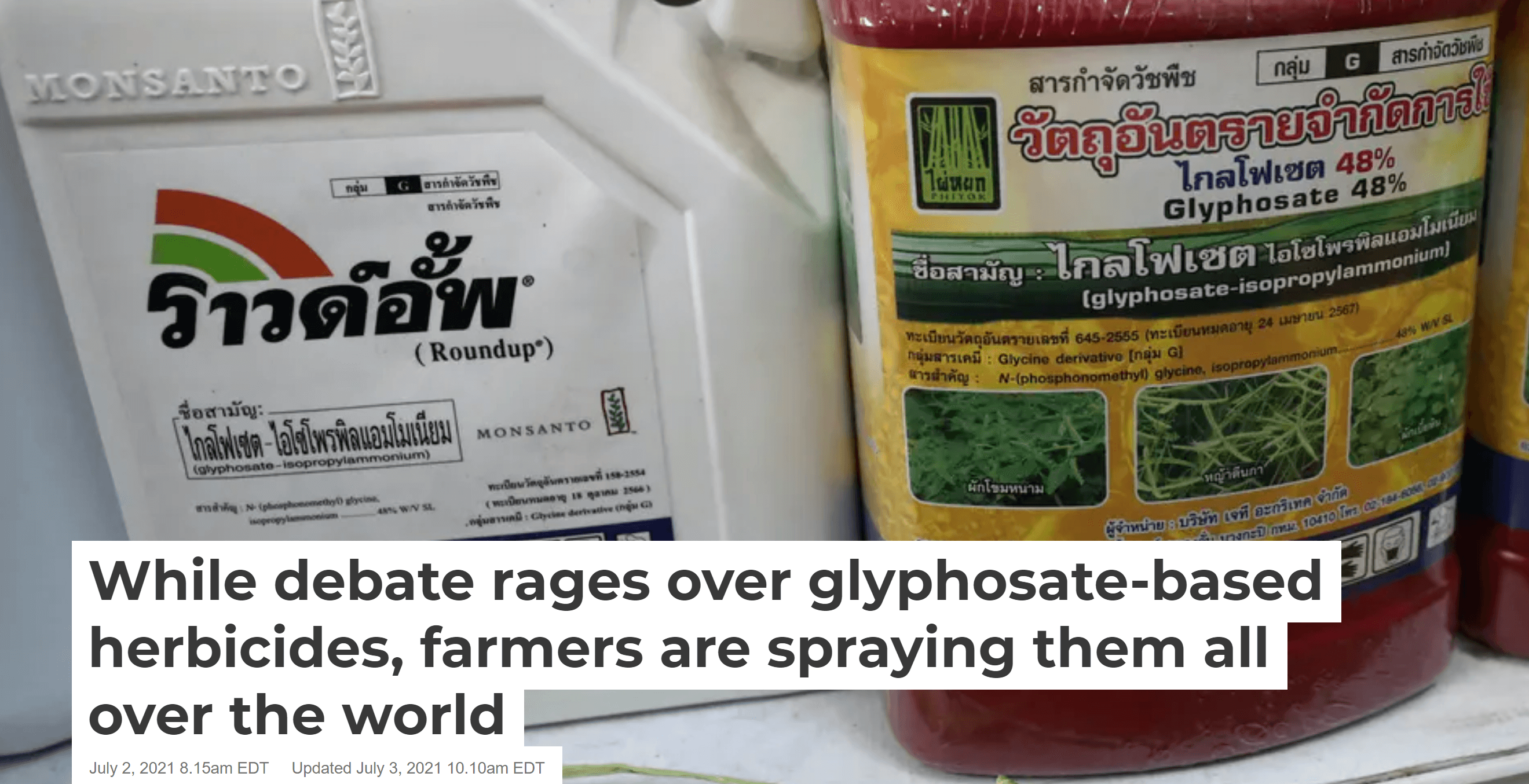 To support their claim that glyphosate is found almost everywhere, the authors cited a 2018 Environmental Working Group (EWG) report, which found trace amounts of the weedkiller in popular breakfast cereals. As the Genetic Literacy Project’s Jon Entine and I explained at the time, this has more to do with improvements in analytical chemistry, which allow scientists to detect tiny quantities of almost any substance essentially wherever they want to find it. But detecting a chemical doesn’t mean it’s harmful:

By the EPA’s standard, you’d have to eat 30 bowls or more of cheerios a day, every day, for more than a year to even approach the US limit, which is itself set 100 times or more lower than what might actually harm someone. In other words EWG just made up its own, ridiculous, scare standard, which is as much as 14,000 times lower than the EPA’s.

By the way, EWG is funded by organic food companies and its report was not published in a peer-reviewed journal. My colleague Dr. Josh Bloom also weighed in on their underhanded campaigning methods:

The EWG uses the same tactics to make every chemical in their sphere of ignorance look bad—the false notion that the presence of a chemical in any way predicts harm from that chemical. Why do they keep using this ‘fear formula?’  Because it works.

On a related note, covering “every acre of farmland in the world with half a pound” of glyphosate sounds pretty shocking, but farmers use pesticides, including weedkillers, quite sparingly. “Most crop protection products are applied in the range of 3 – 64 oz. per acre,” plant pathologist Steve Savage has explained. For scale, an acre is roughly the equivalent of a football field or 15-and-a-half tennis courts.

This makes economic sense from a grower’s perspective, Savage added. “Farmers don’t have any incentive to spray more crop protection agent than they need—these products cost money.” Adding up all the glyphosate used globally in a year is a meaningless exercise designed to scare people.

Related article:  Farmers in Quebec, Canada will now have to get permission to use neonicotinoid insecticides on crops

Back to The Conversation piece:

Scientists are unlikely to reach consensus soon about glyphosate’s health and environmental impacts.

No, but they have already reached a consensus. 17 regulatory agencies and thousands of studies have evaluated glyphosate’s human health and environmental impacts, including a just-released report from the European Union. Except for a one-sentence reference to the EPA’s website, the authors discussed none of this literature. Naturally, they cited the International Agency for Research on Cancer’s (IARC) 2015 monograph. That review concluded that glyphosate is a “probable carcinogen,” but the agency excluded data that would have reversed its conclusion. As the eminent statistician Robert Tarone explained to Congress in 2018:

My published paper notes other instances in which rodent tumor rates which might support a conclusion that glyphosate is associated with tumor risk were included in the Monograph 112 glyphosate deliberations, while tumor rates from the same studies that do not support an association between glyphosate exposure and tumor risk were excluded. Such systematic exclusion of exculpatory evidence is outrageous, particularly when it is practiced by an influential source such as the IARC Monograph Program.

IARC, like EWG, has serious conflicts of interest. Several of the agency’s scientists regularly serve as expert witnesses in lawsuits against the manufacturers of products that IARC evaluates.

The simple fact is that kidney damage has not been linked to glyphosate exposure in human populations. The research implicating glyphosate as a cause of liver damage in rats was based on data from a retracted (and now infamous) 2012 study by French geneticist Giles-Eric Séralini, who also has financial ties to the organic food industry. The paper on bee gut health found that a lower dose of glyphosate was more harmful than a higher one. “When lower doses of a chemical or drug produce more of an effect than higher doses, this is a screaming red flag,” as Josh Bloom explained in his analysis of the study.

There isn’t an ongoing debate about glyphosate among experts. Instead, there are a handful of organizations and academics with clear conflicts of interest that continue to ignore the preponderance of evidence. Why The Conversation decided to run this story, I’m not sure. But let’s hope this was a rare strikeout for a website that otherwise does a lot of good for science outreach.

A version of this article was originally posted at the American Council on Science and Health and is reposted here with permission. The ACSH can be found on Twitter @ACSHorg
The GLP Needs Your Help
It is easier than ever for advocacy groups to spread disinformation on pressing science issues, such as the ongoing coronavirus pandemic. No, vaccines are not harmful. Yes, the use of biotechnology, GMOs or gene editing to develop antigens for treatments including vaccines are part of the solution. To inform the public about what’s really going on, we present the facts and challenge those who don't. We can’t do this work without your help. Please support us – a donation of as little as $10 a month helps support our vital myth-busting efforts.
DONATE
TwitterLinkedInFacebookReddit