Henry Oscar Rowlands (born around 1980-1985) is a Welsh (Wales) native, activist and organic entrepreneur sometimes based in Sophia Bulgaria and publisher of the Sustainable Pulse. He works closely with anti-GMO campaigner Claire Robinson of Earth Open Source. Both have a working relationship with Jeffrey M. Smith, who is linked to the Maharishi cult. Rowlands has been linked to various business interests in Bulgaria and the U.K. with loose ties to both the Maharishi movement and the Sustainable Food Trust (an organic-linked NGO run by former U.K. Soil Association chairman Patrick Holden). Rowlands has traveled and campaigned with Green Party activists in Australia. Via his websites he is also supporting the Hawaii-based Babes Against Biotech and the July 4, 2013 Moms Against Monsanto anti-GMO march campaign, which are also closely tied to Jeffrey Smith’s advocacy initiatives. A member (or former member) of the Royal Society for the Protection of Birds (RSPB), Rowlands proclaims to be a dedicated environmentalist.

Rowlands claims he attended the Universidad de Granada in Spain and has served as a translator and editor for various groups, but is primarily a self-employed entrepreneur. He is also a member of the Bulgarian national cricket team, founding member of the St. David’s Cricket Club and was a “football scout” for www.boutique-football.com. Rowland is the son of “Allo Allo” (UK TV series) actor David Rowlands (b. 1944) and business woman Gillian Rowlands in the UK, raised on the family farm in Wales (note, “family farm” in the U.K. implies wealth and potential peerage, as compared with the similar affiliation in the United States). He has been active in local politics in the U.K. as a Youth Officer for the Preselie Pemrokeshire Constitutency Labour Party and member of the executive committee of the Constituency Party. He moved to Bulgaria around 1995 to set up an ex-pat english language newspaper called The Frontier Times.[1] He is the brother of Luke N. Rowlands, who founded EcoCognito,[2] “a game-changing environmental, sustainability, CSR and green marketing consultancy” which is a partner in the Rowlands’ organic marketing company TransBalkanic.

Rowlands is Director (February 2012 – present of Sustainable Pulse) Rowlands claims Sustainable Pulse is UK-based, but is registered in Bulgaria. He promotes this as “an exciting and simple worldwide platform that brings the whole Sustainable Movement together. It is the new home for all those interested in creating one voice in support of sustainable food and energy systems.”

Rowland claims, “Green Energy, Sustainable Food Systems and Genetically Modified Crops are all on the agenda as Sustainable Pulse aims to force real change over the next 10 years.”

Sustainable Pulse Works, according to Rowland as follows: “Campaigns: Supporting their partner’s campaigns as well as creating their own – Sustainable Pulse has developed a simple to use petition system. All of our petitions will reach the top decision making tables around the world. News: 24 hour sustainable news and views supplied directly by Sustainable Pulse members – Everyone is welcome! SP News will be a true discussion platform on the important issues. Research: The research library will allow people to make up their own minds based on the facts – all scientists, even those shunned by some quarters, will be given an equal and fair platform to showcase their findings. Partners: All organizations that support sustainability in any form will be welcome to share their campaigns and views on the Sustainable Pulse platform.”

Rowlands is also principal (November 2011 – present) of his own consultancy based in Bulgaria for which he only notes, “Helping You Go Beyond Borders.” Website: http://raglobe.com/ From which Rowlands runs his various advocacy partnership operations. In marketing materials he claims his work is supported by the Prince of Wales.[3]

Director (September 2010 – present) of organic “experts in Balkans” which he claims is the “largest organic produce agency in the region.” Website: http://www.transbalkanic.com/

Rowland’s blog proclaimed in January 2012, “Organic buyers from the UK or other European countries have already shown a keen interest in many products and Rowlands added that the demand is still outweighing supply possibilities, which “is a sad situation but one we hope will change soon.”[5] 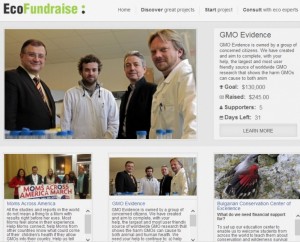 launched multiple advocacy websites and initiatives (many of which he registered while still employed by the NGO, Sustainable Trust, where Patrick Holden was director). He has been a primary “exclusive” source releasing and promoting GMO health risk claims in partnership with GM-Watch (Claire Robinson) from sources like by Gilles-Eric Seralini, Judy Carman and other “activist” linked researchers. Rowlands hosts numerous anti-GMO websites in addition to his organic lobbying and marketing business interests. He runs a fundraising destination “ecofundraise.org” raising money for “Mom’s Across America” March against Monsanto and the GMO Evidence project linked to Gilles Eric Seralini.

Website was created by Organic Consumers Association “member” Diana Reeves who is also credited with helping organize the Mom’s Against Monsanto and related Millions Against Monsanto campaigns and launched by Rowlands’ Sustainable Pulse in February of 2014. Rowlands is on the Steering Committee. GGFC is a coalition which claims will serve as a “rapid response” arm of the anti-GMO movement to promote its own peer reviewed science from global experts who oppose GMOs and pesticides in coordination with ENNSER, the Union of Concerned Scientists and other groups it claims offer ‘independent” proof of the dangers of GMOs and conventional agriculture. The coalition claims it will lobby governments and the public to stop GMOs. GFGC is soliciting “tax-free” donations. According to the site, “Currently many articles that mislead the public by supporting the narrow arguments of the biotech industry are published by the ‘Mainstream media’. These articles often go unanswered. The GGFC will make sure that a coordinated rapid response is provided. … GGFC Rapid Media Response Team will be a match-making service to connect GMO experts with lawmakers and the media. The GGFC will be committed to providing rapid, high-quality information to media and government officials.”

Rowlands claims he is working with Seralini and created his website “GMO Seralini” for him.[6] Working with Earth Open Source editor Claire Robinson, they “hope to provide a one-stop resource for information about the research of Professor Séralini and colleagues on genetically modified foods and their associated pesticides…” This site was originally registered to Rowlands using his Balkan organic food export-import business then he transferred the domain name ownership to a privacy protection service. Website: http://gmoseralini.net/

Rowlands registered and hosts the official website for anti-GMO researcher Judy Carman. Like GMO Seralini, the GMOJudyCarman.org (.com, .net) web domain was originally registered by Rowlands, then moved to a domain privacy service.

A 2012-2013 campaign targeting Coca-Cola to go GMO Free promoted by Sustainable Pulse to petition Coke and other retailers to remove GMOs from their products.[7]

GMO Evidence
A campaign launched September 2012 in collaboration with GM Watch and other small advocacy groups which is trying to raise funds online to promote “evidence” claims that GMOs cause harm. Website: http://gmoevidence.com/ and https://www.facebook.com/GmoEvidence

In February 2012 Rowland’s blog noted, “GMO Evidence was launched by RA Globe with the hope of providing easy access to the general public regarding the dangers of GMOs. The site is the first user-friendly worldwide library of evidence of harm from GMOs and Glyphosate to animals and humans. GMO Evidence includes scientific research from around the globe and also includes articles on real cases of harm to humans and animals, including birth defects in Danish pigs, cow deaths in Germany, GMO Genocide in India, Infertility in Ohio pigs, Vanishing Bees in the US and serious illness from GM Pollen in the Philippines. GMO Evidence also includes the very latest scientific research on the possible dangers of GM Wheat.”