Smith ran for the U.S. Congress as a candidate for the Natural Law Party (United_States), has authored several self-published books, DVDs and a movie on the dangers of genetic engineering,[1] serves on the Genetic Engineering Committee of the Sierra Club, and is a frequent conference speaker at advocacy, alternative health, organic and natural products conferences and his work is promoted on such nationally syndicated television programs as The Dr. Oz Show. Smith claims to have a background in communications and marketing,[2] has served as an occasional contributor to his local newspaper[3] and attended school at the Maharishi Institute of Management in Fairfield, Iowa where he resides.

There are few published details on Smith’s professional life prior to his joining with the Maharishi Mahesh Yogi movement and affiliated Natural Law Party in 1992 which preceded his campaigns against GMOs starting in 1999. He told Reuters in that he grew up in New York. Other than his time as a professional swing dance instructor, Jeffrey Smith has been a political activist, marketing and business development director and issues activist/author oriented around ventures linked to the multi-billion dollar Maharishi Institute religion[4] and has no other reported science education background or other credentials. He is the listed “president” of Inspirations, Inc of Fairfield, IA – a jewelry store reporting annual income of $93,000.[5] 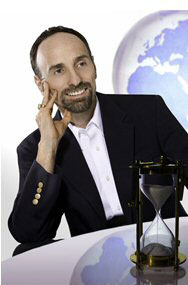 Jeffrey Smith, listing his occupation as “teacher” was a frequent donor to the Natural Law Party starting with its founding in 1992.[9]

Smith campaigned in 1996 for the Maharishi Mahesh’s Natural Law Party platform promoting transcendental meditation and yogic flying, taught and practiced at the Maharishi Institute, as a foundation for achieving world peace in politics. At campaign events in Illinois on behalf of Natural Law Party senate candidate Jim Davis, Smith provided demonstrations of yogic flying claiming the acts would “reduce crime and other ills.” Smith claimed. to have done yogic flying demonstrations at the U.S. Capitol, World Bank and United Nations as part of his campaign efforts in support of Natural Law Party candidates and promoting the adoption of teaching transcendental meditation in public schools.[10] At campaign events Smith presented charts he claimed showed mass meditation and yogic flying lowered the crime rate in Washington, D.C., by 21 percent in a demonstration project. [11]

Running on a platform promoting transcendental meditation and yogic flying in 1998, Smith was the Natural Law Party candidate for U.S. Congress in Iowa’s First District. Smith received 8 percent of the vote, losing to Republican Jim Leach.[12] Other Natural Law Party proposed platform policies promoted by Smith’s campaign included the widespread adoption of organic agriculture, an 18 percent flat-tax, and creating “macro-economic stability through increased social coherence” by having tens of thousands of practitioners of transcendental meditation that would reduce unemployment, decrease inflation and improve other economic factors.[13]

With his wife Andrea Vardi, Jeffry Smith has performed and
provided instruction in swing dance under the professional name Swing Smith since 1996 teaching students at the University of Iowa[14] and continues via the group “Lindy Fairfield” today[15]. In 1999 the Smith duo founded Swingphoria, a Lindy Hop performance group, which performed around the Midwest.[16]

Smith worked from 1999 – 2001 as the vice president for marketing, communications and business development for the Fairfield, IA-based GMO testing laboratory Genetic-ID. Genetic-ID was founded by John Fagan, a Maharishi Country of World Peace “Raja” (King) for Food Purity, dean and teacher at the Maharishi Institute. Fagan founded Genetic-ID with Bill Witherspoon, an artist and Midwest organizer for the Maharishi movement[17],[18] and Jay B. Marcus, an attorney representing various Maharishi vedic health and organic food business interests.[19]

At Genetic-ID Smith traveled around the globe promoting food testing for and labeling of GMOs in food, personally asserting they were dangerous.[20] Smith promoted Genetic-ID services to organic food companies[21], governments and activists groups[22] who opposed genetically modified foods. [23] Genetic-ID has become a partner in the Non-GMO Project campaign linked to Maharishi follower Ken Roseboro‘s Organic and Non-GMO Report.

Yes! Books in Fairfield, IA has published two books by Jeffrey Smith starting with Seeds of Deception in 2003[24], and was established as a retail book store in 2004;[25] however, there are no formal business registrations for this book publisher name with the Iowa Secretary of State. Yes! Books is co-located with Jeffrey Smith’s Institute for Social Responsibility[26], and its product offerings appear limited to various anti-GMO authored content and Smith’s self-published publications, DVD “films” and “Non-GMO Educational Materials” promotional pamphlets.[27]

Smith’s wife Andrea Vardi serves as the media contact for Yes! Books and Smith’s public appearances promoting his books.[28] Publishing under the banner of Yes! Books, Smith claims to be an international “best selling” author for his books; however, none appear verified on any such best seller lists documenting sales.

Jeffrey Smith is currently the executive director of the Institute for Responsible Technology, an organization he founded in 2003. According to a 2008 Reuters report, Smith’s Institute derives its income, for which he is paid a $24,000 annual salary[29], through speakers fees, book and DVD sales and sponsor donations for his advocacy efforts.[30] From 2004-2012 the Institute was listed as the “fictitious” business name for and operated as a project of “The Coordinating Council,”[31] a registered non-profit organization claiming no income or expenses from 2004-2007 and originally registered in Washington, State by nutraceutical lobbyist and health supplement salesman Craig Winters[32],[33] as the umbrella organization for The Campaign to Label Genetically Modified Foods political ballot initiative in that state. Smith is the only listed member and sole employee for this organization.

James Turner, an attorney representing Smith, founder of Citizens for Health and lobbyists for the herbal supplements industry, is a board member of IFRT. Citizens for Health was a major sponsor for Smith’s publishing and advocacy campaigns attacking GMOs. Other directors are Fairfield, IA sustainability activist and executive coach Robert Ferguson[35] (who is the former director of TM for the Maharishi at Walpole Prison in Massachusetts) and Fairfield Mayor Edward Malloy, also managing partner and owner of Fairfield Organics, Inc.[36] In 2011 IFRT claimed expenses including “occupancy” (rent) which appears to be paid to Smith for housing IFRT in his home along with travel and other expenses in excess of $400,000. Smith claimed no income or expenditures prior to 2011 and has not yet filed 2012 returns. (Note: To see a picture of the “Institute” scroll down to PERSONAL below as it is housed in Smith’s residence along with his self-publishing company YES! Books and other home businesses run by Smith and his wife Andrea Vardi.)

Smith’s primary raison d’etre is the labeling of GMOs which he frequently states in presentations to other activists is the means by which a total ban on GMOs will be achieved:

“If even a small percentage of us start rejecting brands that contain them, GM ingredients will become a marketing liability… Food companies will kick them out… the fact is that only a small percentage of consumers can spark a non-GMO tipping point (leading…) to reclaiming a non-GMO food supply” – Jeffrey Smith, 2012 Prop 37 Rally.

The labeling campaign advocacy was begun by Craig Winters who originally housed Smith Institute for Responsible Technology under his “Coordinating Committee” (a.k.a., the Campaign to Label Genetically Modified Foods) formal organization and banner. Smith connected with Winters during his Maharishi Institute work and via his (former) boss John Fagan with Genetic-ID, a Raja (king) with the Maharishi movement responsible for “food purity.”

Smith derives his financial support through donations to his non-profit and via direct sponsorship. Major funding sources include nutraceutical industry lobby group Citizens for Health (run by Smith attorney and lobbyist James Turner) and various organic and natural product companies including Nutiva.

His anti-GMO publications and claims have been publicly sponsored via speaking events hosted and promoted to the media by the Organic Trade Association.[37]

Several academics have launched campaigns[38] to dissect and review Jeffrey Smith’s claims and criticize organizations and media outlets who report on his claims.[39]
Other skeptics of Smith’s attacks on genetically modified crops have called his assertions “pseudoscience” and have generally discounted the transcendental meditation and yogic flying bases of his claims

Jeffrey Smith grew up in New York City and then attended school at the Maharishi Institute for Management and has been cited as an expert in yogic flying. From 1983 – 1988, as part of the Ministry of Celebration and Fulfillment, Smith studied in the Maharishi’s Purusha program[40][41][42] program for the TM-Sidhi program approach to advanced meditation. Smith is credited with helping form the core of the U.S. “national Maharishi Effect|Super Radiance community” with TM and yogic flying demonstrations at the U.S. Capitol, World Bank and United Nations.[43] In 2002 (around the same time period in which he claims to have been an international best selling author) Smith filed Chapter 7 personal bankruptcy in Iowa Federal Court.[44] He resides in Fairfield, IA with his wife artist, jewelry maker and dance instructor Andrea Vardi (Maharishi Institute ’78).[45]