Both sides of the debate over genetic modification in animals — “Frankenfish” included — tend to make it sound like this is untrodden ground. False novelty can serve either ideological side, drumming up fear or hope. But the fact is, genetically modified animals have been in development for decades.

What follows is not a comprehensive list, but a tour of the reality of genetically modified animals in the world today.

Although AquaBounty’s salmon awaits approval, a transgenic fish has been introduced into the marketplace. GloFish started out as environmental monitoring tools, modified zebrafish which would fluoresce in the presence of certain environmental contaminants. Today their fluorescence has been switched permanently “on” and GloFish are marketed to aspiring transgenic pet owners in colors like “Starfire Red” and “Galactic Purple.” Because they are not for human consumption, they did not require approval by the Food and Drug Administration. They’re available across the U.S. with the exception of California.

Genetic modification is being used to develop super-sized farm fish, including species of tilapia in Cuba and carp in China. The basic template for is to borrow genes regulating growth hormones from a faster-growing cousin of your target species. These transgenic fish grow much faster than their unmodified kin — up to thirty-five times faster, in the case of a mud loach developed in Korea.

In livestock, there is a long history of using genetic engineering to modify the mammary glands of sheep, goats and cows. The first study of lactating transgenic farm animals was in 1989, more than 20 years ago. Sheep were engineered to produce the blood-clotting factor IX as a treatment for haemophilia.

China has emerged as the world research leader in transgenic animal research, reportedly committing $800 million on a variety of projects. It’s experimenting with mixing human and animal genes. It recently announced the birth of 300 cows that are physically indistinguishable from unmodified stock but produce a milk that is essentially human in its composition.

Argentina’s Bio Sidus, a world leader in creating pharmaceuticals from cultured cells, was also one of the first groups to engineer cows to produce human-like milk and has since pursued transgenic cows to produce insulin and human growth hormone. Many scientists believe that using whole animals as biological factories for pharmaceutical chemicals is much more cost-effective and stable than using cultured cells.

New Zealand’s AgResearch has been working on cancer-fighting biopharmaceuticals through collaborative ventures with GTC Biotherapeutics and Pharming NV to create cattle that would produce Herceptin for breast cancer treatment and for goats producing cetuximab, which targets head and neck cancer. 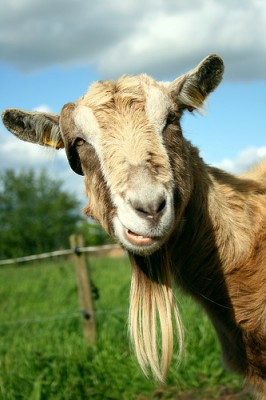 Brazil is emerging as an animal research super power, headquartered at State University of Ceará, which has become the new home for the transgenic goats developed by James Murray at the University of California in Davis. They are engineering goats to produce milk that contains an extra protein that helps prevent diarrhea or human granulocyte colony-stimulating factor, which stimulates bone marrow growth.

In search of a way to harvest spider-silk’s incredible mechanical properties for industrial application without “milking” millions of spiders, scientists at Utah State University transplanted a gene into goats that allows them to produce milk containing an extra protein. This protein is then extracted and spun into spider silk thread. (The goats lack the biological machinery to actually spin silk). It’s feasibility is still being evaluated.

Although Europe has been generally hostile to bioengineering, it is home to a few projects.

Almost any aspect of an animal’s biology is fair game for targeting engineering. The University of Guleph (Canada) created — and trademarked — an “Enviropig” designed to better digest plant phosphorus and therefore produce more eco-friendly manure with less risk of phosphorous-rich runoff contaminating freshwater. The first bioengineered pig was created in 1999, and the pigs were approved by Canada’s Department of the Environment of the Canadian Government in 2010. The project is now on indefinite hold with a loss of funding in early 2012.

Many of these animals are in the development stage, awaiting government approval. That may be slow in coming, particularly in the United States, with its byzantine approval process. The only product created from a transgenic animal yet approved by the FDA is ATryn, an anticoagulant derived from the milk of transgenic goats, which was approved in 2009. “Although the product had previously been approved in Europe, GTC Biotherapeutics of Framingham, Massachusetts, [was] the first company to have a transgenic animal drug approved for US use,” according to a report in Nature Biotechnology.

According to a comprehensive report in the Australian science magazine Cosmos, numerous genetically engineered pharmaceuticals may be on the horizon, particularly antibodies. Cuban scientists received approval to market the world’s first plantibody human vaccine, a vaccine for hepatitis that is produced in transgenic tobacco plants. Tobacco plants have also been found to effectively bind to Streptococcus mutans, the bacteria that play a major role in tooth decay, and prevent them colonizing the tooth surface. A new product taken from the tobacco plant, called CaroRX, is registered in Europe as a medical device. But its developer Planet Biotechnology says they now need a European distribution partner and additional funds to pursue a U.S. registration. In 2006, Mexican scientists reported that they had successfully used transgenic corn containing a viral gene to protect chickens from the potentially fatal Newcastle disease, a contagious bird ailment affecting chickens and other avian species.

By and large, modern genetic engineering is extremely precise; it’s a targeted, controlled procedure — often involving the addition of only a single gene to produce an extra protein.

Not one of these animals has been implicated in any environmental problems.

Kenrick Vezina is a writer and editor for The Genetic Literacy project, as well as a freelance science writer, educator, and critic.