EuropaBio, the European Association for Bioindustries, which includes companies from research and development, testing, manufacturing and distribution of biotechnology products released a graphic called: Top ten statistics on GMOs

Half a century is the combined undue delay incurred by the European Commission by breaking timelines set in EU legislation for the authorization of GM crops. Did you know that governments have issued thousands of GM product authorizations based on scientific safety assessments, and that GM crops are being grown globally on a significantly larger scale than the EU’s entire arable crop agriculture? Find out more from the attached top ten statistics on GMOs. 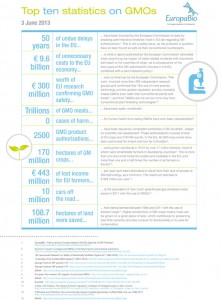