Diet soda and sweeteners alter gut bacteria, contributing to obesity? Not so fast.

A study in Nature and a host of derivative pieces across the Internet have created somewhat of a niche market for making it once again fashionable to avoid artificial sweeteners. The article claims that diet sodas may alter gut microbes in some people in a way that determines whether saccharin triggers glucose intolerance, which could increases the risk of metabolic diseases such as Type 2 diabetes.

While indeed it may be true that gut microbiota can be influenced and adapt to large doses of artificial sweeteners, this is unsurprising – and in fact to have suspected otherwise would be surprising. The gut microbiome rapidly adapts to changes in the human diet, whether it’s a change from drinking water to drinking soda (diet or sweetened with sugar), or a vegetarian switching to a meat-based diet (or vice versa); the adaptability of the gut microbiota is what ensures their successful survival and proliferation.

In fact, researchers determined that giving test subjects meat “rapidly and reproducibly alters the human gut microbiome.” So a study suggesting that high doses of artificial sweeteners wouldn’t have an impact on microbes shouldn’t be surprising. Part of the reason this becomes a significant result is that the measured scope of the study is so small (framed with such specificity): For example, using high-resolution analytical equipment on surface cells in the human tongue while test subjects were given glasses of ice water to drink would show that cell osmolality is dramatically altered, making the extracellular space necessarily hypotonic, which stresses the cells; in addition, the low-temperature water creates a significant cascade of cellular communication by cell-signaling done by certain proteins (such as cytokines), and depending on the integrity of certain cells across the tongue surface lamina, the exposure to the cold water may lead to their death.

The practical result of all this is that our tongue feels cold and our thirst is quenched. Which brings up the next important factor of interpreting scientific results: Just because it can be measured doesn’t mean that it matters. This becomes more-and-more true as our analytical equipment and technologies become ever more sensitive: We can now discriminate certain lab measurements to parts-per-trillion or parts-per-quadrillion. Just because there may be a detectable trace of something doesn’t mean that it’s at all important.

For example, the xx guidance for the ability to be branded ‘Gluten Free’ is 20 parts-per-million (ppm). While this is relatively low, it’s not zero. But it is low enough to prevent measurable immunogenic response in a vast majority of subjects. So for example, in a separate study, levels of HbA1C for very heavy users of artificial sweeteners were associated with very slight increases in HbA1C levels. Given the sample size used and the precision of the measurement, this ‘increase’ may be a spurious signal, and not actually be indicative of an actual change. And besides, is a change in HbA1C (especially a miniscule change) actually indicative of anything?

The Mayo Medical Laboratories have published a small analysis showing a correlation between HbA1C levels and estimated average glucose. However, the Mayo Clinic even mentions that there is a great deal of variance in the measurement (analytical issues), an ‘adequate cutoff’ [for determining significance] has not been determined, some conditions (uremia, transfusion, and anemia) can adversely affect it (and weren’t controlled for in the above study), and only a limited number of studies have been done on HbA1C. So the HbA1C measurement is not a validated or reliable measure to make any determinations from. Add to this that the causal factors for Type 1 and Type 2 diabetes are different, and the HbA1C correlation does not distinguish, making its power for interpolating differences even lower.

Most concerning and insidious of all is that between the unreliable HbA1C proxy for diabetes, an extraordinarily small sample size was used (seven participants). The participants were given the equivalent of about 10-12 packets of artificial sweetener and about half (four out of the seven) had changes in blood glucose. So-called ‘stable’ blood sugar levels can fall around 10-15% of baseline normally with no adverse factors occurring externally – so associating disturbances in blood sugar (in only a handful of subjects) with dosing of artificial sweetener is a stretch indeed, especially at this point. It’s much more likely to be systematic error from the analysis, and the authors trying to find patterns in their data where none exist.

Another interesting argument that’s always used by those opponents of artificial sweeteners (for example diet soda) is that they contribute to such problems as fibromyalgia, lupus, brain tumors, headaches and bloating as well as stomach upset. Of course the data tell a different story: A study published in the early 1990s which attempted to correlate artificial sweeteners (aspartame) with brain tumors (glioblastoma and others) is considered entirely erroneous.

Again it’s the problem of correlation not being the same thing as causality – and when this happens, it means there are unidentified, unmeasured variables in the mix. New York University professor Charles Seife published a paper showing that he could correlate brain tumors to United States government deficit spending. Interestingly, while rates of brain tumors ‘increased’ minimally in the population around the time that certain artificial sweeteners were being used, there was also a parallel increase in the number of MRI imaging machines put into service in hospitals and clinics. So it’s more likely that the increased findings of brain tumors were instead related to… the increased screening for brain tumors.

For example, if I plot seven participants, as in the sample size used in one of the diet soda studies, we may see a nice fit to the data pattern, as one I created here: 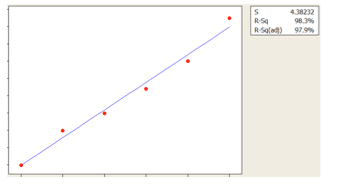 However, if I include a wider and more representative data set… The pattern disappears! 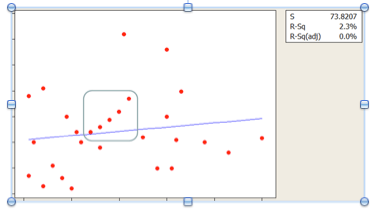 I’ve put a box around the original, very small, sample size (above) to show you that, in the context of a larger respondent pool, it’s not telling the full story, and the localized model that described the limited data before is now all but useless.

For example: in baseball statistics, if you see a pattern, look at a wider data set to see if that pattern still holds; There are many examples of batting averages of .500, .700, or even higher with very few at-bats – but that pattern never holds as the season wears on.

What does the clinic tell us about real life?

Also, in the world of clinical trials for new drug treatments, both the treatment groups and placebo groups are monitored for side effects – headaches and stomach upset are two of the most-frequently reported symptoms across all clinical trials in the treatment groups and the placebo groups. So people like to report headaches and stomach upset no matter the conditions, and those would be two of the most common psychosomatic effects.

The next big thing beginning to circulate in the nutrition industry is the acronym FODMAP: Fermentable Oligo-Di-Monosaccharides and Polyols. These are short-chain and simple sugars and sugar alcohols (such as sorbitol, xylitol, mannitol, etc. which you can find in, for example, sugar-free chewing gum). The theory goes that these FODMAPs are poorly digested and absorbed in the small intestine, and so some pass to the large intestine where they become fermented and can cause bloating and digestive discomfort. If you look at the list of FODMAP-containing food sources, it’s so broad as to be not realistic as a source of widespread issues. Even non-celiac gluten sensitivity may not exist, as discussed here. In this referenced study, a researcher rotated subjects through a variety of different diets and found “absolutely no specific response to gluten,” which included those subjects who reported ‘gluten sensitivity.’

Don’t claim to find patterns where none exist

There’s an old adage in medicine and healthcare which is appropriate here: When you hear hoofbeats, think ‘horses,’ not ‘zebras.’ There have been so many specific studies performed on artificial sweeteners of all kinds and classes, which had rigorous study designs, and have demonstrated robust safety profiles – like I mentioned above with the thought experiment of the ice water and the unprecedented measurement accuracy our laboratory devices can achieve now, just because we can detect changes at the sub-cellular level doesn’t mean that there is any macro-scale negative impact. The overwhelming factor in weight loss is the simple thermodynamic calculation of calories being consumed versus calories expended (by basal metabolic rate in addition to any activity or exercise).

Diet soda contains no calories so it’s not providing any effect to the left-side of the equation (the calories-in). As far as any changes in the microbiota are concerned: The microbiota changes with any changes to the diet, so again just because we can measure it, doesn’t necessarily mean there’s any overall effect. Similarly, there was a great deal of shock-media from a decade ago about potato chips generating acrylamide during the cooking process which could be carcinogenic – we can try to impute any number of irrelevant risks into as many facets of our life as we choose; But we’d be much better off as a society to deal with our biggest real risks such as by being attentive and wearing seatbelts while driving, exercising for cardiovascular benefits, and vaccinating children.