How the human immune system resets after Staph infection

When pathogenic bacteria like Salmonella or Staphylococcus invade our bodies, we go into a state of high alert and alter our metabolism to defend against the attack.

Yet sometimes that war doesn’t stop and we stay on immunological high alert, wasting energy on an attack that isn’t there rather than repairing the damage done by bacterial invaders.

Researchers have uncovered the genes that should normally be activated during recovery from bacterial infection. By finding ways to “jumpstart” the recovery process it may be possible to fend off autoimmune diseases and chronic inflammatory disorders that can result from the body staying in attack mode for too long. 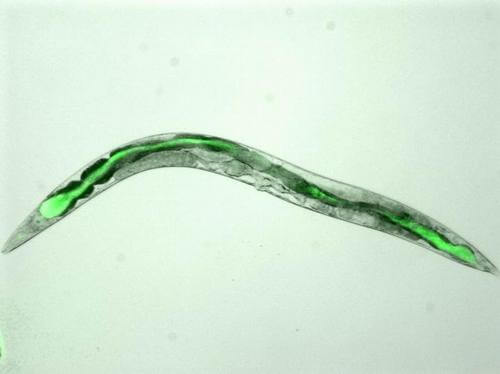 Duke researchers have uncovered the genes that are normally activated during recovery from bacterial infection in the C. elegans worm. The finding could be key to new antibiotics and countering auto-immune disorders. Credit: Duke University, Alejandro Aballay

“While the steps involved in recognizing microbial pathogens and inducing the immune response have been extensively studied, the pathways involved in host recovery after an infection are not well understood,” said Alejandro Aballay, Ph.D., an associate professor of molecular genetics and microbiology at Duke University School of Medicine.

To examine the biological changes associated with this transition from wartime to peacetime, Aballay and lead study author Brian Heard, PhD, a postdoctoral fellow in his lab, infected the worm C. elegans with the common bacterial pathogen Salmonella enterica.

The researchers used gene chip technology to identify genes in the worm that were “turned off” or “turned on” during that initial infection. Then they treated the worm with the antibiotic tetracycline and looked to see what genes were dampened or activated as the organism recovered from infection.

They discovered that as the infection resolves, genes involved with stimulating the immune response were turned off, while genes involved in returning to business as usual — a process known as “cellular homeostasis” – were turned on. These recovery genes play important roles in repairing tissue damage, eliminating bacterial toxins and clearing the cellular fighters that could cause excessive inflammation and further harm tissues.

When the researchers looked closer at the genes involved in recovery, they discovered many were controlled by the ELT-2 transcription factor, a type of master switch that had already been shown to regulate when and where immune response genes were expressed. The researchers showed that shutting down this master switch prevented infected animals from recovering with antibiotic treatment, showing that ELT-2 functions not only in defense but also in recovery.

“Our studies indicate that host or bacterial signals during the initial decline in infection may shift ELT-2’s duties from priming the innate immune to protecting against chemical insults,” Aballay said. “This opens a number of possibilities for further research.”

Aballay says a number of studies in C. elegans have shown that the worm’s nervous system, which can respond rapidly to all sorts of environmental stimuli, is ultimately responsible for activating the immune system in response to bacterial infection. So now he plans to conduct experiments in the worm to determine whether the nervous system also controls the recovery after infections have been cleared.