Which tastes better: Conventional or organic foods? A tale of two apples

When faced with questions of choice, people default to emotion, opinion, and simple mental models – all of the things considered ‘heuristics’ which allow our brains to not needlessly spend resources when making quick decisions.

Many studies (e.g., here) have broached the topic of the taste and ‘quality’ of organic food versus conventional. Robustly, The American Journal of Clinical Nutrition, the Journal of the American Medical Association (JAMA), as well as Stanford University School of Medicine compared organic produce with their conventional counterparts and found no significant differences.

Anything considered ‘scientific’ should attempt to free itself of these biases and heuristics as described above, and be based on empirical evidence – real evidence collected by study and distanced from opinion. Figure 1 below shows two single-blinded apples, both Red Delicious; one is organic, and one is conventional. 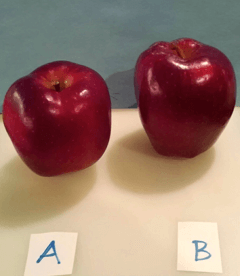 While food tasters (casual and serious) can be made to think that fast food is high-end organic simply based on its presentation (see this hilarious video that ran on the GLP recently in which foodies assumed that McDonald’s food was organic merely because of how it was presented, here), and several studies have shown that cheaper wine put into bottles labeled of more expensive wine will be rated higher by wine tasters. Or maybe vodka? Here and here and here.

We are our biases, so what does that say about our food choices?

Perhaps the interior characteristics are different between ‘A’ and ‘B’, and Figure 2 shows just that – the sections of the two apples. It’s reminiscent once again of the power of suggestibility in food and beverage industries. 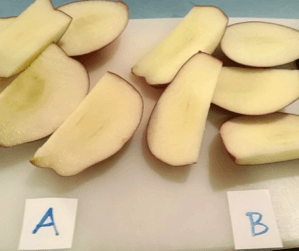 For example, in the famed ‘wine triangle,’ expert wine tasters often have a hard time telling which wine is ‘different’ when faced with three wines – two are the same and one is different (a specific example of sensory triangle testing). Another one which stymies even expert tasters is blindfolded taste-testing – often blindfolded tasters do barely better (and sometimes worse) than chance when tasting upwards of 20 different flavors and asked to tell what each one is.

Finally, to describe the flavor of each sample is almost superfluous and beside the point. Figure 3 below shows the un-blinded reveal of the two apples. 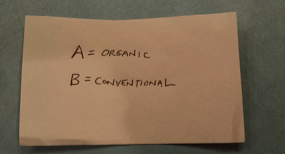 Interestingly, regardless of your initial guess of which was which, the psychological phenomena of cognitive dissonance and expectation bias will have you explaining it away in either case; Either you guessed correctly and you think ‘good job, what an obvious test’ or you guessed incorrectly, and you figure that the test was somehow rigged, or the sample size was too small, or the two sample apples were chosen specifically to throw off the guessers. In either case (correct or incorrect), there was insufficient information provided to repeatably tell the difference so it was just that – guessing.

In fact, based on the many studies examining taste differences and nutritional content of organic versus conventional produce, and the incredible level of suggestibility in the field of taste profiling (such as some great work from University of Illinois U-C and Universiteit Leiden), perhaps there is no way to tell the difference. So understand that social ingroups will create their own preference architectures and if you find yourself in this position, perhaps enjoy it for the very fact that biases are altering your perceptions – but don’t take those perceptions as incontrovertible truths.

Ben Locwin, PhD, MSc, MBA, is a Contributor to the Genetic Literacy Project and is an author of a wide variety of scientific articles for books and magazines. He is also a researcher and consultant for a variety of industries including behavioral and psychological, food and nutrition, pharmaceutical, and academic. Follow him at @BenLocwin.