There is a common myth that biotechnology is moving agriculture away from sustainability. In many documented cases, genetically modified crops actually decrease a farmer’s reliance on pesticides, fertilizers and other production inputs. Scientists around the world are researching how genetic engineering can be used to stop plant diseases that threaten agricultural production in key growing regions. Biotechnology could be the answer to preventing wheat stem rust in Africa, wilt disease in bananas in Uganda and blight in Irish potatoes.

It’s a critical sustainable technology in the United States, particularly in disease-vulnerable fruit and vegetable growing regions. Breeding innovations are desperately needed in Florida, where the warm, humid climate creates ideal conditions for disease-causing bacteria and fungi to flourish. Florida is an important state for off-season production, when the weather makes farming profitable for growers that can farm when the rest of the country cannot.

Here are three GMO innovations that could not only prevent devastating and costly plant diseases, but also could increase the sustainability of Florida farming.

Florida is one of the largest producers of fresh market tomatoes in the United States. Florida’s climate allows tomatoes to grow even in the winter months, which makes it possible for fresh-market tomatoes to be available for Americans year-round at a low cost. Florida’s profitable tomato industry 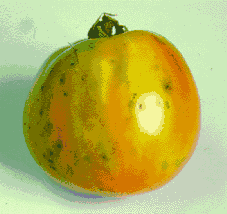 is now threatened by serious outbreaks of bacterial spot disease. The bacterial disorder is caused by a number of bacterial species, which leads to one of the most devastating diseases in tomatoes and peppers worldwide. It especially thrives in Florida’s warm temperatures and wet climate. The infection causes lesions on the plant’s leaves and fruit, and the results are often total crop loss. According to a 2012 study from the University of Florida, 97 percent of Florida’s tomato producing acres are infected every year.

Current methods of control include application of the antibiotic streptomycin or potentially toxic copper-fungicide mixes, but Florida’s high temperatures limit their efficacy. Genetically improving tomato plants with innate resistance could be a better strategy to prevent the disease or lessen its impacts

Scientists from various public research institutions have identified a protein in bell peppers that limits the disease’s virulence. Peppers and tomatoes are closely related, so a gene that works well in the pepper could provide resistance in tomatoes as well. The gene encoding this protein, known as Bs2, was introduced into tomato to create a transgenic tomato line, which has been proven effective at resisting the disease in multi-year field trials.

Adopting Bs2 would also keep the farmer from introducing bactericides and copper-based chemicals, which are commonly used in organic farming because they are “natural”, into the agriculture system. Copper can easily build up to toxic levels in the soil and is very difficult to remove. Once it is present, copper toxicity can plague a field for many years. The Bs2 tomato would reduce the potential for environmental contamination.

Florida has always been known for its high-quality citrus. The industry contributes $9 billion to the economy every year and supports 76,000 jobs across the state. But the future of the second-largest citrus producing region in the world is in jeopardy. Citrus greening disease, also known as Huanglongbing, is poised to wipe out every Florida grove within the decade. A recent National Geographic article estimated that 80 percent of Florida’s citrus crop is already infected.

Citrus greening is a bacterial disease that is spread from tree to tree by the Asian citrus psyllid, a small insect that is present in Florida in massive numbers. The bacterium infects parts of the plant’s 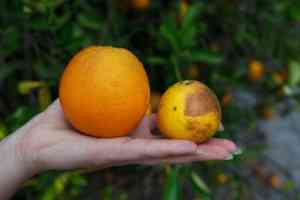 vascular system and starves the tree of essential nutrients, resulting in fruit that is green, bitter and unsuitable for sale or juice production. Trees also drop fruit prematurely, and once a piece of fruit touches the ground, it cannot be sold. An infected tree may be symptom free, but may transmit the disease. Infected trees almost always die within a few years.

Because an insect vectors the disease, farmers have tried to control it with synthetic pesticides, but this only increases a reliance on chemicals and cultural inputs. Farmers have also improved tree health with added nutrition, which is expensive and adds additional chemicals to the environment. Many citrus producers are resigned to just continually replace infected trees. Citrus trees can live up to 50 years, so replacing them every 5-10 would increase production costs to unsustainable levels.

Researchers at Texas A&M University have discovered proteins in spinach that limit the pathogenic effects of a variety of bacteria and fungi. By incorporating a select number of these proteins into an orange tree’s DNA, they created trees that are resistant to citrus greening. After five years of field tests, even first-generation trees are still thriving.

University of Florida researchers have added a series of citrus and other plant genes to citrus plants in the hope of identifying a solution. Several show promise, preventing infected trees from showing symptoms after several years when the corresponding control trees have died. The large cross-section of mechanisms tested means that multiple resistance gene strategies might be employed, and limits the likelihood of pathogen resistance development.

The widespread adoption of these trees would prevent added pesticide use and slow other chemicals from entering the environment. They would improve the number of profitable years a grower can get from one tree and decrease the amount of organic waste leaving the farm as infected trees are destroyed. A transgenic citrus plant could decrease grower’s reliance on cultural inputs and move citrus farming closer to sustainability.

Transgenic papayas have been grown commercially in Hawaii since 1999. Hawaii has been a major producer of papayas since 1910, with an average production of 50.3 million pounds per year in 1992. Hawaiian papaya production was almost cut in half by an outbreak of papaya ringspot virus in the 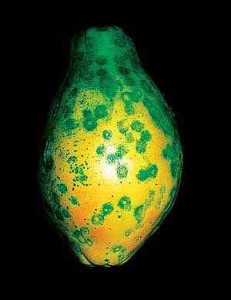 early 90s, with no long-lasting method of control on the horizon.

Researchers from Cornell University and the University of Hawaii were able to create a virus resistant crop by installing a portion of viral sequence into the papaya genome- only in a reverse orientation. The result is a viral genetic sequence that in essence cancels out necessary viral gene expression through the mechanism of RNA interference. This approach, known as RNAi, works like a vaccine and stops viral proliferation in the papaya. The federal government approved the transgenic papaya in 1997, and it now makes up 77 percent of Hawaii’s papaya crop.

The genetically modified papaya has brought surprising environmental benefits to Hawaii, especially for organic papaya farmers. The virus is transmitted when aphids feed on infected papaya plants, but the virus can’t survive within the aphid for very long. To successfully pass on the disease, there must be a healthy tree to feed on nearby. The transgenic resistant papaya plants has created a buffer zone around non-transgenic varieties and minimized the risk for infection. Genetically modified papayas are also reported to improve pest management and help control water intake in nearby acres of non-transgenic crops, reducing the need for chemical pest controls.

Transgenic papayas could bring the same benefits to Florida papaya farmers. A recent University of Florida analysis noted that South Florida offers the best potential for commercial papaya production in the continental U.S. Florida’s subtropical climate has the ideal conditions to sustain a profitable crop year-round, unlike other papaya-producing regions in California and Texas that can produce only in the summer.

Unfortunately Florida’s papaya industry is severely limited by potential infection from papaya ringspot virus. Because of the virus’s genetic diversity, the variety of papaya that’s flourishing in Hawaii is still susceptible to the strain infecting South Florida. Plants resistant to the Florida strain of the virus are needed. In 2003, researchers at the University of Florida began work on a papaya that could withstand Florida’s viral strain, but it is still awaiting regulatory approval today, more than a decade later.

Florida farmers provide the nation with specialty fruits and vegetables during winter months. Tomato, citrus and papaya farming in Florida face are just three of many examples where disease limits production, increases the costs of farming, and requires solutions that have potential environmental impacts. While biotech solutions have been valuable in large agricultural acreage, they have seen limited application in horticultural crops. These three examples represent available technologies that have not reached application, but could offer considerable increases in sustainability if implemented.

Amanda Kastrinos is an undergraduate student at the University of Florida studying soil and water science. She writes on genetic applications in agriculture. Follow her on twitter @MandiLKastrinos