As the average age of the population increases, largely as a consequence of greater life expectancies, senile health conditions become manifest in greater numbers. According to U.S. Census Bureau figures, median age (a measure of average) of the U.S. population grew from 35.3 years to 37.2 years between 2000 and 2010. 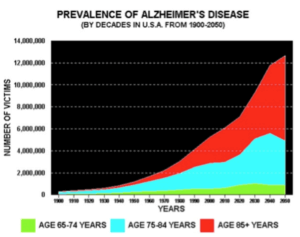 One of the most pressing healthcare conditions facing an aging population is Alzheimer’s disease, a condition characterized by a lack of certain memory and cognitive function. Though aging doesn’t itself cause Alzheimer’s disease, more people will develop Alzheimer’s disease later in life (refer again to figure 1 above). There are some associations with processing cells and areas of the brain responsible for spatial relationships and other closely linked ones for memory.

The top candidate for causality in Alzheimer’s disease is a buildup of beta-amyloid plaque, which causes dysregulation in certain brain regions. These are caused by protein misfolding (proteopathy) of segments of what is called amyloid precursor protein (APP). APP is in its undamaged state a very 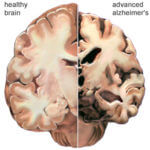 important part of healthy neuronal tissues; it’s the misfolding of the enzymatically-cut pieces of APP that leads to development of the plaques. Treatments therefore, would strive to prevent the formation and deposition of these beta-amyloid plaques to keep the progression of the disease in-check.

There are several candidate drugs being explored to help the future cases of this disease, with a goal of complete remission, or even prevention. In the meantime, some natural cures have been touted, with specious results. There is an amazingly simple dietary intervention which has been looked at to prevent cognitive decline associated with Alzheimer’s disease: apple juice.

Researchers from Center for Cellular Neurobiology; Neurodegeneration Research University of Massachusetts, Lowell, have performed a series of small studies published in the Journal of 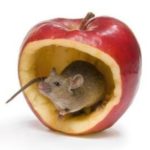 Alzheimer’s Disease looking at the performance of mice in maze trials and found that those mice which received the human equivalent of about 2 glasses of apple juice per day performed better in maze trials as they aged compared with control (non-treated) mice.

The hypothesized link was indeed beta-amyloid plaques, and the researchers did indeed correlate apple juice intake with lower production of beta-amyloid (caution is still needed in interpreting correlation).

The lead researcher in the study observed, “These findings provide further evidence linking nutritional and genetic risk factors for age-related neurodegeneration.” As I’ve written about before, the relationship with individual genotypes and environmental exposures is one that will continue to have a huge increase in coverage within literature over the next several years, as we are only beginning to circumspect what this line of study will offer to the field of risk-based medicine.

Ben Locwin, PhD, MSc, MBA is a contributor to the Genetic Literacy Project and is an author of a wide variety of scientific articles for books and magazines. He is also a researcher and consultant for a variety of industries including behavioral and psychological, aerospace, food and nutrition, pharmaceutical, petrochemical, and academic